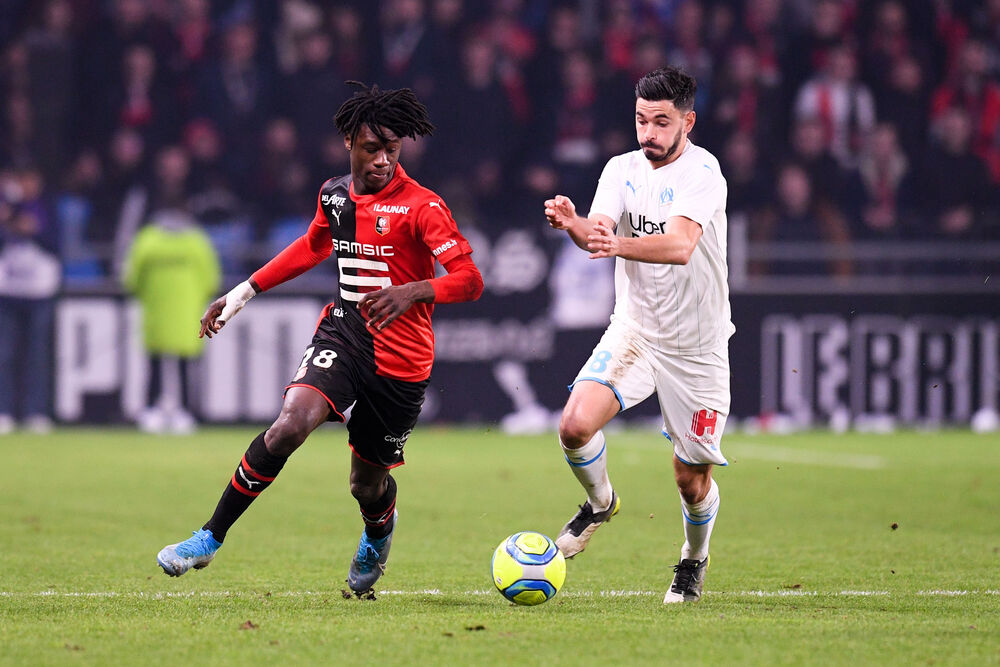 Having made his debut in April, the teenager has gone on to establish himself as a key man in the heart of the Rennes team, despite his tender years. Now recognised as one of the most exciting prospects in European football, plenty of eyes will be on Camavinga in 2020.

The midfielder made his first appearance for the senior team on 6 April 2019, coming on as a late substitute in Ligue 1 match against Angers. That appearance, at the age of 16 years, 4 months and 27 days, made Camavinga the youngest player to appear for Rennes’ first team, as well as the first player born in 2002 to appear in a league game in one of Europe’s top five leagues.

While he had limited first-team opportunities throughout the rest of the 2018/19 season, it wouldn’t be long before Camavinga truly made his mark on the team. Having renewed his contract during the summer break, Camavinga’s name hit the headlines following his performance in Rennes’ shock 2-1 victory French champions PSG on 18 August.

Up against the likes of Kylian Mbappe, Edinson Cavani and Marco Veratti, Camavinga produced a stunning display in the middle of the park, completing 40 out of 41 passes and providing an exquisite assist for Roman Del Castillo’s winner. He was named man of the match and had announced himself to the world at the age of just 16. The following morning he was back at school studying for his baccalaureate.

The 16-year-old put on a stunning display against PSG last night, including this utterly sublime assist for the winner!

Having started both Rennes’ other two games that month, a 1-0 away win over Montpellier and a 2-0 victory over Strasbourg, Camavinga’s performances earned him the Ligue 1 Player of the Month award, making him the youngest to achieve that feat. He has continued to impress in the following months, scoring his first senior goal in a 1-0 victory over Lyon in December and becoming Rennes’ youngest Ligue 1 scorer in the post-war period.

Camavinga is going to be some player 🤩

What were you doing at 17? 👶 pic.twitter.com/PTJyIqlyp4

Camavigna’s performances in the Rennes midfield have been a key factor in the club currently flying high in third place, six points clear of Lille in the race for a Champions League spot. Having picked up three man of the match awards, he possesses calmness that belies his age, acting as a controlling influence in the middle of the park.

Operating mostly as a holding midfielder in either a 4-4-2 or 5-3-2, Camavinga is tasked with screening the defence, retaining and recycling possession, and dictating the tempo of games. In possession, the 17-year-old is quick and decisive in his passing and clever in his movement, attributes that have enabled him to excel in a role generally associated with older, more experienced players.

This passing range extends from fast and short lateral passes to his midfield partner, the progressing fullbacks or to either centre-back to retain possession. However, Camavinga also possesses the ability to deliver cutting key passes to the Rennes’ forwards, evidenced by his assist against PSG.

Top rated teenagers in each of Europe's top five leagues:

Camavinga’s potential has been evident from an early age. Landry Chauvin, Rennes’ former academy director, says: “Since he joined us at 10 years old from a local club, he was destined for great things. He was always ahead of everyone else in his age group but also everyone else one or two age groups above in terms of talent, intelligence and maturity.”

In the match against Lyon, Camavinga dominated the midfield completing 44 passes with 90% accuracy. He also completed 3 dribbles that relieved pressure on his team and included the take-on that led to his match-winning strike. Camavinga ranks among the most fouled players in Ligue 1, winning six against PSG and averaging 2.5 fouls per game, highlighting how his control and intelligence enable him to win his team respite when under pressure.

While naturally comfortable on the ball, Camavinga is also more than happy to get involved with the other side of the game. The teenager averages 4.6 tackles per game, which is not only the most in Ligue 1, but the second most across the top five European leagues, according to Whoscored. He willingness to work hard to win his ball back for the team has been a crucial asset for Rennes’ in the side’s ascent up the table.

Eduardo Camavinga has averaged more tackles per game (4.6) than any other player in Europe's top five leagues

The way in which the teenager has adapted to the men’s game has even caught his manager, Julien Stéphan, by surprise: “Eduardo’s case is a particular one because he is still at school. He’s studying for his baccalaureate this year. He’s playing a lot, more than what we had imagined at the start of the season, far more, if I am being totally honest. We had a few injuries, and then he became so important in midfield that it’s now difficult to play without him.”

Indeed, Camavinga has shown tactical intelligence and consistency very rarely associated with midfielders at such a young age, and he’s been referred to as a natural leader by former France international Mikael Silvestre. After a man of the match display against Marseille in September, Camavinga said that his fearlessness comes naturally to him: “I’ve always been like that. I was often moved up a year, so playing with bigger players doesn’t scare me.”

Eduardo Camavinga compared to U21 players in Europe's top five leagues this season:

Camavinga has also been used further forward at times, and his coach has highlighted his adaptability: “If I need an eight who breaks the lines and who runs, I’ll put him there. If I need to have someone in front of the defence who’s stronger at winning the ball and more aggressive, I can put him there as well.”

Hatem ben Arfa, who played with Camavinga last season, echoes his former coach’s sentiments, telling ESPN: “He was incredible. Technically and physically, he is a monster. Everything he does is perfect. For me, he is the modern midfielder by definition. There’s nothing he can’t do. He can defend tackle, head the ball, create, score, assist. He is powerful but gifted technically with his left foot. He is intelligent, elegant.”

Having obtained French citizenship in November 2019, Camavinga was called up to the French under-21 team just six days later, starting a 3-2 win over Georgia. While he will likely need to be patient with regards to making his senior bow, considering the midfield riches at manager Didier Deschamps’ disposal, there’s no doubting Camavinga has the potential to make it at the very top level.

Camavinga’s impressive performances at such a young age have naturally attracted admiring glances from across the continent, with the likes of Real Madrid and Manchester City rumoured to be keen on the midfielder. Rennes president Olivier Letang has confirmed the club has received approaches but has stated his desire to keep hold of Camavinga for the next ten years.

That will most likely not be the case if Camavinga continues his current upward trajectory, but for the time being, Rennes is the perfect place for the midfielder to develop. Indeed, Stephan has warned the youngster of the risks that come with taking the leap too early: “We have to protect him from media exposure and all the interview requests. That doesn’t mean hiding him because you can’t hide a player, but we have to allow him the time he needs to grow. A lad of 17 still has a lot to learn, both on the pitch and off it.”

“A first season is never easy, but it’s not what is most difficult either. Following it up is much tougher. That’s the reason why I think it would do him the world of good to stay another season with us.” Stephan may be right, but should Camavinga’s 2020 follow a similar path to last season, Rennes will only be able to hold on to the starlet for so long.