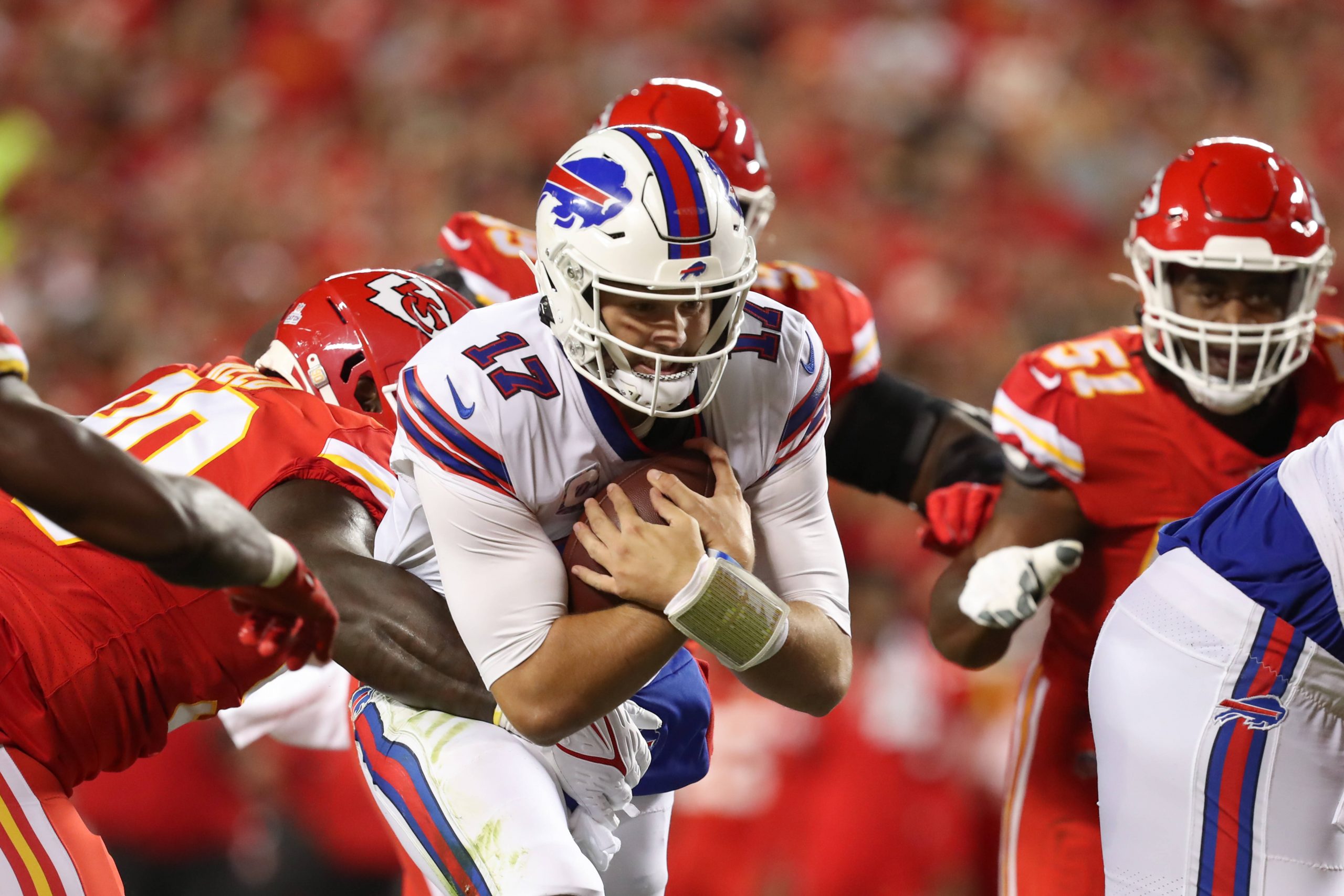 They also took the Kansas City Chiefs’ title as the team to beat in the AFC.

Buffalo is now listed at +250 to win the conference, per DraftKings on Oct. 11, surpassing Kansas City for the first time this season.

Despite a 2-2 start, the Chiefs were still given the benefit of the doubt by oddsmakers based on their sterling history with Patrick Mahomes as the quarterback. But after the 38-20 loss, Kansas City is now +350 to win the AFC.

The Bills have won four straight games and have a league-best plus-108 point-differential. Their strength of schedule was heavily questioned heading into the game against Kansas City, but Buffalo showed it has the ability to dismantle even the most talented of opponents.

The best teams ever through 5 games by DVOA. 2021 Buffalo Bills now No. 9. #BillsMafia pic.twitter.com/sPwX6exieA

Quarterback Josh Allen was 15-of-26 for 315 yards and three touchdowns, but it was the defense that was most impressive in the contest. Mahomes averaged only 5.2 yards per pass attempt and committed three turnovers.

The Bills’ defense is allowing only 12.8 points per game this season, which leads the NFL. The offense is scoring 34.4 points per contest, which also leads the league. That’s quite the combination.

The Bills went 13-3 last season but lost to the Chiefs in the AFC title game. They dropped this year’s opener to the Steelers but have since looked like the best team in the NFL.

The Chiefs, meanwhile, must fix a porous defense. Allen’s big day continued a season-long inability to slow opposing offenses. Mahomes, Tyreek Hill and Travis Kelce are still playing well, but the defense has not been able to come up with consistent stops.

Kansas City is going to be hard-pressed to finish as the No. 1 seed in the AFC, and is currently two games behind the Los Angeles Chargers in its own division. However, the oddsmakers still have the Chiefs with the second-best odds to make the Super Bowl in the conference.

There are three other teams that have realistic odds to win the AFC. The Baltimore Ravens sit at +550 heading into their Monday Night Football matchup with the Colts. The Cleveland Browns lost a shootout to the Chargers on Sunday and currently sit at +750 to win the conference. Los Angeles is the other main candidate with +800 odds following its 4-1 start.

The Bills are the new Super Bowl favorite according to Fanduel, but most books have Tampa Bay on top.

The Buccaneers are 4-1 on the season after dominating the Dolphins on Sunday, and are listed at +500 to win the Super Bowl by DraftKings. Quarterback Tom Brady threw for 411 yards and five touchdowns against Miami and is in the thick of the early-season MVP race.

When you throw for 400+ yards and five TDs pic.twitter.com/4XhGOOBhnp

Tampa Bay is currently trailing the Cardinals by a game in the NFC standings but has the easier schedule and is projected to eventually overtake Arizona for the top spot.

The Bills are listed at +550 odds to win the Super Bowl, followed by the Chiefs at +750. The Los Angeles Rams got back on track with a Thursday Night Football win over the Seahawks and are now listed at +800 to win the championship.

The Green Bay Packers and Ravens are tied for the fifth-best Super Bowl odds at +1200.

The top six teams were all regarded as Super Bowl contenders heading into the season, but a pair of NFC teams are attempting to crash the party.

The Cardinals remain the only undefeated team in the NFL after a 17-10 win over the San Francisco 49ers on Sunday. Arizona has the second-best point-differential in the NFL and has given up more than 20 points in a game only once this season.

The Cardinals entered the season as +4500 longshots to win the Super Bowl but those odds are now all the way down to +1400.

Find a better goal-line defense. We dare you. pic.twitter.com/dFz8qrqFwe

The Dallas Cowboys are in a similar boat. They are 4-1 on the season and seem to be cruising to the NFC East title. The aspirations in Dallas should be higher than that, as the team’s defense has made vast improvement from a year ago.

Trevon Diggs has six interceptions on the year to lead the way, and quarterback Dak Prescott has played fantastic football to lead the offense. The Cowboys’ Super Bowl odds are now set at +1500. They entered the season at +3500 to win the championship.