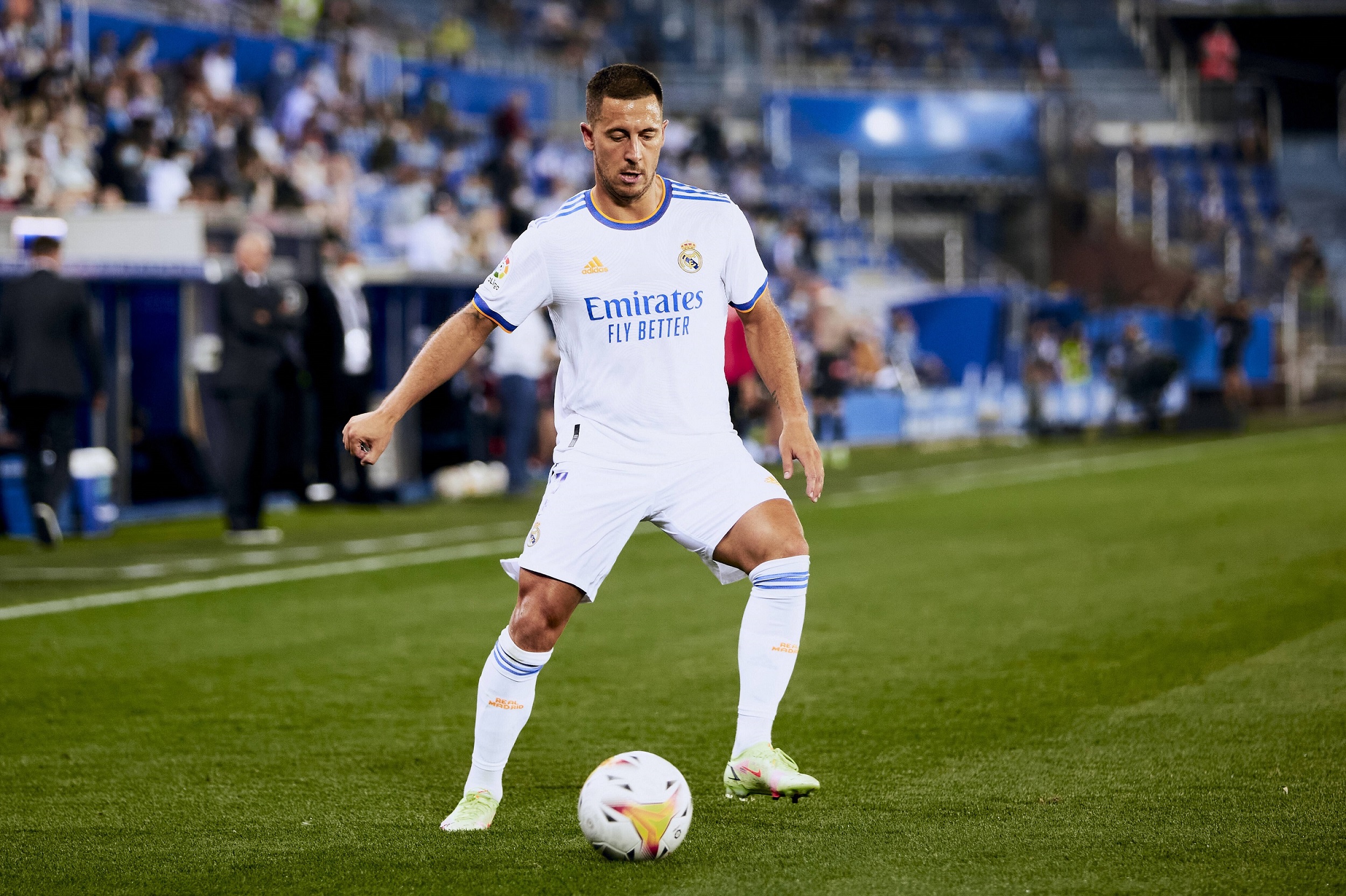 Two years is a long time in football, and that is certainly true for Eden Hazard and Real Madrid. In 2019, Hazard was the Spanish club’s €100m prize – Los Blancos’ most expensive ever signing and the man widely billed as the natural successor to Cristiano Ronaldo. The Belgian was Real Madrid’s first true ‘Galactico’ in a number of years.

Since then, Real Madrid haven’t spent a penny in the transfer market. The Spanish capital club, laden with close to €1 billion of debt, is currently more concerned with balancing the books than capturing ‘Galacticos.’ What’s more, Hazard’s dismal track record in all-white hasn’t exactly encouraged Real Madrid to re-enter the market for big-name signings.

There are, however, signs that Hazard is finally becoming the player Real Madrid bought him to be. When Carlo Ancelotti’s side started their 2021/22 La Liga campaign with a 4-1 win over Alaves, it was the 30-year-old who shone brightest. While Karim Benzema, Nacho Fernandez and Vinicius Junior provided the firepower in the form of four goals, Hazard brought the spark.

Deployed on the left side of a front three, Hazard was afforded the freedom to drift wherever he saw space. Most notably, the Belgian showed signs of an inherent, natural understanding with Benzema. The two were on the same wavelength, something that was clear in their link up for the opening goal.

“My ankle injury is a thing of the past, it’s already out of my head,” Hazard, who barely featured in his first two seasons at Real Madrid due to injury and fitness issues, said. “I enjoy playing with Benzema, we know each other very well and it’s easy to play with him. The feelings are good, I’m feeling good, we want to win La Liga this season.”

🗣️ Hazard: "My ankle injury is a thing of the past, it's already out of my head. I am going to give everything this season."#UCL pic.twitter.com/ji0XxmDDkI

Ancelotti’s Real Madrid team is very much a work-in-progress. Upon his return to the Santiago Bernabeu this summer, the Italian inherited an unbalanced and lopsided squad. This was certainly the case after the departure of Sergio Ramos and Raphael Varane, Real Madrid’s first-choice defensive pairing.

Luka Modric signed a new contract to stay at Real Madrid for another season, but now, aged 35, Ancelotti can no longer count on the Croatian to play every minute of every match. Between Modric, Casemiro and Toni Kroos, Real Madrid’s central unit has grown stagnant and Ancelotti must re-energise them.

In attack, Ancelotti has more options. Benzema is the apex of Real Madrid’s frontline and has been since Cristiano Ronaldo’s exit three years ago, but the Frenchman has lacked consistent support. This is where Hazard could make a real difference this season. In Benzema and Hazard, Ancelotti has an attacking hub to build around.

This leaves one free attacking spot in Ancelotti’s 4-3-3 system. Gareth Bale was handed this place for the opening weekend fixture against Alaves, but struggled to make much of an impact. Rodrigo and Vinicius featured off the bench, but there are still imperfections to the game of both Brazilian wingers. Marco Asensio was expected to be a key figure for Real Madrid at this stage of his career, but has suffered from injuries and a lack of confidence.

For all the potential within Real Madrid’s attacking ranks, nobody has the verve of Hazard – not even Benzema. Nobody made more key passes against Alaves (three) than the Belgian. Only Modric registered more dribbles than Hazard who channelled all his energy into hurting the opposition whichever way he could.

Last season, Zinedine Zidane experimented more than once with a 3-5-2 formation. This often got the best out of the players he had at his disposal and there’s a good chance this shape would bring the best out of Benzema and Hazard, in particular. It wouldn’t be too much of a surprise to see Ancelotti replicate this system at some point this season.

Having lost Ramos and Varane, Ancelotti might not have the defensive depth to field three central defenders at the same time, although David Alaba’s arrival as a free agent from Bayern Munich could help in this regard. Alongside true defenders, Nacho Fernandez and Eder Militao, Alaba would bring some balance as the one to bring the ball out from the back.

Here comes our first viz thread of the season, made by @MHassanFootball.#RealMadridAlaves

We start with our passing network. Unsurprising that the Alaba-Modrić-Benzema-Hazard quartet saw most of the ball. pic.twitter.com/9ihEL1Fil2

With Ferland Mendy on the left and Lucas Vazquez and Dani Carvajal – when he’s fit – on the right, Real Madrid are well-stocked for attacking wing-backs to provide width. The 3-5-2 shape would also allow Ancelotti to control games through the midfield trio of Casemiro, Kroos and Modric, while Fede Valverde could be brought in to provide more mobility.

If Ancelotti can find the squad depth to establish a sound defensive and midfield basis, he would be wise to pair Benzema and Hazard together as often as he can. His game plan should be founded on creating as much space as possible for his front two in much the same way Tottenham Hotspur gear their game towards harnessing Harry Kane and Son Heung-min.

Ancelotti’s return to the Spanish capital has handed a second or even third chance to a number of Real Madrid squad members including Asensio and Bale. Hazard, however, is the player who could make the most of a second chance. Zidane pushed hardest for the signing of the Belgian in 2019, but Ancelotti might be the Los Blancos boss who finally benefits from his presence.

Hazard joined Real Madrid as one of the best in his position. He appeared destined to succeed in the Spanish capital, but the famous all-white kit of European football’s most successful club weighs heavy. With every injury and setback Hazard suffered over the last two years, his confidence was cut down that little bit more.

Now, though, Hazard is playing more like his old self. There’s a swagger to his play once more even if it is still very early in the season. The signs are positive as long as he can stay fit. With so much talk of a rebuild at Real Madrid, they might already have a central pillar of their next great team at the club.