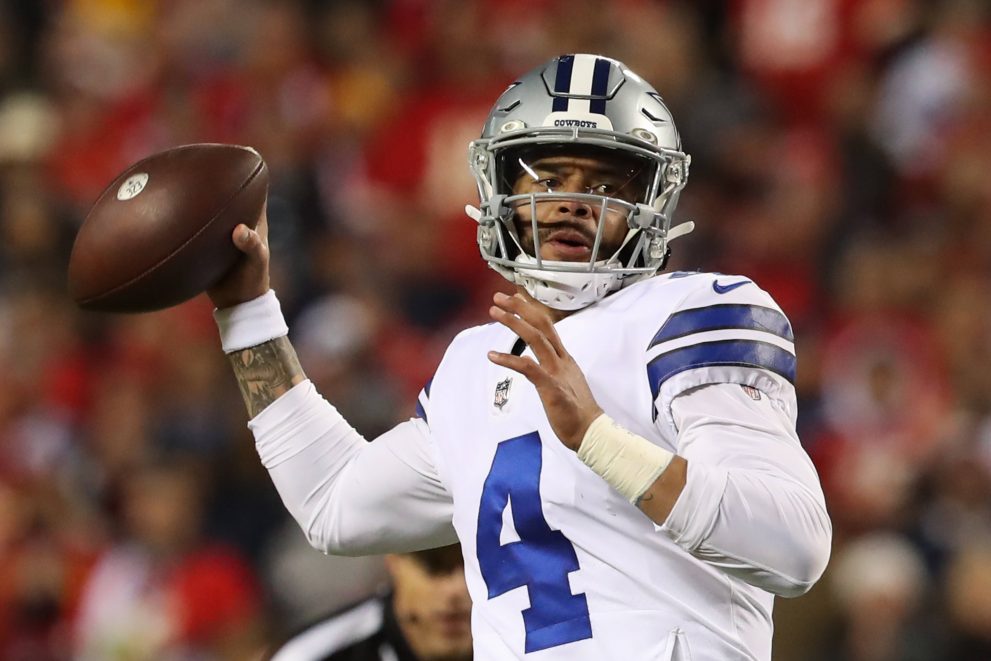 There are eight teams with Super Bowl odds of +1200 or better to win the Super Bowl. While others like the Titans, Chargers, Colts, Ravens, Browns and 49ers have been given an outside shot of claiming the title, the most likely champion will come from that elite eight.

Each team is loaded with talent and has flexed its muscle at times this season. But every one also has a weakness that others can exploit. Here is a look at the major flaw each contender must minimize to be crowned champion.

The Bills have been the highest-variance team in the league this season. One minute, they are blowing out the Chiefs on the road, the next they are losing to the lowly Jaguars. Quarterback Josh Allen has followed a similar pattern.

The runner-up for MVP last season, Allen’s numbers are down across the board in 2021 as he is having trouble piling up successive impressive performances. There is no questioning the arm talent, and Allen’s legs are a serious weapon that Buffalo can unleash at any time, but the interceptions and the mistakes are a concern.

Buffalo can beat any team in the NFL on a given Sunday, but can it string together four of those performances in a row to win it all?

The Buffalo Bills fell behind the 2005 49ers and are no longer the most inconsistent team we've ever tracked with DVOA.

On the other hand, the Panthers get less and less consistent which means the No. 2 and No. 3 all-time teams in variance will play each other next week.

As a longtime Prescott stan, it pains me to write this, but the Cowboys quarterback has had some poor games this year. Prescott is just No. 23 in ESPN’s Total QBR on the season and is averaging 7.4 yards per pass attempt, which is a full yard lower than his previous two seasons. Maybe the calf injury is to blame, but improvement is needed.

Prescott is a talented player, but we’re grading on a curve here. The other top NFC teams have Tom Brady, Aaron Rodgers, Kyler Murray and Matthew Stafford as their quarterbacks, so once the NFC Divisional Round hits, Prescott will need to be on his ‘A’ game.

There is plenty of high-end potential, and the Cowboys have a great offensive line and wide receiver corps, so the players around him will help Prescott out. But he can’t have the type of stinkers that have been too prevalent in the back half of the schedule this year.

The Rams might be the most top-heavy team in the NFL. The defense boasts three superstars in Aaron Donald, Jalen Ramsey and Von Miller. The offense has Stafford, elite wide receiver Cooper Kupp and star left tackle Andrew Whitworth.

The Rams have great players at premium positions, which should have them in the mix come playoff time. However, there is a price to pay for accumulating all of that upper-tier talent. Los Angeles traded premium draft picks to get some of them, and the salary crunch to afford such players has allowed for other key pieces to depart. It adds up to a talented team when everything is going well, but one that lacks depth and playmakers beyond the stars.

If Stafford and Donald dominate like they did in Week 14 against Arizona, there is nothing stopping the Rams from winning the Super Bowl. But Stafford has thrown three pick-sixes this season, and if he is careless with the ball in the postseason, or if Donald/Ramsey are merely human in one of the playoff games, it could be trouble.

The Cardinals are tied for the best record in the NFL at 10-3. They are top-5 in the NFL in both scoring and points allowed and have a great shot to win the NFC West. Long story short, this is a very good football team, but its fatal flaw was on full display Monday night against the Los Angeles Rams.

The Cardinals lost convincingly for the first time this season with star quarterback Kyler Murray under center. The culprit? Interior pressure and a good game plan on the edge. Rams all-world defensive tackle Aaron Donald was unbelievably dominant in the game, finishing with more pressures (14) than the entire Cardinals team (10).

Murray is one of the two most elusive quarterbacks in the NFL, alongside Lamar Jackson, and he had his share of Houdini moments. But the pressure up the gut was a problem all night, and the Rams smartly asked edge rushers Leonard Floyd and Von Miller to contain Murray in the pocket as much as try to sack him.

The Rams are a tough matchup for the Cardinals, while the Buccaneers and Cowboys have good defensive fronts as well. If Murray has time in the pocket, he is lethal either throwing in rhythm or improvising. But Los Angeles showed how to get Arizona off its game.

The Patriots have surprisingly vaulted themselves into legitimate title contention. New England has won seven straight games heading into this weekend’s matchup against the Colts and leads the NFL in point-differential.

The Patriots have an imposing combination of a great defense and a battering running game, which makes them built for playoff football — until they’re not. Passing is still king in the NFL, and while Mac Jones has been great for a rookie, he is still a young quarterback not nearly on the level of a Brady, Rodgers, Murray or Patrick Mahomes.

If the Patriots eventually face the Chiefs in the AFC Championship game, or even if they get Justin Herbert or Josh Allen in an earlier round, there is a chance the foe jumps out ahead because of their standout signal-caller. Then it would be on Jones to lead the comeback. Can he do that?

The Packers are dead last in Football Outsiders’ special teams efficiency. It’s the least important phase of the game, but once you get into the later rounds of the playoffs, every edge matters.

Chicago Bears speedster Jakeem Grant returned a punt 97 yards for a touchdown last week against Green Bay, while kicker Mason Crosby has converted on only 67.9 percent of his field goals this season.  The Packers have fumbling issues on punt returns and coverage issues when the other team gets the ball.

Green Bay quarterback Aaron Rodgers is playing at a near-MVP-level once again this season, and the team has been great despite prolonged absences for cornerback Jaire Alexander and tackle David Bakhtiari. When they return to the fold, the Packers will have grand aspirations of a Super Bowl, but a special teams malfunction at a crucial time could spell doom.

The Chiefs’ defense has turned things around in a serious way, eliminating the obvious answer from early in the season. Surprisingly, the bigger issue may be on the other side of the ball in the postseason.

Quarterback Patrick Mahomes is having the worst season of his dominant career, and it’s because teams are playing two-high safeties the majority of the time, forcing him to dink and dunk down the field. That’s not how the Chiefs built this team, as Mahomes wants chunk plays to Tyreek Hill and Travis Kelce. Mahomes has been burned often by this defensive setup, as he has thrown 12 interceptions this season, which is tied for fifth-most in the NFL.

Mahomes has to balance risk with reward in the playoffs, because an ill-timed turnover could be the difference between a win and a loss against such talented foes.

MOFO stands for middle of field open so think two deep safeties, neither is in the middle of the field.

MOFC is middle of field closed so a safety IS in the middle of the field. Think Cover 3 with a free safety and an in the box safety.

Quite honestly, this was nitpicking, because Tampa Bay has easily been the most well-balanced and dominant team this season. Even though the Chiefs have the same Super Bowl odds, Tampa looks like it should be the clear favorite.

One thing that could derail those hopes? More issues at cornerback. The team’s top quartet of Sean Murphy-Bunting, Carlton Davis, Jamel Dean and Richard Sherman has been really banged up this year, as all four have been out at various times.

The biggest issue has been the deep pass, as the Bucs have been middle of the pack at defending those, according to Football Outsiders. Tampa has Brady and an excellent offense, so it can win a high-scoring affair, but the cornerback issue could allow for an opposing quarterback to excel.

The health situation is not too bad right now, but injuries tend to linger, and Tampa Bay has dealt with a lot at the position this year. It’s something to watch when the playoffs commence.