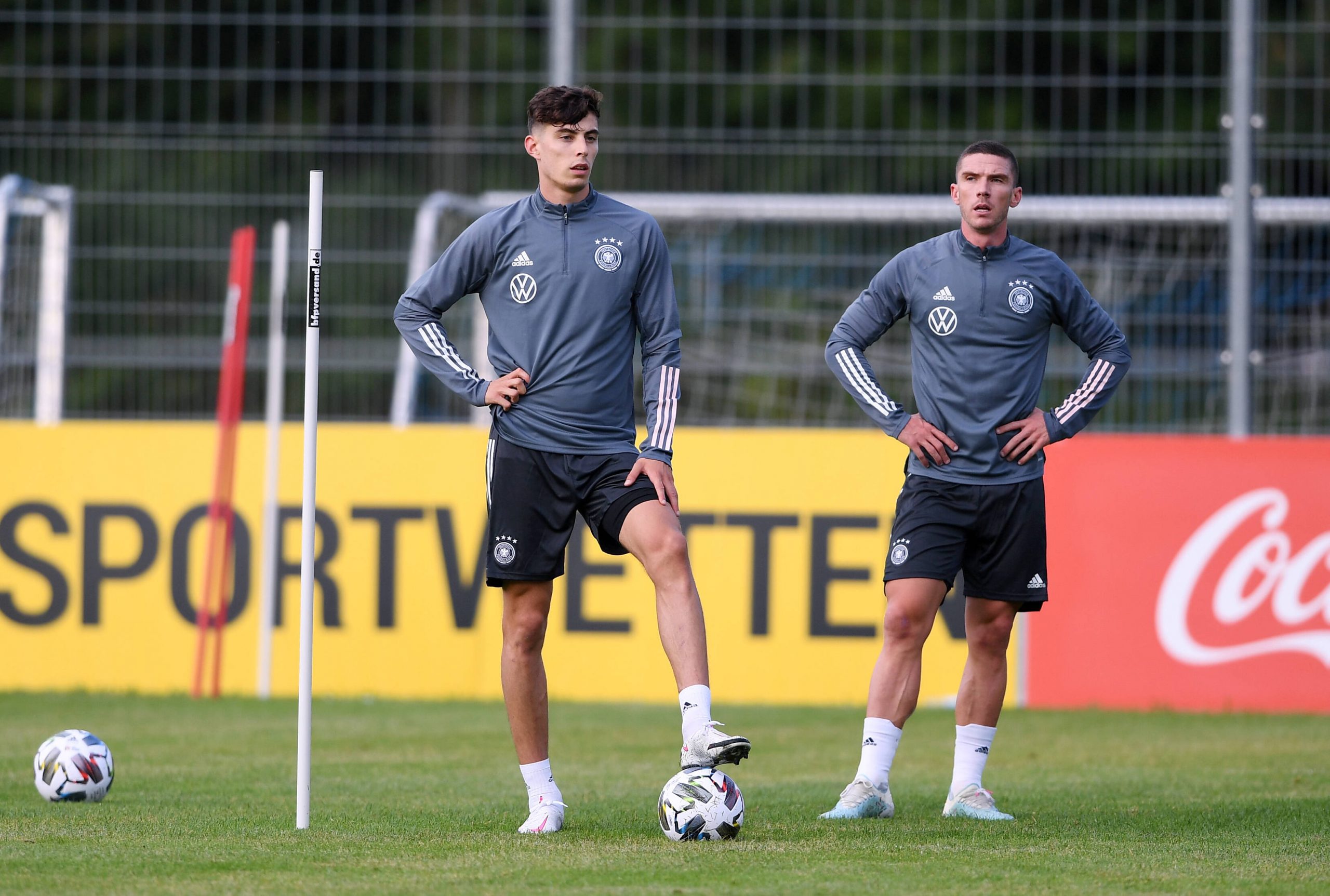 Ahead of a Champions League Round of 16 tie against Atlético Madrid in 2017, Bayer Leverkusen’s English Twitter feed shared some important team news. It was a list of players who were injured or suspended which included the name of 17-year-old Kai Havertz, who would miss the match due to an important school exam. “It really is tiring and sometimes it’s not easy mentally,” said the teenage star about his dual role.

Despite this hindrance, it speaks volumes of Havertz’s ability that, even as a school boy, he would be considered for a Champions League game against one of the best clubs in Europe. Over three years on, Havertz has left Leverkusen as Chelsea’s most expensive signing of all time, with a gleaming reputation and the backing of the club’s sporting director Rudi Völler, who believes the 21-year-old truly is something special.

“We’ve had many good players through the history of the club at Bayer Leverkusen, but Kai Havertz is the best of them all,” said Völler before the DFB Pokal final against Bayern Munich, which turned out to be one of Havertz’s last games for the club. That was a big statement considering the greats that have emerged at Die Werkself, including the likes of Michael Ballack, Bernd Schuster and Bernd Schneider.

"Kai Havertz is already world class, certainly one of the best to have ever played for Bayer 04. In the coming years, Kai will prove what a great footballer he is in the extremely demanding English league". – Rudi Völler#DankeKai pic.twitter.com/TfJcDAy5rq

Born in Aachen to a family heavily involved with football, Havertz had the game in his blood. His paternal grandfather played at an amateur level, while his maternal one, Richard Weidenhaut-Pelzer, served as president of Alemannia Mariadorf for over two decades. It was there that young Kai got his start, impressing the coaches immediately. He was so good that they signed him at the age of four, forgoing the club rules that state that they sign no players under the age of five.

At the age of 11, Havertz would move to Bayer Leverkusen via Alemannia Aachen. Academy coach Slawomir Czarniecki had actually planned to bring him to the club the previous spring – showing his family the facilities and their vision for the player, and lunch with them sold the idea.

“What we did, it was not normal,” said Czarniecki to The Telegraph. “This is not a normal story, not a normal process. It was special.” Indeed, such special players require such treatment. Since the turn of the century, German clubs have heavily focused on improving their youth sectors and Leverkusen were no different. Under the guidance of former youth coordinator Jürgen Gelsdorf, the club’s reliance on academy players had increased dramatically since the 2010s and, in the previous decade, they opened their Kurtekotten training centre for youngsters.

Soon, he was winning titles with the youth teams. The U-17 German championship was won by the club for the first time in 25 years in 2014. A 15-year-old Havertz, who had been playing with older players all his life, scored the opening goal in a 2-0 win over Borussia Dortmund in the final. That gave him the chance to play with Germany in the U-17 Euros, spurring him on to the Bayer Leverkusen first-team.

He made his debut for Leverkusen on 15th October 2016, coming on as a substitute for Charles Aránguiz and becoming the then youngest Bundesliga debutant for the club in the process at the tender age of 17 years and 126 days. The lanky midfielder was talented from a very young age, and to see him later play in the Champions League was no surprise – everyone knew he was this talented.

The four-month suspension given to Hakan Çalhanoğlu ensured Havertz got more game time in the Leverkusen first-team during the 2016/17 campaign. Over the course of the next few seasons, he began to develop into a calm and stylish midfielder. And, since the arrival of Peter Bosz in 2018, he has been the undisputed star of the show.

But what makes him so special is his versatility, with the youngster able to feature in a range of different positions, primarily in his preferred attacking midfield role and sometimes even deeper or out wide. This is a quality that has in fact been evident for some time, with Havertz long being seen as the ideal example of the renewed German philosophy of Erfolg durch Variabilität – success through versatility – which focuses on players being able to play in multiple positions and roles.

When Bosz took over as Leverkusen coach in December 2018, he implemented a three-man midfield and, alongside team-mate Julian Brandt, Havertz helped Die Werkself’s steady progression up the table as they moved from ninth in December to securing Champions League qualification in the final match of the season.

Bosz’s tactic of giving Havertz the freedom to move around the pitch couldn’t have worked better. His excellent movement created an excellent array of passing options for his fellow attacking players, while his frequent switches of position to the wing or as a false nine have meant he is incredibly difficult to mark. Off the ball he has been equally effective, dragging opposition opposition defenders out of position with so much success that it is hard not to conclude that his positional awareness is one of the best in world football right now.

But Brandt’s departure to Borussia Dortmund in the summer of 2019 meant the creative responsibility fell squarely on the shoulders of the young midfielder, who was still only 20 years old at the time. But the pressure never showed. In fact, he got actually better. In terms of chances created in the Bundesliga, only Thomas Müller’s 81 was greater than Havertz’s 57. What’s more, across all competitions in the 2019/20 season, he was responsible for 30% of Leverkusen’s goals, as his 18 goals and nine assists nearly ensured another fourth-place finish for Die Werkself.

With a top speed of 21.7 mph, Kai Havertz was the fastest midfielder in the Bundesliga last season! ⚡️ pic.twitter.com/EvMId20rKC

Havertz has been one of the Bundesliga’s best players since 2018, scoring 29 times – a record bettered only by Robert Lewandowski, Timo Werner and Wout Weghorst in that same period – and he will add a different dimension to Chelsea’s attack. So, for talent that great, his fee of £62m, which is expected to rise to £71 with add-ons, is entirely understandable. The big question now is how Frank Lampard utilises his talents. Having already signed Werner, who has never played solely as a central forward for RB Leipzig and has often struggled to do so for Germany, Lampard’s options for integrating the two in the team are fascinating.

The ex-Leverkusen man does share some traits with his current coach. “Where Havertz is quite similar to Lampard is with the ability to arrive late in the box and score,” says German football expert Raphael Honigstein. “That’s why some people in Germany have also compared him to Ballack, because Ballack also has this ability to join up with the attack, to find space on the edge of the box and score, sometimes with his head like Havertz does.”

Most importantly, though, he’s joining a young team. Last season was one of progress for Chelsea as they integrated a variety of academy players into the first team. Although their lucrative outlay this summer may reduce those chances, this is still a talented group that has many years ahead of them. The average age of their signings this summer is 26.6, with the arrival of more in the shape of a goalkeeper being likely. Nevertheless, Havertz is the centre-piece of Chelsea’s recent assault on the transfer market and, should it all go to plan, he could be the star of a group that dominates for several years yet.

Time is a great leveller and Havertz needs it. This is arguably Germany’s most talented footballer for a generation, moving countries to a club that’s in transition while he’s still only 21 years of age. The pressure is already immense. His first name will soon be replaced by his price tag in the media and he will have to do a lot to prove why he was worth it. Fans and the club need to be patient. Chelsea have an excellent footballer on their books, probably the most exciting one in the team and, in this new era for the club, in time, Havertz could become the poster boy at Stamford Bridge.

Chelsea have been busy this summer! 5 big signings, including 3 incredible attackers!

Which one will have the best season? 🤔