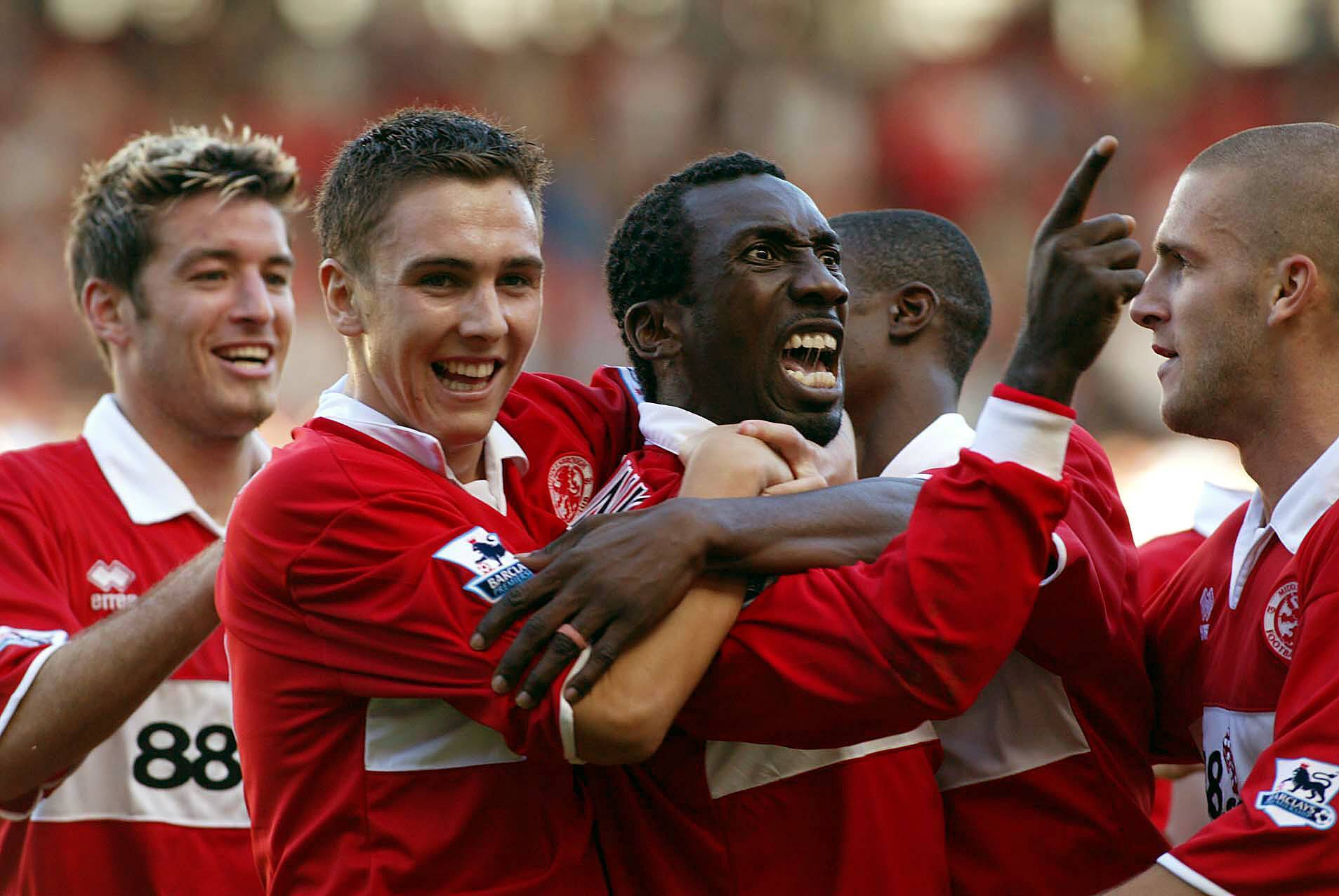 In the summer of 2009, the time had come. Stewart Downing knew he had to say goodbye.

Middlesbrough, the club he grew up supporting and who gave him his chance in professional football, had just been relegated from the Premier League. Downing was a fully-fledged England international, and he had to put that first.

“When you play for England, the managers always want you to play at the highest level,” the 36-year-old, who now plays under another Boro legend, Tony Mowbray, at Blackburn Rovers, tells Compare.bet news. “If I stayed at Middlesbrough, they weren’t going to play me. Fabio Capello told me: ‘You need to leave; you need to play at a higher level, in the Champions League or Europa League. I’ve got players in those competitions who are going to be ahead of you.’ Joe Cole was a good example.

“Then your mind starts going. You think: ‘Well, I want to play for England, that is what it’s about.’ Obviously, I loved it at Middlesbrough and I wanted to stay, but that is why I had to leave.”

There had been a considerable decline at the Riverside Stadium over the previous three years. Steve McClaren’s departure for the England job in 2006, off the back of a Carling Cup victory, FA Cup semi-final appearance and historic journey to the UEFA Cup final during his five-year reign, led to considerable budget cuts. Gareth Southgate, the club captain, took over as manager, and after a couple of steady seasons, the spiral began.

Highly-rated ever since his emergence as a teenager, Downing was a wanted man. Left-wing had been seen as a problem position for England, and his crossing ability made him an ideal option. He had to take the opportunity and had been fielding interest long before the relegation campaign, of which he missed large spells because of injury. In the end, he joined Aston Villa for £12million. 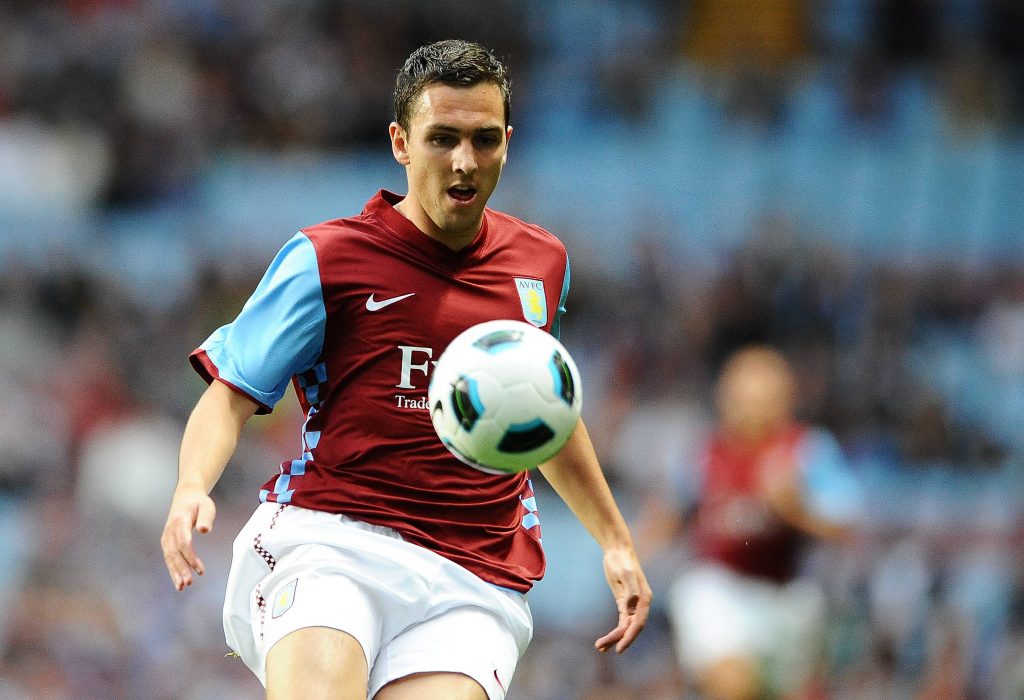 Downing in action at Villa Park

“Tottenham wanted me, Harry Redknapp really liked me, and I think Everton were interested too,” Downing says. “Phil Neville once asked me if I fancied going there when I was with England. Obviously, you talk to players about these things.

“When I got injured, I thought I was going to be at Middlesbrough another year. Tottenham went dead because they wanted players ready to go. Martin O’Neill had rung up in January and asked if I was available and Steve Gibson [Middlesbrough chairman] flat out told him I definitely wasn’t leaving in that window. We were going to speak in the summer. I’d actually got injured against Villa late on in the season.

“O’Neill calls again and says he’s still interested in me; I didn’t actually know anything about it. Gibson told me he thought that was the right move for me because Spurs were changing their manager every six months at the time. O’Neill had to twist his chairman’s arm a bit because he didn’t want to pay £12 million for someone who couldn’t play for six months, which is fair enough. I always remember he told me that he said to the chairman that he’d sell me on for double what they paid for me. At the time, I was thinking: ‘Jesus, I don’t know if I’m going to get back fit yet, never mind you selling me on!’

“But he had a way about his words; he could make people feel really confident and good about themselves. He was Brian Clough-esque in a way, a great man-manager for the players. Two years later, I went to Liverpool for double the money like he said. Whenever I see him now, he says: ‘I told you!’

“He probably didn’t believe it, but he said it to make me believe in myself.”

It all could have been very different. There was a ‘sliding doors’ moment when O’Neill, having recently left Celtic, was interviewed for the Middlesbrough job after McClaren’s exit, but turned it down. Downing admits he often thinks about what that would have been like.

“I asked him about Boro and he said he nearly joined. He spoke to the club and was interested. He likes working with young players and we had lots of good ones. But he lived quite far away and I think his wife wasn’t well at the time, so he went to Villa because it was closer to home. It would have been interesting because I think we were in a stronger position than Villa at the time, and he ended up getting them in the top five and top six regularly. It is all about timing.

“Gareth did a good job. He knew the players and the club and he was well-thought-of. Looking back, and I know I played with him as a teammate, but he did well; he was good with the lads and he was part of the reason I stayed. There were chances to leave before I did, but I liked playing for him.” 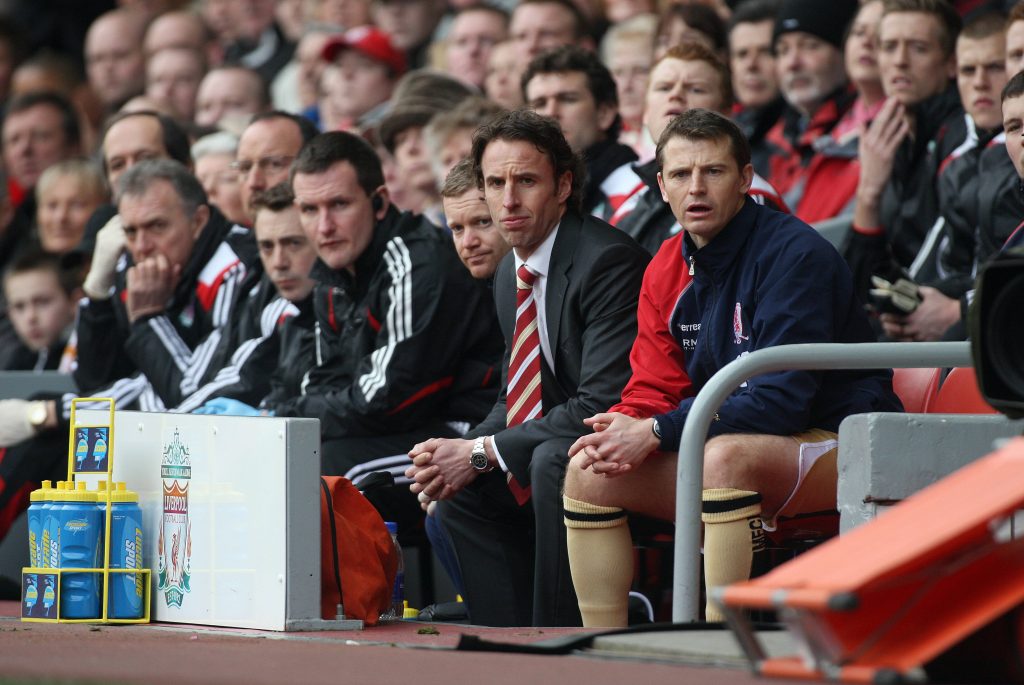 Gareth Southgate in the dugout during his spell as Middlesbrough manager

Downing left his hometown club with unfinished business, and eventually returned to the club in order to get them promoted in 2015. But after going up in his first year back, Boro only lasted a season in the top flight under Aitor Karanka. There is more fondness when he recalls his first spell, and although he admits McClaren left at the wrong time, he doesn’t believe he gets enough recognition for the job he did on Teesside, particularly getting them into Europe.

“We didn’t enjoy the success enough at the time,” he reflects. “We were so focussed and playing every three days. When I came back under Karanka, we’d worked so hard to get back into the Premier League, but it was over with a whimper. Why? Because of recruitment. That, ultimately, is why we got relegated. It is not because of quality, we certainly had that, but you have to get the right characters. With McClaren, people say: ‘He had good players, so he should have done well.’ But he has to get the players here; he has to convince them.

“I don’t think he gets the credit he deserves at Middlesbrough. Maybe the way he left hasn’t helped with that. He wasn’t ready for the England job; you obviously can’t turn it down but I just thought his time would have come again. He was quite well regarded within the FA, he’d worked with Sven [Goran-Eriksson] and other managers. I thought he could have taken another job or two in the Premier League and then gone there with more experience. He got the England job after four or five years as a manager at Middlesbrough; his first job. It’s mad, it’s unbelievable. Even Gareth [Southgate] now; usually the England manager is a 60 or 70-year-old man. He’s done well, so fair play to him.”

It was his move to Anfield in the summer of 2011 which showed Downing was finally getting recognised for his ability. That was the sort of club he’d always wanted to play for. Kenny Dalglish signed him as part of an influx of British players which also included Andy Carroll, who arrived six months earlier from Newcastle United, Jordan Henderson and Charlie Adam. 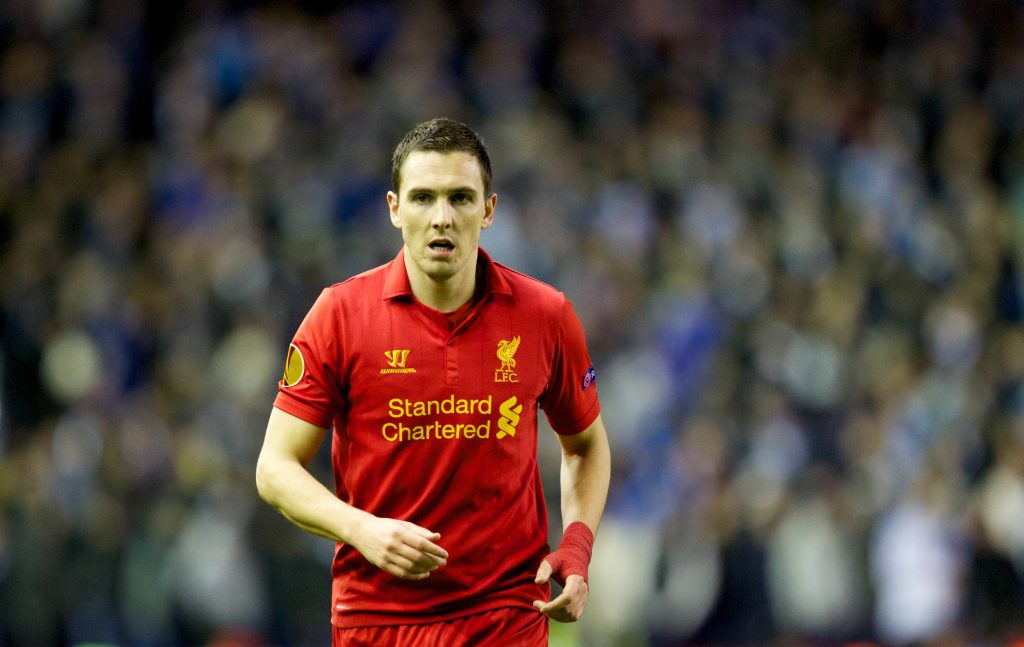 Downing playing for Liverpool in the Europa League

Dalglish was sacked a year later and replaced by Brendan Rodgers, whom Downing admits clashing with at times, but gives a lot of credit to. He says he wishes he hadn’t left Liverpool, going on to join West Ham in 2013, and isn’t surprised by the success Rodgers is now enjoying with Leicester City, who are on the brink of Champions League qualification.

“I thought Kenny would have got another year,” he says. “He’d spent a lot of money and we were a bit up and down, but we were a brand new team. We did really well in the cups, winning the Carling Cup and reaching the FA Cup final, but that team didn’t really click.

“Brendan came in and I thought he wanted his own players, which most managers do. He’d tell me he liked me as a player, but then he wouldn’t play me, then he bought Fabio Borini and other players like that. I just thought it wasn’t going to work, which I was gutted about because I’d worked so hard to make it at a club like Liverpool. Again, it’s all about timing.

“Then he warmed to me, put me in the team and, by the end of that season, he was telling me he wanted me to stay. He was trying to get rid of Jordan Henderson at that point. Did he make decisions on players too quickly? Or thought he had to change things when he didn’t? We generally got on and he told me I’d start the next season, but he’d be bringing his players in and I might have to sit on the bench.

“I had an offer to go to West Ham and play. I was all about playing, I didn’t want to just sit around and pick up money. Your career is short, you’ve got to enjoy it while you can. It hurt me to leave, I didn’t want to, and I should have probably stayed another year. I think he’d probably have put me in the team because the players he told me he was bringing in, he didn’t play. Borini went on loan and he got rid of Iago Aspas, who went back to Celta Vigo. 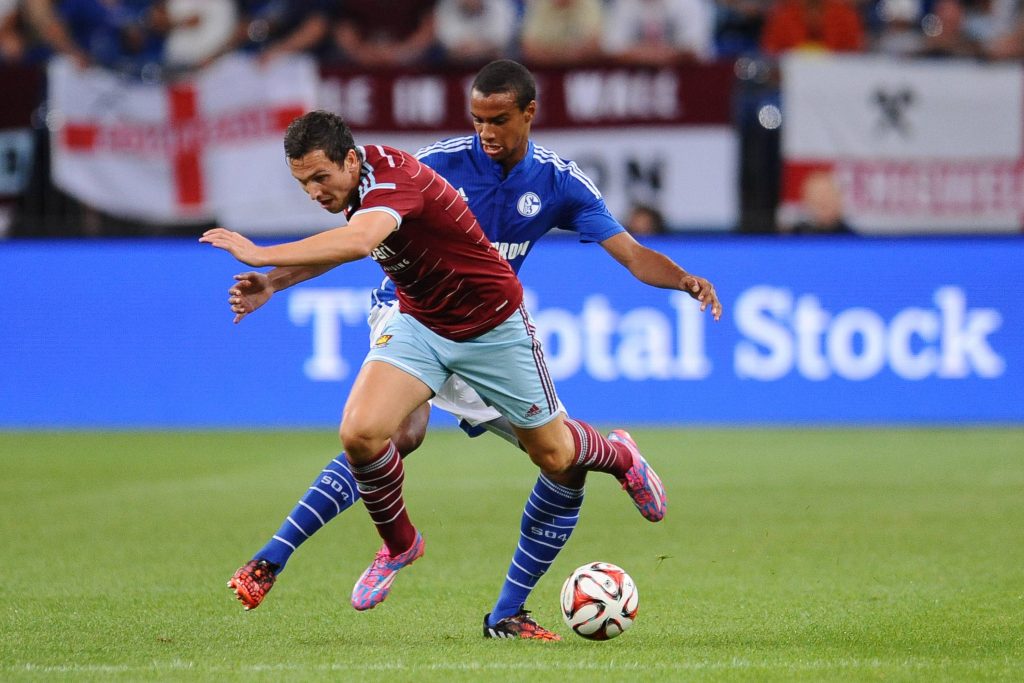 Downing in a West Ham pre-season fixture against Schalke

“I should have backed myself to play ahead of them. People look at me and Brendan and say we didn’t get on. It wasn’t like that at all; we had a tough start when he wasn’t playing me and I was getting frustrated. Then I think he worked me out as a player and I was the same with him. He was only 38, so still a young manager. Maybe he learnt a lot about how to deal with things, but you could see he was a fantastic coach. He had a good message, a good way of playing and gave a lot of belief to his players.”

Downing will always be best remembered for his time at Middlesbrough, and that suits him just fine. Leaving helped him grow, he says, and he certainly enjoyed an impressive career.

“It hurt me to leave Middlesbrough the first time,” he admits. “If we were still competing like we were under McClaren, I probably wouldn’t have left. But a change was probably good, and the club was changing. Relegation wasn’t ideal and that was why I went back really, but as a young lad, I was living at home with home comforts. I wanted to get away and be me, live on my own, just be a man and stop living round my parents and having everything given to me hand and foot. It was time to grow up.”