The popularity of video games has grown exponentially in recent years, with predictions that the industry will be worth a staggering $300bn by 2025. Competitive gaming has also picked up steam, with over 15% of internet users forecasted to stream esports in 3 years time.

But what if the phenomenon was riddled with cheating, rather than skill? With video game giants such as Call of Duty reportedly banning over 70,000 cheaters and releasing a zero-tolerance policy this year, it appears that cheating in video games has become rife.

Intrigued to find out which players and games are the greatest offenders when it comes to cheating, we sought to discover which games’ cheat codes are most sought after by analysing the number of monthly searches on Google for the top 20 leading games in both the UK and the USA.

Which Video Games Have The Most Cheats? 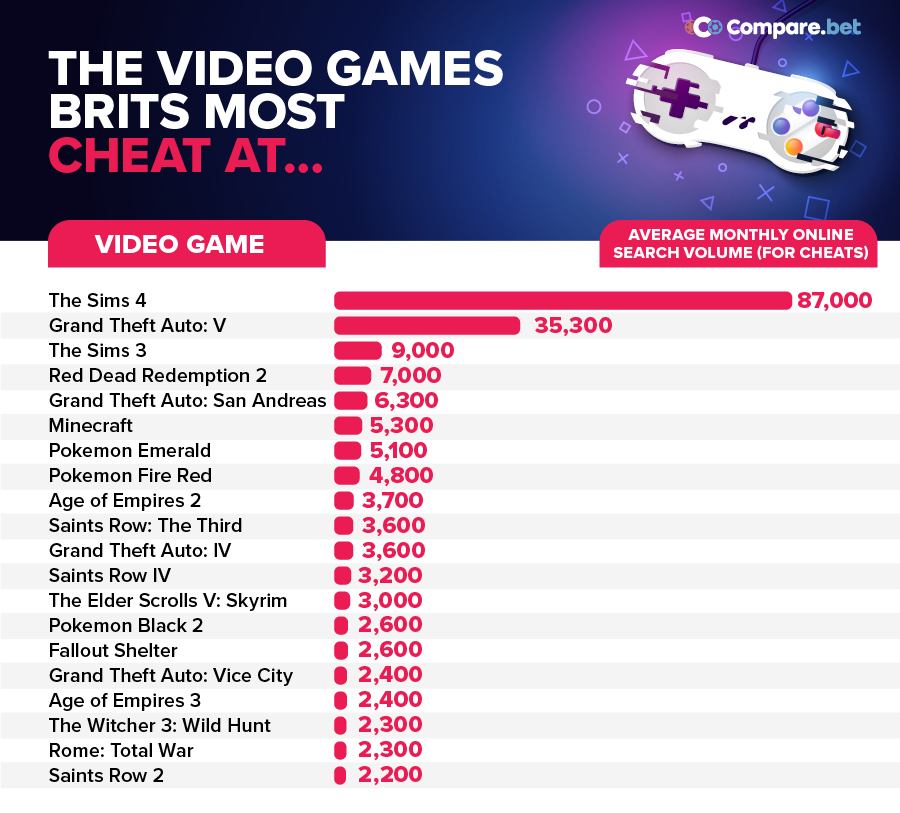 We can reveal that The Sims 4 has been crowned the video game with the most cheaters, with the largest demand for cheat codes in both the UK and the USA. With ‘The Sims 4 Cheats’ being searched for an average of 87,000 times every month in the UK alone and 404,000 times monthly in America, it appears that Sims fans are the most disingenuous gamers of all time.

However, with free money, real estate and relationship hacks all up for grabs, Sims cheats make it easy for players to craft their ideal life. So it is unsurprising that this places as the most cheated video game overall!

Second place goes to Grand Theft Auto: V, with Google receiving an average of 35,300 monthly searches for cheats in the UK and a staggering 154,000 in the USA. From free weapons to greater speed, the cheats available online for this game can quite literally render your player invincible… where’s the fun in that?

Alongside The Sims 4 in first place, The Sims franchise features once more in the top 3 with The Sims 3 coming in third spot! Searches for ‘The Sims 3 cheat codes’ garners 9,000 queries in the UK and 56,000 in the States every month! According to our calculations, this means that The Sims has a combined total of 96,000 and 460,000 searches for cheats in the UK and US, respectively. 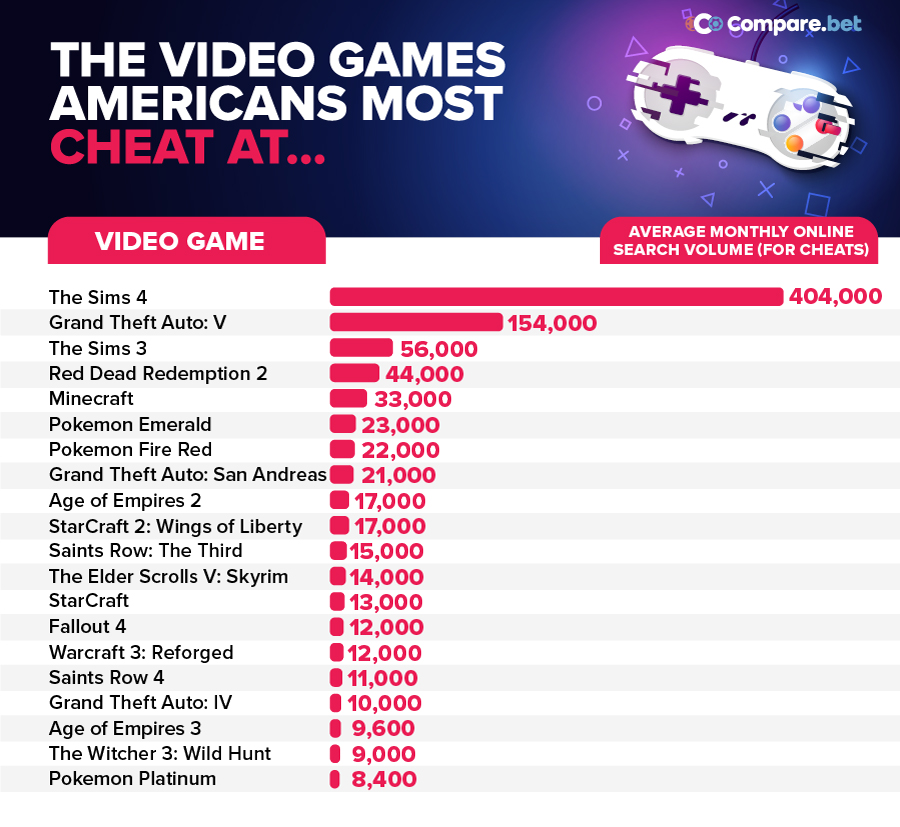 Closing the top 5 in the UK is Grand Theft Auto: San Andreas, with an average of 6,300 monthly searches for San Andreas cheats. Meanwhile, Minecraft is the video game with the fifth highest number of searches for cheat codes in the US, with a monthly average of 33,000 searches! According to our calculations, that’s 27,700 more searches than Brits make for the game, on average (5,300).

Pokemon Emerald and Pokemon Fire Red were also popular amongst cheating gamers, placing in the top 10 for both the UK and US amassing 9,900 and 45,000 searches, respectively. Age of Empires 2 was also a common game to search for cheat codes in both countries considered, with 3,700 in the UK and 17,000 in the US.

1. Compare.bet analysed thousands of gaming titles to discover the video game titles players most cheat at. To determine which game titles to include in the study, Compare.bet included the following data to ensure the list of games surveyed was comprehensive.

2. To achieve this, Compare.bet utilised Ahrefs’s search volume data tool by inputting the full title of each of the studied video games alongside the word ‘cheats’ (i.e. ‘The Sims 4 Cheats’, ‘Minecraft Cheats’ etc.). This was inserted into the analytics tools to discover on average how many times a month players search the internet to find cheats for each specific gaming title.

3. Once complete, the 20 games which had the highest search volume results were extracted and used to establish the games players most cheat at.