Election day has begun and voters across the US are counting down the hours until the polls close in one of the most important elections in US history.

This morning, several of the largest UK bookmakers cut Donald J. Trump’s odds of winning the 2020 US presidential election closing the gap between Trump and his Democratic opponent Joe Biden on election day.

Today’s odds represent a dramatic shift from Friday, where bookmakers were far less confident of Trump serving another four years as president.

On Friday William Hill and Coral, both priced a Trump victory at 13/8 while Sky Bet offered odds of 7/4.

Although Biden is still the bookies favourite to win, the gap between both candidates appears to have closed significantly overnight. At the time of writing William Hill, Unibet, Coral and PaddyPower have priced a Biden victory at 4/7, while SkyBet is offering 8/15.

To be elected president, a candidate must win at least 270 votes in the electoral college. Each state in the US has a certain number of votes based on its population and therefore 538 votes are available. This brings us to the odds for electoral college votes.

In the run-up to the election, the bookies have backed Biden almost every step of the way while Trump has trailed behind in terms of betting odds.

After the first televised US presidential debate on 30 September, Biden was the bookies’ clear favourite to win the November election with William Hill, Unibet and Coral backing Biden at 8/13.

In the first debate, which was described as “chaotic” by the general media and rightfully so as there was more bickering between Trump and Biden than any real discussion on policy or the issues facing Americans.

Based on Trump’s performance in the first debate Unibet and William Hill offered odds of 11/8 while Coral priced a Trump win at 5/4.

During this time Trump’s party was also dealing with the fallout of a New York Times article which claimed the president only paid $750 in federal income tax in 2016 and 2017 and another report from The Guardian which revealed Trump’s party sought to suppress African American voters in the 2016 election. These two events undoubtedly had an impact on Trump’s odds of winning the election.

Days after the first debate, bookmakers suspended markets on the US election after it was confirmed that Trump tested positive for coronavirus. This is also thought to have had a significant impact on Trump’s betting odds as a week before the news broke, Trump told Americans not to worry about the virus because “it affects virtually nobody.”

Trump’s recurring message had been “rounding the turn” when it came to handling the virus but this message was undermined by his own positive test.

Fast forward to the final US presidential debate in late-October and nearly every bookmaker taking bets on the US presidential election lengthened their odds on Trump winning the election.

Prior to the debate, Sky Bet priced a Trump victory in November at 11/8 while offering odds of 4/7 on a Biden victory, implying that Biden was still the favourite to win the presidency. At this point, the average implied probability of Biden winning the election grew to 64.42% (16/29) against Trump’s 40.76% (109/75) implied probability.

Bookmakers began to cut their odds of Trump winning the election part way through the debate when the topic of international relations with China came up. These odds were likely to have been influenced by the New York Times after the paper released claims that Trump still holds a bank account in China.

After the final debate, four more years of a Trump presidency was priced at 7/4 at Sky Bet, William Hill, Betfair, PaddyPower and BetVictor.

Despite all of the developments during the presidential race, it appears that the current US president has managed to slightly close the gap with his opponent.

The chart below displays the changes in each candidates’ implied probability of winning the election throughout the month of October up until election day. 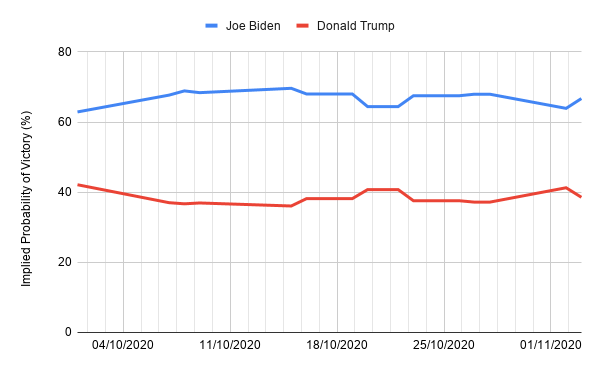 Who is leading in the polls?

However, it is important to remember that the polls only show an indication of voters’ views across the country. In the US, the election is determined by the electoral college, not by winning the popular vote. Polls only serve as an approximation of the vote.

How will America vote?

A record number of US citizens have voted early to ensure they have their say on the next US president.  Nearly 100 million Americans placed their votes in early voting in-person or via mail, which put the US on track for its highest voter turnout in a century.

Looking at the polls in states that could decide the outcome of the election, it looks as if the election could be much closer than the national polls predict. These states include Arizona, Pennsylvania, Florida, Georgia, North Carolina, Ohio, Michigan and Wisconsin.

North Carolina and Ohio were among the first states to open election day voting at 11:30GMT,  followed by Florida, Pennsylvania, Georgia, Michigan and Wisconsin half an hour later, while voting in Arizona began at 1 pm.

On Monday, the final day of campaigning, both candidates made stops in the contested states in hopes of carving out a victory. Trump made stops in North Carolina, Pennsylvania, Michigan and Wisconsin where he insisted on his economic records, chances of victory and dismissed the media.

Both candidates also made appearances in Pennsylvania, which is one of the most crucial states in the presidential race. Biden was joined by singer Lady Gaga at a rally in Pittsburgh in the Keystone State. Biden also made an appearance in Ohio where he explained to voters that this election was about the soul of America.

When will we know who wins?

It is not yet clear who will win the election and due to the sheer number of votes being placed it is possible that a winner may not even be announced today.

More often than not, an Election result is announced on the same night or in the early hours of the next morning. Back in 2016, the winner of the election was announced at 7 am in the UK after Trump secured a victory in Wisconsin.

In the last election, 25% of votes were cast by mail and this year in the run-up to the election 21% of votes cast were done by mail. Mail-in-ballots are most often used by military personnel, the elderly, those who are ill and people living abroad.

Due to the impact of the coronavirus pandemic more and more people have voted via mail-in-ballots this year. However, several US officials have raised concerns that due to the number of mail-in-ballots and the cuts to the US Postal Service’s budget, the election result could come much later than expected.