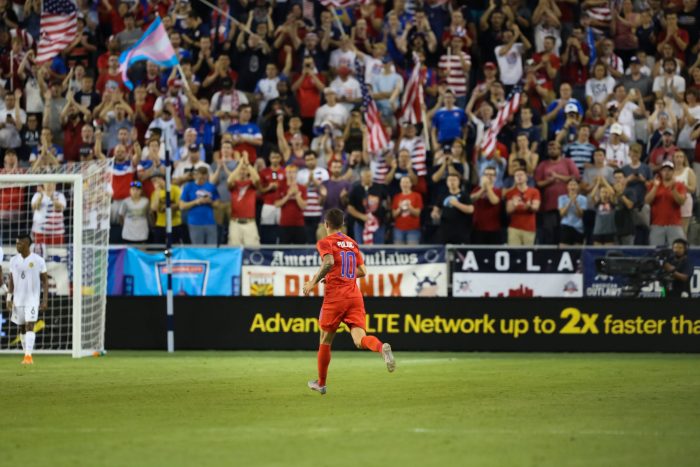 On October 10, 2017, the United States suffered the most embarrassing defeat in its footballing history. In need of a victory to guarantee automatic qualification to 2018’s FIFA World Cup in Russia, the Stars and Stripes lost 2-1 to Trinidad and Tobago at the Ato Boldon Stadium in Couva. As a result, they missed out on qualifying to the World Cup for the first time in 32 years.

Their neighbours to the north fared even worse. Canada’s dream of advancing to Russia ended on 6th September 2016 after they finished third in their seminal CONCACAF qualifying group behind Mexico and Honduras. Not only had Canada failed to qualify to a World Cup for the eighth consecutive tournament, but they had failed to reach the Hexagonal – the final round of qualification that pits the two highest-ranking teams in each of the three CONCACAF groups against each other in a round robin tournament – for the fifth consecutive time.

The United States and Canada boast the highest and 10th highest GDPs in the world, respectively, as well as the 4th highest and 2nd highest landmasses in the world. But when it comes to football, they are minnows, and their failure to qualify to the World Cup was a mere confirmation of a problem that had been swept under the rug for too long. Apart from struggling to compete against the likes of Honduras and Trinidad and Tobago, Canada and the United States were struggling to generate players who could lead them to silverware, thrive in European football and inspire future generations to take up the sport.

Devastated. But we are forever grateful to our supporters. We will persevere. pic.twitter.com/9ATsjtE7o7

Amongst Canada’s 2017 Gold Cup squad, only one player – Burnley’s Scott Arfield – was plying his trade in a major European league. Out of the men who bore witness to the USA’s ignominious loss in Couva, only three players – Borussia Dortmund’s Christian Pulisic, Newcastle United’s DeAndre Yedlin, and Hamburg’s Bobby Wood – were playing in one of Europe’s top five leagues. The defeat to Trinidad and Tobago symbolised an even larger problem: a lost generation.

As Brian Sciaretta makes clear in his article from 2017, the United States suffered a development gap from players born between 1990 and 1994, as well as 1996. In contrast to previous years, this generation was riddled with players who either failed to live up to their potential or never had much potential to begin with, such as Joe Corona, Juan Agudelo and Perry Kitchen. But just why has there been such a dearth of talent in both Canada and the United States up until now?

For one, soccer has been overshadowed in popularity by other sports – ice hockey and lacrosse in Canada, American football, basketball and baseball in the States – meaning that many youngsters choose to take up other sports instead. There have been world class superstars on the women’s side, such as Christine Sinclair, Megan Rapinoe and Abby Wambach, but on the men’s side they’ve come up short time and time again.

Both Canada and the United States struggle from a lack of top quality coaching that often forms athletes rather than footballers. There are elite level academies, but they’re often conglomerated in affluent neighbourhoods and far too expensive for the average family. Nevertheless, there are still signs of hope, signs of players and coaches working around a rigged system.

One such case is Alphonso Davies, whose success arose from the work of non-profit organisations created to provide opportunities to low-income children. After moving to Edmonton, Alberta, Davies’s talent was noticed by Melissa Guzzo, who worked as his sports coach at Mother Theresa Catholic School. Guzzo reached out to Tim Adams, the founder of Free Footie, a nearby after-school league for inner city kids who could neither afford registration fees nor equipment nor transportation to games. From then on, Davies rose up Canada’s footballing pyramid, before joining MLS side Vancouver Whitecaps’s academy.

In Christian Pulisic’s case, the answer came from an outsourced footballing education. Pulisic began his footballing career in Brackley, England at the age of 7, but he moved back to the States, bouncing from Michigan to Pennsylvania before joining Borussia Dortmund’s academy at the age of 16. More families are following Pulisic’s example in moving abroad to kick start their children’s footballing careers, specifically Germany. Giovanni Reyna joined Dortmund’s academy at 16, Chris Richards left FC Dallas for Bayern Munich at 18, whilst Joseph Scally will leave New York City FC’s academy and join Borussia Mönchengladbach on his 18th birthday next year.

The 20-year-old is a great talent ???? pic.twitter.com/LgpY6NRyQN

So rapid has the rise been for the exciting young winger, that the one glimmer of hope from that dark night in Couva was Pulisic himself. Trailing 2-0 to Trinidad and Tobago, the then-19 year old Pulisic collected the ball from 30 yards out, took a touch past Levi Garcia and fired a rocket of a shot from the edge of the box into the top left corner. On a night when those of his teammates 5-10 years his senior looked like amateurs, Pulisic was the only one who looked capable of shining on the international stage.

But what has got North American football fans excited more than anything else came a day before the World Cup kicked off in Moscow. On 13th June 2018 it was announced that the United States, Canada and Mexico had won the rights to host the 2026 FIFA World Cup. When presenting FIFA with their “United As One” joint bid, the presidents of the American, Mexican and Canadian football federations were accompanied by three of their most promising footballers: 18-year-old Brianna Pinto, 18-year-old Diego Lainez, and a 17-year-old Davies.

When speaking to the FIFA Congress in Moscow, Davies explained how much it had meant to him for Canada to grant him citizenship two years prior. “My parents are from Liberia and fled the civil war. I was born in Ghana in a refugee camp. It was a hard life. But when I was five years old, a country called Canada welcomed us in, and the boys on the football team made me feel at home…my dream is to someday compete in the World Cup, maybe even in my hometown of Edmonton.”

While the United States will host 60 of the tournament’s 70 matches in 2026, Mexico and Canada will split hosting responsibilities for the other 10 and, along with Montreal and Toronto, Edmonton is under consideration as a possible site for group stage matches. Another one of the potential venues is in Baltimore, a 90-minute drive from Pulisic’s hometown of Hershey, Pa.

BREAKING: The 2026 @FIFAWorldCup will be hosted in the USA, Mexico and Canada. pic.twitter.com/j34uyFE56U

Both Pulisic and Davies have always seemed destined to be the trailblazers and torchbearers for the next generation of Canadian and American footballers. Pulisic joined Borussia Dortmund as a 16-year-old, developing with the U-17 and U-19 teams before making his Bundesliga debut on January 30, 2016, coming on as a substitute against FC Ingolstadt. Bit by bit, he cemented his first team status under Thomas Tuchel’s tutelage, impressing alongside the likes of Julian Weigl and Ousmane Dembélé. While he mostly played on the wing, his technique, work rate and close control also meant he could play in central midfield.

His good form continued into the next season under Tuchel’s replacement, Peter Bosz. But the arrival of Peter Stöger and later Lucien Favre limited his game time. Nonetheless, that didn’t stop Chelsea from splurging £57.6 million on Pulisic in January, making him the most expensive American footballer of all time.

Pulisic had an uncertain start to life under Frank Lampard. He set up Olivier Giroud’s opening goal in the UEFA Super Cup Final in Istanbul and played a starring role in Chelsea’s 1-0 away win against Ajax, but suffered an abductor tear in January leaving him out of the team for five months.

But on his return against Aston Villa on 21st June, he began to show why he really could fill the Eden Hazard sized hole at Chelsea. In need of an equaliser following Kortney Hause’s opener, Pulisic tip-toed his way from the edge of the box to the near post, slamming César Azpilicueta’s cross into the back of the net with a well-struck volley. Chelsea went on to win, taking an invaluable three points in their race for top four.

Four days later, he once again found the back of the net, this time against Manchester City. Capitalising on a miscommunication between Īlkay Gündogan and Benjamin Mendy, Pulisic picked up a loose ball and dribbled half the length of the pitch before coolly slotting it past Ederson.

Alongside Manchester United’s Bruno Fernandes, Pulisic was the Premier League’s star performer throughout ‘Project Restart.’ His performances have lit up Europe in a manner unprecedented for American players, playing in a way not matched by even the greatest of US football legends like Clint Dempsey or Landon Donovan. He is validating both the hype and the price tag and proving why he deserves to be considered amongst the best wingers in European football.

Davies’s story is similarly meteoric, but it also didn’t come without a few bumps along the way. A month after speaking to the FIFA Congress in Moscow in 2018, Davies joined Bayern Munich for €11.5 million. But in the whole of the 2018/19 season, he only made four substitute appearances. He didn’t fare much better under manager Niko Kovač at the start of this season, having to pay a €20,000 fine for arriving for practice after flying to Paris to meet his girlfriend, Canadian football superstar Jordyn Huitema.

But after being grounded for his first nine months abroad, his career in Bavaria finally took off following injuries to Niklas Süle and Lucas Hernandez, leaving Kovač with no choice but to test Davies in the unnatural position of left back. Despite breaking onto the scene as a winger for Vancouver and Canada, Davies showcased a remarkable sense of maturity and awareness on the left side of defence.

He has gone on to thrive in that position under new manager Hansi-Dieter Flick, keeping the club record signing Hernandez out of the starting line-up and delivering a run of performances rivalled by few left backs in world football. Davies’s introduction in the line-up coincided with Bayern’s turnaround in form. The Canadian built a menacing partnership down the left with Serge Gnabry, remaining composed in attack and sweeping up danger in defence, playing a fundamental role as Bayern went on to win yet another domestic double. He’ll have a chance to add to his trophy haul next month, when Bayern compete in the UEFA Champions League in Lisbon.

Like Pulisic, Davies is performing at a level never before witnessed by a Canadian footballer. Whilst the likes of Junior Hoilett, Atiba Hutchinson and Paul Stalteri have achieved relative success in Europe, none have ever managed to be considered amongst the best in their respective positions. For the first time ever American and Canadian fans have two youngsters who are going blow for blow with the best sides in Europe and who are fast establishing themselves as two of the strongest prospects in world football.

Elsewhere in Europe, 20-year-old Canadian forward Jonathan David has thrived at Gent, scoring 23 goals in all competitions and finishing the season as the top scorer in the Belgian First Division. Lille are rumoured to have submitted a €25 million bid for him and, with Loïc Rémy joining Benevento and Victor Osimhen set for a big-money move, it seems ever more likely that David will join up with his compatriot Charles-Andreas Brym at the Stade Pierre-Mauroy.

To the west, USMNT right back Sergiño Dest has won a starting spot at Ajax, whilst the likes of Tyler Adams, Weston McKennie and Giovanni Reyna have showcased their enormous potential in Germany this season. By the time the 2026 World Cup rolls around, most of these players will be either entering their prime or enjoying their prime years – Reyna, 23, Davies, 25, David, 26, and Pulisic, 27. If they can reach their ceiling, Canada and the U.S. won’t just be participating in 2026, but competing as well.