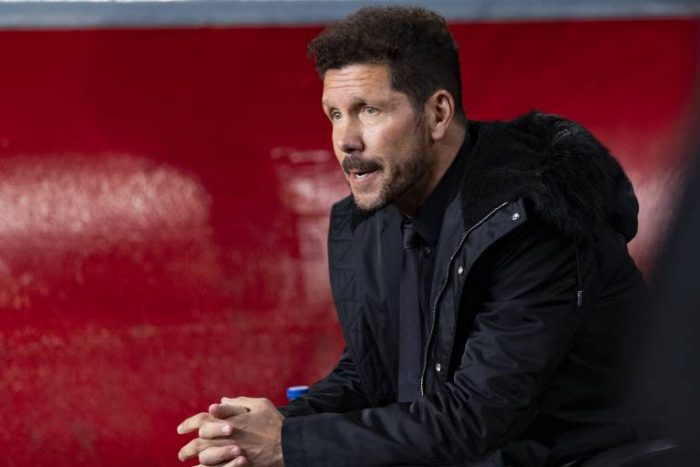 On Tuesday evening, Atletico Madrid welcomed Bayer Leverkusen to the Wanda Metropolitano for their third Champions League group game of this season. The Germans arrived having failed to pick up a single point from their first two ties, suffering a 2-1 defeat at home to Lokomotiv Moscow as well as a 3-0 defeat away to Juventus, a game in which they failed to register a shot on target.

Atletico Madrid lined up with a midfield four of Koke, Saul, Hector Herrera and Thomas Partey. That’s four combative midfielders who, while talented, are far from being the most attack-minded. With Diego Costa and Angel Correa up front, there was not a natural wide player in sight. Bar Correa, the team lacked pace and guile going forward.

The game played out as you might have expected. There were three shots on target in total, two from Atletico and one from Leverkusen. The Germans dominated possession, having the ball 60% of the time and making 200 more passes than the Madrid side. Atletico eventually won the game, courtesy of a goal from substitute Alvaro Morata, but it certainly wasn’t pretty.

In fact, there has been very little that’s pretty about Atletico since Simeone took over. His team became one of the most feared in Europe due to what was often an impenetrable defence. Simeone’s side became famous not for their attacking play, but a defensive, counter pressing philosophy which often stifled the best attacks on the planet. They were masters of their craft, boasting an honours list that includes two Champions League runners up medals, a La Liga trophy and two Europa League trophies.

Simeone rejuvenated a club that found itself in Spain’s second division as recently as the 2001-02 season and last won La Liga back in 1996. Simeone, who, as a player, was largely considered as the emotional heartbeat of that title-winning side, reinstilled some of the traits that the class of ‘96 were known for. A solid defence, physical and mental toughness as well as a rigid formation that features two up top.

This recipe struck gold, as Simeone’s men ended the drought by winning La Liga in just Simeone’s third season. In the years since, Atletico have failed to reach the summit once more, finishing second or third each season. After eight years at the helm, there are now concerns that Simeone has taken the club as far as he can. Which begs the question, is Atletico’s greatest ever manager the right man to lead the club into a new era?

This summer was one of huge overhaul at the Wanda Metropolitano. Stalwarts Diego Godin, Filipe Luis and Juanfran all departed on free transfers, players who epitomised Simeone’s values. All three were integral parts of one of the meanest defences European football has ever seen, leaving a gaping whole of experience at the back. However, while these players were all 33 or older and perhaps at the right time to move on, it was the other departures that has really hurt the club.

Simeone has already said that Lucas Hernandez was the club’s biggest loss this summer. The Atletico academy graduate and World Cup winner left for Bayern for €80m after the Germans triggered his release clause. The departure of one of Europe’s best and most versatile young defenders was the last thing Simeone needed. Rodri’s departure to Manchester City after just a single impressive season only added salt to the wounds.

Then there’s the controversial transfer of Antoine Griezmann to Barcelona, just a year after he infamously declared his loyalty to Atletico. While some Atletico fans may have been glad to see the back of the flamboyant Frenchman and his antics, the loss of one of the world’s top attacking talents is obviously a huge blow.

Griezmann may not fit the typical Atletico image in the way Diego Costa does, but during his time in the capital he developed from a slight winger into the archetypal Simeone striker. Always willing to sacrifice attacking flair for the sake of the team and yet a prolific scorer of crucial goals, his departure left a big hole in the team.

Fair to say Atletico had a job on their hands to replace their outgoing players, and the club spent big over the summer. Felipe and Hector Herrera joined from Porto, while Marcos Llorente and Mario Hermoso joined for €40m and €25m respectively. Kieran Trippier was also signed to replace Juanfran, while young Brazilian Renan Lodi joined for €20m to replace his compatriot Luis.

The marquee signing, however, was that of 19-year-old Joao Felix from Benfica. Atletico spent an incredible €126m to bring the Portuguese in as Griezmann’s replacement after the teenager impressed with 20 goals and 11 assists last season. It was a major coup for Atletico, considering Felix was linked with most of Europe’s biggest clubs. The move eased the dark cloud swirling around the club following the summer’s mass exodus.

There was plenty of excitement surrounding this new-look Atletico side at the start of the season, particularly following a preseason 7-3 demolition of city rivals Real Madrid. However, the performances over the opening months have certainly dampened expectations.

Atletico currently sit fifth in La Liga, having won just four of their opening nine games, drawing four and losing one. Those results include a 2-0 loss away to Real Sociedad, a 1-1 home draw against Celta Vigo, and a 0-0 away draw to Real Madrid. Even in wins, Atletico have rarely impressed. They just managed to scrape by Leganes and Getafe 1-0, and conceded two goals at home to Eibar, winning 3-2 thanks to a last minute goal from Thomas Partey.

While they’ve still only conceded five goals in nine games, their general play hasn’t been impressive, particularly going forward. The attacking play is often slow and ponderous, with Simeone preferring industrious midfielders and not seeming to trust his more attacking charges. More worryingly, however, is that Atletico are continuing their trend from the last few seasons of not picking up enough points to justify their defensive style.

Diego Costa has continued his struggles from last season, while wingers Thomas Lemar and Vitolo are still yet to cement their place in the starting XI. Joao Felix has shown flashes of his talent, but hasn’t been a like-for-like replacement for Griezmann in terms of productivity. Of course, it was always unlikely that a newly-constructed team would hit the ground running, but fans are still severely underwhelmed after the money spent in the transfer window.

The particularly disappointing factor for Atletico fans is that the club’s own struggles mean they’ve been unable to capitalise on earlier stutters from Real and Barca. When competing with what are probably the two strongest football clubs in the world, Simeone’s side need to take advantage of any slip ups if they are to have realistic hopes for another La Liga title.

Danger of staying too long

Simeone’s achievements mean he’s a bona fide legend at the club and will likely never be sacked barring an extreme nosedive in form. However, as the past has so often shown, even the very best managers have an expiry date.

We’ve seen it from Jurgen Klopp, who, like Simeone, awakened a sleeping giant in Borussia Dortmund, taking them to the league title and Champions League final. However, after seven years, his final season was a fairly torrid one, as Dortmund finished seventh in the Bundesliga.

We’ve seen it from Arsene Wenger, whose 22-year reign at Arsenal saw the club go from the feared Invincibles to perennial underachievers. It’s still early days, but we may also be seeing the beginning of a similar pattern for Tottenham boss Mauricio Pochettino.

Of course, there are mitigating circumstances in each of these cases, and the blame can’t be placed solely on the managers. Dortmund and Arsenal lost many of their best players, while Spurs have suffered from a lack of investment into the team. However, the worrying thing for Atletico fans and Simeone is that los Rojiblancos are not a club free of these issues, as seen by the losses of Griezmann, Hernandez and Rodri just this summer.

Griezmann is a particularly interesting example, having turned down Barca to stay at Atletico only to go back on that decision a year later. In 2017, Griezmann said the following to L’Equipe:

“We finished third in La Liga. It was the club’s objective but the players want more. I want to win trophies. I’ve come to a point where I play really well and score goals but it’s not enough […] I reached a final and a semi-final of the Champions League with Atletico. We’re close but we’re missing something.”

For a side like Atletico, one without the prestige or grandeur of its cross-city rivals, consistently competing for top honours is key to keeping the biggest talents. Griezmann committed after a Europa League winning season, and left after finishing the next campaign trophyless. With constant rumours surround the futures of players like Jan Oblak and Saul, how long will Atleti be able to keep hold of these names if they don’t return to the winning ways of several seasons ago?

If Joao Felix develops as expected, can Atleti realistically expect to keep him beyond the next three or four seasons? Forwards in the mould of Griezmann and Felix will always be tempted by the bright lights and attacking philosophies of teams like Madrid and Barca if Atleti’s defensive style doesn’t result in hardware.

No longer the right fit?

Atleti’s on-field strategy has not changed in the way the shift in transfer policy suggested it would. There has been talk of a switch to a more expansive style for a while now, but any kind of change is yet to materialise.

The wide areas have been a particular problem for Simeone over the years. Thomas Lemar was signed for £63m, but the Frenchman has thus far failed to truly shine in Madrid. Gelson Martins, Vitolo and Nicolas Gaitan are other wingers signed for big money in recent seasons that have had minimal impact on the team.

When Simeone arrived, he took over a team that had finished seventh the previous season under the more progressive style of Quique Sanchez Flores. Within three years, he had broken Barca and Real’s La Liga dominance and was a minute away from winning the Champions League.

Since then, Atletico have positioned themselves as one of Europe’s big guns. The club has moved into a newly constructed stadium that is one of the continent’s finest and spent hundreds of millions on attacking players over the last few seasons. However, they have won just two trophies in the last five years, the Europa League and the UEFA Super Cup.

Simeone is a manager glued to his philosophy, and it’s a philosophy suited to the underdog. It’s a philosophy designed to allow less technically gifted players to compete with the best by making a whole more than the sum of its parts. It’s a philosophy weighed in blood and sweat rather than attacking prowess and creativity. In many ways, then, it’s only natural that this system may no longer be best suited to a club than has risen from mediocrity to the upper echelons of European football.

Of course, Atletico are still a competitive team, finishing runners up in La Liga last season. However, they never truly looked like threatening Barca’s lead, and they threw away a 2-0 first leg lead to Juventus in the Champions League round of 16, a collapse that was unimaginable back when they were in their pomp. For a while now, it just hasn’t felt like the same ruthless Atletico that first made such a big impression in Simeone’s first few seasons.

Like Wenger and Klopp, Simeone will decide when he goes. However, the question has to be asked if he is still the best man for where Atletico want to go next. The club’s aim has shifted from joining Europe’s elite to remaining part of it, and it may be time to embark on a new chapter if the next stage of the transition is to be realised.