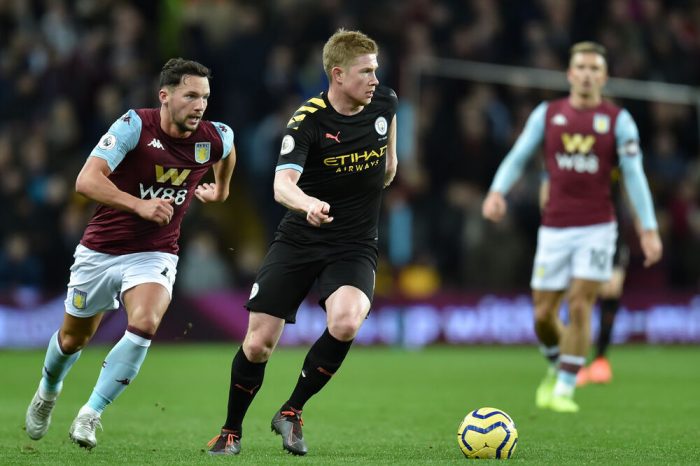 Appearing in the League Cup final for the fourth time in five years, Manchester City have developed a newfound reputation for being kings of the Carabao. The League cup predictions many are making for this final are quite lopsided, but we’ve seen bigger upsets in the past. Manchester City themselves suffered a shocking defeat to Wigan Athletic in this fixture in 2013 – can their opponents Aston Villa pull off a similar feat?

The road to Wembley

The Villans opened their League Cup campaign by dispatching of League Two title contenders Crewe Alexandra in a 6-1 win. They followed this up with back to back wins over youthful Brighton and Wolves teams, before beating a weakened Liverpool side in the quarter-finals. Their two-legged semi-final win over Leicester saw Egyptian winger Trezeguet score in the final minute to earn himself a place in Villa folklore for years to come.

The lads spent a little bit of time in front of the cameras as preparations for the #CarabaoCup Final continue… ?#AVFC pic.twitter.com/gdHLda9lTf

Manchester City’s run saw them play weakened teams up until the quarter-finals, an approach which has resulted in success in their previous two Carabao Cup-winning campaigns under Pep Guardiola. They began with wins over Preston and Southampton in which the likes of youngsters Tommy Doyle and Eric Garcia featured in the starting XI. They followed this with a win over Oxford United in the quarter-finals, and a two-legged victory over Manchester United in the semi-finals which was essentially wrapped up during a 30-minute flurry of goals in the first leg at Old Trafford.

With City’s pursuit of the Premier League title all but over and Aston Villa fighting relegation, the League Cup final is an all-important opportunity for both teams to put some silver lining on otherwise dreary seasons.  With the league’s worst defence and best attack facing off, one thing we can expect is goals.

On Sunday, it's the highest scorers v the holders.

1. Second half to be the highest-scoring

Given what happened to Villa last time they played Manchester City in a 6-1 defeat, Dean Smith may choose to set Aston Villa up to be a little bit more compact, as they tried to press City at Villa Park and were expectedly ripped apart. While this may result in a low scoring first half, we’re certain City possess more than enough quality to break down Villa’s defence eventually – they rank last in goals conceded (52), clean sheets (4), set-piece goals conceded (15), shots faced per game (18.2) and xGa per game (2.11). Of the 52 goals conceded, 19 of those have come at the 70th-minute mark or later.

While Manchester City have well and truly been ousted from their throne by runaway league leader Liverpool, they have maintained their spot as the league’s most free-scoring team. Pair this with Aston Villa’s struggle for any kind of control in their games against bigger sides (they’ve conceded 28 goals in nine fixtures against Spurs, Man City, Leicester, Chelsea, Manchester United, Liverpool and Arsenal) and BTTS No and over 2.5 goals makes a lot of sense.

Manchester City games have yielded over 2.5 goals on 74% of occasions. Aston Villa are slightly lower at 70%, but both still have seen a gluttony of goals in their games. Aston Villa struggled in their last game against Southampton, managing just four shots despite having more of the ball than the Saints. Their only goal against Manchester City this year was from a penalty late in the game, with Villa generally not having the pace to get at a City defence which does struggle against pacey and direct players. It is for this reason that it does appear to be an uphill battle for Aston Villa to find the back of the net in this game.

Aymeric Laporte’s injury in Madrid does somewhat hurt a clean sheet for Manchester City, but they still have a great chance. They haven’t conceded a goal in the previous three cup finals under Pep Guardiola. Laporte’s absence is big, but as long as Fernandinho plays then City should be fine. The real nationally televised defensive struggles have come with John Stones and Nicolas Otamendi playing together. Fernandinho’s City appearances in the League have seen City concede around one goal per game. City have only conceded one goal against teams currently in the bottom six whilst Fernandinho is starting, with the bigger struggles coming against fellow top half sides. Fernandinho should be a lock to start due to Laporte’s injury and John Stones’ poor form of late.

Odds and statistics correct as of 26th February 2020. Data sourced from footystats.org and whoscored.com