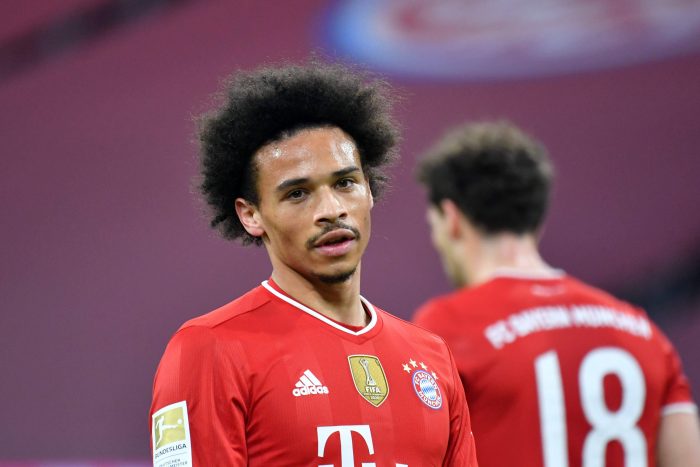 Pep Guardiola doesn’t always say what he really means. During his spell as Bayern Munich manager, he claimed he wanted “1,000 Dantes” just a matter of weeks before the Brazilian defender was sold. So when Guardiola gushed about Leroy Sané, a player he’d reportedly questioned the attitude of, as he left Manchester City last summer, some scepticism was necessary.

Never an easy man to please, Guardiola dropped Sané for a match against Newcastle United in August 2018 after the winger reportedly allowed his training levels to dip. This came after German national team manager Joachim Low omitted Sané from his 23-man squad for the 2018 World Cup, a decision widely believed to have been made on more than just footballing factors.

He had a brilliant season with Man City, but Leroy Sane isn't going to the World Cup.

A £55 million move to Bayern Munich was Sané’s opportunity to prove his doubters, namely Guardiola and Low, wrong. The Bavarian club chased the winger for over a year and returned for him after an anterior cruciate ligament injury scuppered their first attempt to strike a deal with Manchester City in 2019. Such faith suggested they knew how to get the best out of Sané.

So far, Sané’s performances for Bayern Munich this season have only underlined why Guardiola was right to have misgivings about him. It’s too early to write off the 25-year-old as a flop at the Allianz Arena – there have been glimpses of his brilliance – but many of the problems that surfaced at City have been accentuated further in Bavaria.
Competition at City for wide forwards was stiff, but Sané offered something different. Phil Foden, Riyad Mahrez, Bernardo Silva and Raheem Sterling are all capable in wide areas. Their tendency, however, is to cut inside. Sané, as a left-footer primarily used on the left-wing, was a more direct option.

Leroy Sane back in his Man City days💫

He certainly put the burners on at the 2018 ICC against Liverpool 😳 pic.twitter.com/4EMgK7bjq3

However, Guardiola seemingly was unable to find the full-back partner for Sané. The German only started alongside Benjamin Mendy on the left side five times over three seasons. At Bayern Munich, Sané has been most commonly used on the right wing, but he has countered a similar problem. Hansi Flick has used Benjamin Pavard, Joshua Kimmich and even Niklas Süle as his right-sided full-back this season, denying Sané the chance to establish a relationship with any of them.

One might suggest Flick should therefore use Sané on the left, where he was most effective for City, but on the odd occasion he has ended up there, Alphonso Davies has made many of the same runs. The Canadian provides Bayern Munich with drive down the left. He needs a wide partner whose first instinct is to cut inside and that isn’t Sané. At present, Davies is more important to Bayern Munich than Sané.

Finding Sané the right full-back partner would improve his chances of integration. This, however, might require Bayern Munich to go against the zeitgeist of the modern game. Most elite-level clubs favour attacking full-backs, but Sané might work better alongside someone like Aaron Wan-Bissaka, who would mask many of his defensive vulnerabilities.
Sané’s defensive contribution was frequently scrutinised during his time as a City player. This is an area he has failed to improve in as a Bayern Munich player, making fewer tackles and interceptions than the club’s other wide forwards – Kingsley Coman, Serge Gnabry and Jamal Musiala.

Flick’s system requires a high press from those in the forward line. Coman and Gnabry have absorbed this after years at the Allianz Arena, but Sané has yet to add such defensive intensity to his game. This was highlighted by Bayern Munich chief executive Karl-Heinz Rummenigge after one particularly underwhelming performance earlier in the season.
“God gave him incredible talents. I only believe one thing: he has not yet reached this FC Bayern gene,” said Rummenigge. “We have done everything we can to ensure that he comes to Bayern. We encourage every player, but we also challenge. He has to internalise that and the team supports him. He has to take the next step, Leroy has to adapt his character to FC Bayern.”

The problem is that Guardiola demanded something similar from Sané during his time at the Etihad Stadium without much luck in getting through. At 25 years old, he is approaching something of a career crossroad. It’s getting to the point where it is no longer enough to be a potentially world-class player. Sané needs to be about more than just his physical attributes. If it isn’t getting through now, when will it ever?

“In positional play, in the general perception of the entire game, in tactical behaviour both offensively and defensively – Guardiola downright reprogrammed me,” Sané explained when asked to shine a light on how he’d been made to think differently about his game while at City. “It’s the simple movements that make you think, ‘Oh, never’. But when you implement them, you realise very quickly that Guardiola is right. What he advises helps a lot, it makes the game easier and faster. Tactics are the most important thing to him.”
There isn’t much evidence of Guardiola’s teachings in the way Sané has played for Bayern Munich this season, though. Another sign of this is in how careless the 25-year-old often is with the ball – only Robert Lewandowski has a higher rate of dispossession per match than Sané does for the Bavarians this season. Sané isn’t doing enough to win the ball back and he’s losing it far too frequently.

While Sané wasn’t always the perfect Guardiola player for City, he always had his final product. The winger registered 10 goals and 10 assists in 31 Premier League appearances in his final full season at the club. The fact that only 21 of these appearances were starts makes his output that season even more impressive. Sané scored 16 times in all competitions during the 2018/19 season from an expected goals (xG) value of 8.92, revealing just how effective he was in front of goal.

11 – Leroy #Sané has been directly involved in 33 goals in all competitions last season, 11 more than Ousmane #Dembélé (22), with both players starting 30 games each. Comparison. pic.twitter.com/r3HV3q8jSF

This season, though, Sané has lost his conviction. This was evident in the wasteful performance he produced in the Champions League quarter-final second leg against Paris Saint-Germain. With more composure in the final third, Sané could have been the one to send Bayern Munich into the competition’s final four. This was compounded by a poor display against Wolfsburg just days later, when Sané had the second-highest xG value of anyone on the pitch, but failed to score.

Guardiola always insisted he wanted Sané to stay at Manchester City right up until the moment he secured a return to the Bundesliga, but the way he knocked the winger down the pecking order suggests he privately felt rather differently. The player Bayern Munich have struggled to get the best out of this season is one Guardiola knows well.