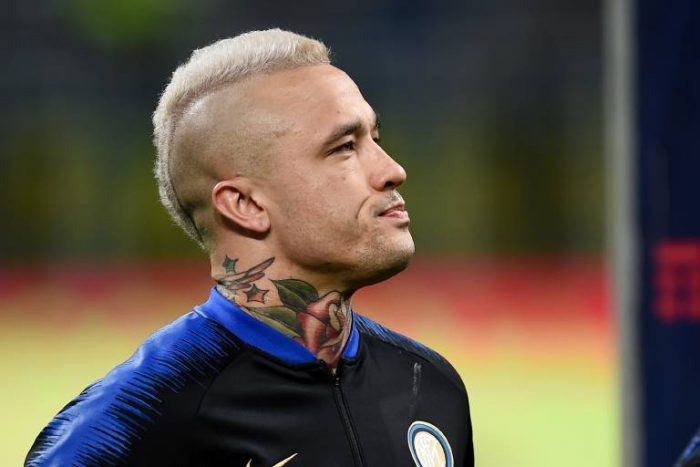 The blonde spike crowning the top of his head like a dinosaur’s razor fin.  The tattoos snaking down along his arms, up around his neck, exploding into a rose across the centre of his throat. The muscular, compacted build. Radja Nainggolan looks torn from the pages of a graphic novel, a punk-ish superhero ready to take on all comers. He plays like that too.

Five-foot-nine but with the high, rounded shoulders, whirring short strides and low centre of a smaller man– his style of play is almost as idiosyncratic as his aesthetic.

For a new generation of fans, YouTube is the main prism through which they receive the world, football included. Few players are more YouTube compatible than the man nicknamed ‘Il Ninja’ – his personal highlights reel looks like something out of a Nike commercial.

Most of Nainggolan’s top moments begin with him out of possession. Courtesy of a darted interception, a stabbing tackle or the toss of a shoulder, that quickly changes. He’s one of those rare players seemingly blessed with a gravitational pull all of his own – drawing any ball that wanders within his orbit is instantly and irresistibly under his control.

In his first full season for Roma, Nainggolan racked up an average of 2.9 tackles per game in Serie A – numbers which would look good for a centre-back and which made him one of the league’s top ten midfield tacklers

But he’s only just getting started. Once Nainggolan wins the ball and starts charging forward, possibilities burst into existence before him – he can beat a man, spray a pass, or send the ball crashing into the top corner all by himself. At times, it is hard to tell which is his stronger foot.

Though there’s a wealth of Nainggolan content to sift through online, his whole game can be effectively summed up in one signature move. He surges towards an opponent, dives into a full slide tackle and bounces back onto his feet, now in possession, now flying up the field. All in one seamless motion. Over and over again.

In his first full season at Roma, he claimed his place in the Serie A Team of the Year. In the three campaigns that followed, no-one managed to shake him from it. As the motor, the menace and, on occasion, the magician at the heart of that Roman side, he helped inspire the heroic 2017/18 Champions League run in which they bested Barcelona and made the semi-finals. Nainggolan featured in all but one of those European games, grabbing a pair of goals and assists along the way.

Though even he couldn’t unlock the iron grasp Juventus have held over Italian football for the last decade, he pushed Roma to second place in his first full season, and did so again two seasons later, cutting the gap to just four points.

His time in Rome saw him take the field alongside the likes of Mo Salah, Daniele De Rossi and Francesco Totti. He never looked out of place. According to WhoScored.com, he ranked amongst the top ten long passers in Serie A each year, even cracking the top five on one occasion –  a testament to his ability to turn defence into attack in the blink of an eye.

By the time he left, he had racked up 33 goals and 29 assists for the Roman club, establishing himself beyond dispute as one of the game’s most complete midfielders.

Nainggolan’s value as a player has often been occluded by his infamous love of cigarettes and nightclubs. Even as he’s dazzled, year after year, on the park, we’ve often struggled to see beyond the surface.

This summer he moved to Cagliari on loan after a poor, injury-plagued season at Inter Milan in which he was only able to complete 90 minutes on 13 occasions. It was as part of that Sardinian side that Nainggolan first burst onto the scene back in 2010, and he has often credited it with moulding him on and off the pitch. It’s also his wife’s hometown – a factor that became especially important to them after her recent cancer diagnosis. Football fades into insignificance in the light of such things, but the hope is that Cagliari provides a safe haven for them to regroup in.

At 31 years of age, his international career looks to be behind him as well. Having been deemed surplus to requirements by Milan manager Antonio Conte —the same coach that once placed Nainggolan at the very top of his Chelsea shopping list— it appears as though the Belgian maestro is beginning to wind down.

As we watch someone move into the twilight of their career, it’s natural to ask – how will their tale be told in five, ten, twenty years time?

It feels like every year we are implored by one pundit or another to appreciate the likes of Cristiano Ronaldo and Lionel Messi while we have them, the true scale of their achievements likely to only be seen properly in the game’s rear-view mirror. With Radja Nainggolan, the sense that we’ve been half-missing him all along is even stronger.

“Being yourself can be bothering” he told his Instagram followers, as he announced his retirement from international football.

So, once the dust settles and the cigarette smoke clears, how will we remember him?

The first instinct will likely be to recall him as a rebel god of untapped potential, a George Best-type figure whose brilliance was undeniable but who never made it quite as far as he might have. Radja Nainggolan’s image has always been tied to the photos of him out on the town. The odd swear-laden video clip and his trouble with timekeeping have contributed to the idea of him as a player hobbled by a party-boy lifestyle.

There is significant evidence that the George Best myth itself is not entirely accurate, and it’s an equally awkward fit for Nainggolan. During his time at Roma – the period in which his “bad boy” image was cemented – he made over 40 appearances a season, rarely playing less than the full ninety minutes. The quality of those performances has already been attested to, making it hard to argue with Nainggolan’s own continual assertion that he could unwind in his own way and still run the Roman midfield, week in, week out.

By his own admission, Nainggolan was never blessed with the technical talents of a George Best or a Leo Messi. He made himself valuable through relentless graft – the same quality which saw fans and teammates alike fall in love with him. The idea of him pissing away his powers on nights out just doesn’t quite jive.

He might be remembered in similar terms to his one-time captain Francesco Totti– players who put the club they loved ahead of personal success. Like Totti, Nainggolan had offers that would have taken him to within touching distance of silverware. We can never fully account for all the variables of a “what if?” scenario, but it seems likely that a top-level team with Nainggolan at its centre would have found its way to at least one set of winner’s medals. But he chose to stay at Roma throughout his peak, pushing them to greater heights rather than finding a higher wave to ride.

He might find himself clubbed in with George Best for another reason – alongside the likes of George Weah, Laszlo Kubala and Eric Cantona as great players who never made it to a World Cup.

While Best and Weah were icons helplessly tied to less competitive national sides, Nainggolan arrived as part of the golden generation that blessed Belgium with Kevin de Bruyne, Eden Hazard and Romelu Lukaku and took them to the final four of the last World Cup. Successive managers omitted him from their World Cup squads, with Roberto Martinez’s decision to leave him out in 2018 prompting widespread outrage amongst fans. It’s hard to believe that a player performing at the level of Nainggolan in 2018 – hot off a blistering Roman campaign and being linked with Chelsea, Manchester United and Arsenal – would have left out for footballing reasons, suggesting that his private life was the source of his manager’s disapproval. Nainggolan himself believed that he was being treated unfairly and retired from the national side with 31 caps.

We might remember him as a great player screwed over by a prudish establishment. Those looking to embellish the myth further might even claim that Belgium would have gone all the way in Russia if they had Nainggolan prowling the midfield rather than Marouane Fellaini or Nacer Chadli.

Maybe the ultimate lesson, though, is that we don’t have a box to put him in. Throughout his career, both on the park and off it, Radja Nainggolan has always done it his way. He’s been a hard-tackling number 10, a party animal who never missed a game. He’s been one of the best in the world, a game-running centre-mid worthy of comparison with the likes of De Bruyne, N’Golo Kante or Luka Modric. And he’s never won a trophy.

In the end, that exact impossibility of definition him might just be the thing that has defined Radja Nainggolan most of all – one of modern football’s great enigmas, making the game all the more exciting for it.