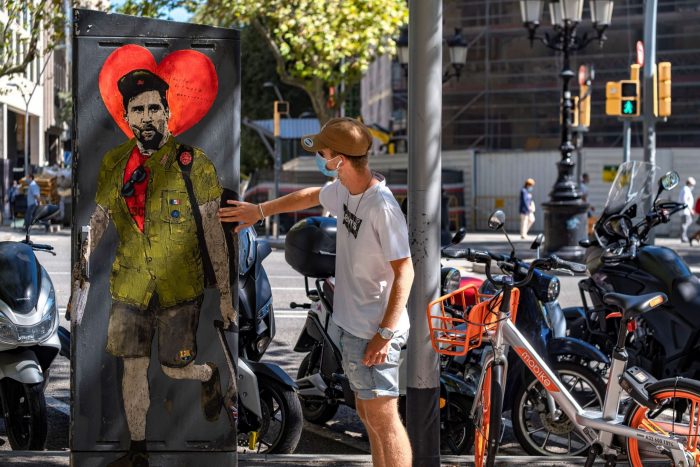 This week Lionel Messi made headlines yet again when he revealed he would be staying at Barcelona, after handing in a transfer request just a week before. Messi has spent close 2 decades at the Catalan giants, but following a dire 2019-20 campaign, he decided to activate a clause in his contract that would allow him to leave the club on a free transfer at the end of the season. Club president Josip Bartomeu, however, blocked Messi’s exit, claiming that the deadline for the move – originally set for the traditional close of the season in May – had been missed due to delay enforced by COVID-19. This meant that the only way for Messi to leave was if either another club to pay his €700m release clause, or if the Argentine took the club to court.

But in an exclusive interview with Goal that accompanied the announcement of his U-turn, Messi claimed this was not something he was willing to do, and would therefore be staying at Barca. As part of that interview, however, Messi disclosed several shocking details about his treatment by Bartomeu during the saga and the wider health of the club in general.

Discussing the direction the club has taken more generally, Messi then laid some damning claims against the team he has been forced to commit his immediate future to. “The truth is that there has been no project or anything for a long time,” he stated, “they juggle and cover holes as things go by.”

But while revealing, his assertions speak to long held concerns he has had about the management of the club. As such, he claims his desire to leave was not a knee jerk reaction to their humiliating 8-2 loss at the hands of Bayern Munich, but rather a considered decision that played out against the backdrop of three humiliating Champions League exits in three years and a season that saw them concede the La Liga title and fail to reach the Copa del Rey final.

But while he has decided to stay, it is unlikely that this is the end of the story. Barcelona are keeping a player who doesn’t want to be at the club and who also feels deceived by the hierarchy. What’s more, the finances of Barcelona at present could do with having Messi removed from the wage bill. Their expected income from this campaign is a reported €700m, a huge reduction on the €1bn from last season, and with one man set to take more than €100m of that, it is unlikely that both parties will be happy for long.

?❤️ Leo #Messi: “I will give it my all. My love for Barça will never change.” pic.twitter.com/xBh29dTqpr

Nations League Back in Action

International football returned across Europe this week in the form of the Nations League. The biennial competition designed to add more competitive football to the international calendar was full of surprises in it’s debut run out, with Portugal claiming the title in June 2019, and the first round of games in this year’s competition was no different.

England were in action on Saturday in Reykjavík as they played Iceland for the first time since the Nordic minnows dumped England out of Euro 2016 four years ago. England dominated the ball for the majority of a game that felt more like a pre-season friendly than a competitive international fixture. But the game sprang into life in the closing stages as Kyle Walker was sent off on the 70 minute mark for a second yellow card offence. With Southgate’s men down to 10 men, this should have been Iceland’s opportunities to haunt England for a second time. But just before the 90 minutes were up, a harsh penalty was given against Sverrir Inagson who had blocked Raheem Sterling’s shot with his hand, leading to the centre-half’s subsequent sending off. Raheem duly slotted the ball home, leading many in the stadium to think the game was done and dusted. But a minute later, Joe Gomez clumsily bundled over Hólmbert Fridjonsson on the edge of the England penalty area, giving Iceland the chance to level the game from the penalty spot. But former Aston Villa midfielder, Birkir Bjanason, sent the ball flying well over the top of Pickford’s goal giving England a narrow 3 points to take into their game against Denmark on Tuesday night.

Start off on the right foot ?? @England ? pic.twitter.com/RZAjyM7bZr

The other home nations were also all in action over the course of the week. Wales beat Finland 1-0 late on in Helsinki on Thursday, before they played host to Bulgaria on Sunday night, beating them 1-0 courtesy of a last gasp winner from Liverpool full-back Neco Williams. Both Scotland and Northern Ireland had mixed starts, however, with both sides earning a hard fought point against Israel and Romania respectively. Both teams are back in action on Monday evening, with Scotland travelling to the Andruv Stadion to face a Czech Republic side who can only field their reserves following the enforced quarantine of their senior side over the weekend, while Northern Ireland will host Norway in what will be a challenging fixture for Ian Baraclough’s men.

There were other interesting fixtures across the opening games of the competition as Germany were held to a 1-1 draw with Spain following a last minute José Gayá goal that saved his nation’s blushes in Stuttgart. Germany were then held to a 1-1 draw again, this time by Switzerland on Sunday night, while a rampant Spain demolished Ukraine 4-0 in a game that saw Ansu Fati break the 95-year record to become Spain’s youngest ever goalscorer at just 17 years and 311 days old. Spain’s Iberian rivals, Portugal, were also in action, easing past Croatia 4-1 in the Estádio do Dragão, Porto.

England will look to improve on their successful but unconvincing display in Reykjavík with a win away to Denmark on Tuesday night. Victory in Copenhagen will give the Three Lions a very solid platform on which to progress in a group that also features Belgium, the number one ranked team in the world.

Transfer Window Round Up

With the Premier League’s opening fixture between Fulham and Arsenal just five days away, the transfer window is nearing its conclusion. With transfers still able to take place until 7th October there is still time for teams to bring in new faces, but in the last week, some of the biggest transfer stories of the summer have finally reached their end.

The biggest and probably longest transfer saga of which was Kai Havertz’s long touted move to Chelsea. The German wonderkid has signed a 5-year contract with the Blues in a deal that is worth a supposed £71m, making him Chelsea’s second most expensive signing since the arrival of Kepa Arrizabalaga from Athletic Bilbao for £71.6m in 2018. The German international has shone for both Bayer Leverkusen and the national side in recent years, earning enormous interest from some of Europe’s elite clubs. But it is Chelsea who landed his signature during a summer in which they have spent just short of £200m, and they’re still on the look out for a replacement for the mistake-prone Kepa in goal. Chelsea have been able to afford such rampant spending through increased investment from owner Roman Abramovich and the high-profile transfers of Eden Hazard and Alvaro Morata to Real and Atletico Madrid respectively, taking advantage of their league rivals reluctance to spend in this uncertain financial climate.

Further north in Merseyside, Everton have been in similarly free spending form as they look to build a squad capable of pushing for Europe under legendary coach, Carlo Ancelotti. Last week, the Toffee’s announced the signing of the exceptional Brazilian midfielder, Allan, from Napoli for £21m. Their spending is thought to rise considerably in the next few days too, with Real Madrid midfielder, James Rodriguez, widely expected to sign for £25m and impressive Watford midfielder, Abdoulaye Doucouré, also likely to commit his future to the Blue half of Liverpool. The midfield additions will add some serious firepower to an Everton side who have looked more organised under Ancelotti, but lacking in flair. With creative talents like Andre Gomes, Bernard and Gylfi Sigurdsson already in their ranks, Everton are adding significant depth to a squad with sky-high aspirations.

Finally, back in London, Arsenal have re-signed Dani Ceballos on loan from Real Madrid. The Spanish midfielder was highly impressive for Arsenal last season, showing himself to be adept at both breaking up play and starting attacks from deep, as well contributing in the final third. He played 37 games for the Gunners last season, scoring 2 and assisting 2 in a campaign that saw him help Arsenal to a 14th FA Cup title.