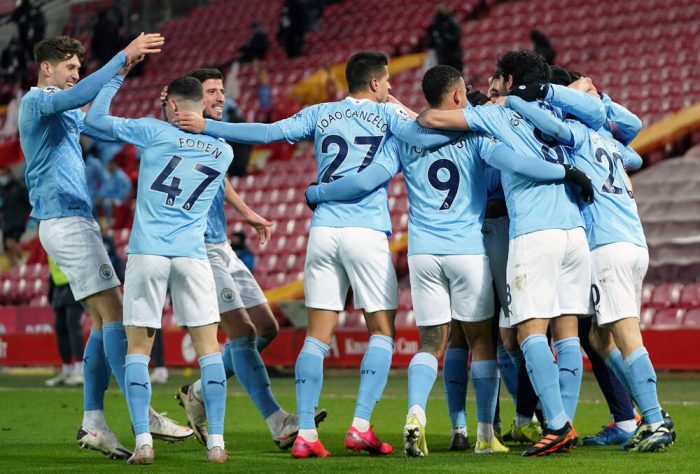 The Premier League title is now Manchester City’s to lose after their 4-1 demolition of Liverpool at Anfield on Sunday. Helped along their way by two calamitous goalkeeping errors from the usually reliable Alisson, Manchester City are now five points clear of second with a game in hand over Manchester United.

The fixture has come to define the outcome of seasons in recent years and City came into the game knowing that a win would be as valuable a statement as it would be three points. But after İlkay Gündoğan missed a penalty in the first half, many wondered whether City’s Anfield hoodoo was set to continue. But Gündoğan made up for his earlier error, tapping home the rebound after Phil Foden’s shot was initially saved. Liverpool were quick to reply, however, as Salah converted from the penalty spot after he was brought down by Rúben Dias.

But with just 15 minutes left on the clock, a moment of panic from Alisson saw him give the ball away to Foden who calmly pulled it back across the face of goal for Gündoğan to tap home. Three minutes later and the Brazilian keeper was at it again, this time guiding the ball to Bernardo Silva who set up Raheem Sterling for an almost identical goal to Gündoğan’s second. The game was over at this point, but a moment of magic from Foden sealed an emphatic win for City. Picking the ball up on the left-hand side of the Liverpool box, he drove at Andy Robertson, before shifting the ball onto his left and firing high into the roof of the net.

The win leaves City flying high at the top of the table while Liverpool languish in fourth. After a run of 68 home games unbeaten in the league, they have since lost at Anfield three times in a row, a feat they have not managed since 1963. Their current poor form is certainly not an indication of crisis, but rather a combination of fatigue, injury and a jam-packed calendar. What can’t be ignored, however, is the comparisons to last season. At this point in 2020, Liverpool were 27 points better off and well on their way to a record-breaking title. This campaign, their sights are now set simply on Champions League qualification.

Earlier on Sunday, Chelsea continued their fine run of form under new coach Thomas Tuchel as they beat bottom club Sheffield United. A fine finish from Mason Mount just before half time set the Blues on their way to a third win in four, before Antonio Rüdiger suffered a moment of madness when he poked the ball home past his own goalkeeper. But just three minutes later, Jorginho was on hand to put Chelsea back in front from the penalty spot, scoring his fifth league goal of the season.

There was also a win for Spurs who arrested their recent slump by beating West Brom 2-0 at home. Clinical finishes from Harry Kane and Son Heung-Min in the 54th and 58th minutes respectively earned the Lilywhites all three points, keeping them just four points outside the top four. Later on Sunday, Wolves drew 0-0 with Leicester in a game that damaged the Foxes slim hopes of claiming the Premier League title for the second time in five years.

Academy players have been Chelsea MOTM all three games under Tuchel so far 💪 pic.twitter.com/XVKWeTj8uI

Fans were treated to a spectacular game at Old Trafford on Saturday evening as Everton came from behind twice to draw 3-3 with Manchester United. An assured first-half performance from United saw them go into the break 2-0 up courtesy of goals from Edinson Cavani and Bruno Fernandes. But within the first seven minutes of the second period, Everton were right back in it thanks to a tap in from Abdoulaye Doucouré and a fine finish from James Rodgríguez.

United weren’t done yet, however, and showed all the fight and spirit they’ve needed to be title-challengers this season when Scott McTominay nodded home Luke Shaw’s out-swinging free-kick. But with all four minutes of added time played, Dominic Calvert-Lewin got on the end of a Lucas Digne free-kick and slotted home the most dramatic of equalisers. The result leaves Everton well in the hunt for a top-four spot, with the Toffees just three points behind Merseyside rivals Liverpool in fourth place. United remain in second but are now five points behind a City side threatening to run away with the title.

There was another thriller on Saturday as nine-man Newcastle saw off a Southampton side who lost 9-0 in the week away to Manchester United in the week. In fact, the Saints haven’t won since they beat Liverpool on 4th January, and that lack of confidence showed. Joe Willock, on loan from Arsenal, got the Magpies underway before Miguel Almirón made it 2-0 on the 26th minute. Takumi Minamino then got a debut goal of his own four minutes later when the Japanese forward on loan from Liverpool fired Southampton back into the game. Almirón was on the scoresheet again, however, netting his fourth league goal of the season to make it 3-1.

The real challenge came in the second half, however, when James Warde-Prowse netted a typically stylish free-kick just moments before Jeff Hendrick was sent off for a second bookable offence. But in admirable style, Newcastle held on for a famous victory, a task made all the more taxing when they were reduced to nine men on the 79th minute — 50/50 challenge saw Fabian Schär stretchered off with all of Newcastle’s subs already used. Combined with Fulham’s draw against West Ham, the Magpies’ win means that they are 10 points clear of the relegation zone.

Elsewhere in the Premier League, there was also a win for Aston Villa who beat Arsenal thanks to an early strike from Ollie Watkins. Burnley drew 1-1 in their relegation six-pointer against Brighton, while Fulham failed to win for a 12th game in a row when they drew 0-0 with West Ham.

Saint-Maximin brings it down and puts it on a plate for Joe Willock to slot it home on his debut! 🙌

What a start for Newcastle! pic.twitter.com/n2nkwtAF2U

Juventus continued to pile the pressure on league leaders AC Milan after they beat fellow title challengers Roma 2-0. A stylish goal for the 36-year old Cristiano Ronaldo got the side from Turin underway, before Roger Ibañez turned Dejan Kulusevski’s cross into his own net to double the host’s lead. The win now leaves Juve just five points behind AC Milan and with a game in hand over the Rossoneri.

AC were able to claim a comfortable win themselves over the weekend, beating Crotone 4-0 with Zlatan Ibrahimovic scoring his 500th career club goal in the process. Inter, meanwhile, beat Fiorentina 2-0 on Friday evening to keep the pressure on their local rivals.

In Germany, Borussia Dortmund fell back into old habits when they lost 2-1 away to Freiburg. Their recent win over Ausburg was seemingly a turning point for Edin Terzić’s men, but two long-range strikes from Jeong Woo-yeong and Jonathan Schmid left Dortmund 2-0 down after 52 minutes. A 76th-minute strike from the promising Youssoufa Moukoko halved the deficit, but it was not enough for Dortmund to rescue a point. The result now leaves them in sixth, four points below Eintracht Frankfurt in the final Champions League spot.

And in Spain, Real Madrid returned to winning ways by beating Huesca 2-1 in a professional comeback performance. The Madridistas were initially behind when Javi Galán scored in the 48th minute, but a brace from defender Raphaël Varane kept alive their slim hopes of retaining the title. There was also a win for Barcelona who overcame Real Betis in a thrilling 3-2 encounter, while Real Sociedad recorded their first win in five games by beating Cádiz 4-1 at home.

Juve leapfrog Roma in the Serie A table to move up to third. pic.twitter.com/MUlyYshIzt