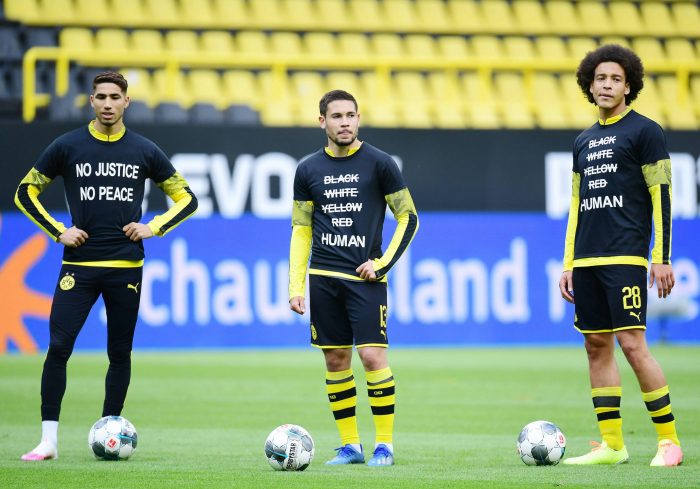 Bayern Move Within Two Games of the Title

It was business as usual for Bayern Munich as the home team curse continued in the Bundesliga. The Bavarians were a goal down after 9 minutes thanks to a strike from Argentine forward, Alario, playing in place of the injured Kai Havertz. But it wasn’t long before Bayern were with the lead before half time, courtesy of goals from Kingsley Coman, Leon Goretzka and Serge Gnabry. After the break Robert Lewandowski was on hand to head home his 30th Bundesliga goal this season just before Florian Wirtz clawed back a bit of pride for Leverkusen, becoming the youngest goalscorer in the Bundesliga in the process at age 17 years and 34 days.

Munich’s peerless display means that they are now just two games away from an eighth consecutive Bundesliga title. They have now won 5 from 5 since the season restart and have lost only once under Hansi Flick since he took over from Nico Kovac in November. Their season could be wrapped up in 8 days with victory at Werder Bremen and, with a German Cup semi-final against Eintracht Frankfurt to navigate on Wednesday, they will certainly have eyes on the double.

Dortmund maintained their ever decreasing chances of dethroning Munich with a slim 1-0 victory over Hertha Berlin. Hertha have stood out since the Bundesliga resumed, earning a revenge victory over cross-city rivals Union Berlin and holding RB Leipzig to a hard earned draw. But their excellent run was brought to an end by a Dortmund side led by a sparkling Jadon Sancho. The England winger was electric in his second start since returning from a calf injury, playing a crucial role in Enre Can’s goal and nearly scoring himself after a fine team move.

RB Leipzig were again frustrated, drawing for the third game in five against bottom side Paderborn. Julian Nagelsmann’s promising young side were their usual exciting selves going forward but inexperience cost them all three points. Leipzig were reduced to 10-men after centre back Dayot Upamecano kicked the ball away while on a yellow card, opening the door for a second half barrage from Paderborn that earned them a stoppage time equaliser from veteran striker Christian Strohdiek. Elsewhere in the Bundesliga, Schalke somewhat arrested their slump with a draw at Union Berlin while SC Freiburg were the only side to win at home across the whole of Gameweek 30.

Robert Lewandowski gets his goal!

…And @DFletcherSport is taking the assist ????

That's 44 goals for the season, by the way ???? pic.twitter.com/iMQ2JpFRkA

Timo Werner moving to Liverpool was widely assumed to be almost inevitable three weeks ago. Klopp had put in the legwork, he fit into the profile of the side nicely and would offer some welcome respite from the Red’s fabled front three. But early last week rumours began to swirl that other teams were still in the market for him. Then, late on Thursday, it leaked out that Chelsea had signed a deal with the young German striker worth up to £54 million.

The surprise move raises questions about what went on behind the scenes at Liverpool. It is understood that their withdrawal from the deal was purely financial, with COVID-19 subjecting the club to unprecedented losses. The pandemic also removed any chance for Klopp to slowly ease Werner into his starting 11 while Salah and Mane were playing in the Africa Cup of Nations, with the tournament now pushed back to 2022.

Chelsea’s late move for Werner not only shows the shrewdness of their transfer policy but exhibits their ability to act on necessity. The need to add an extra attacking option was more potent at Chelsea than at Liverpool, with the combination of Werner and Tammy Abraham proving to be a truly mouth-watering partnership. Having played large parts of this season as a wide inside forward alongside the more central Yussuf Poulsen, it would appear that Werner has been brought in to help support Abraham rather than replace him. It will still be interesting, however, to see how Chelsea’s number 9 responds to the signing. Nonetheless, with the signing of Hakim Ziyech from Ajax confirmed earlier in the season, Chelsea are setting themselves up to be one of the most exciting teams in Europe next season.

Following the death of George Floyd, an unarmed black man, at the hands of police in Minneapolis on 25th May, the issue of racism has been front and centre in global politics. Black Lives Matter protesters have taken to the streets in cities across the world, as well as in the US, demanding tangible positive change and the football community has been no different.

Last weekend’s Bundesliga action saw a series of statements from players as Jadon Sancho, Achraf Hakimi, Marcus Thuram and Weston McKennie came out in support of the Black Lives Matter movement. This week, however, the whole Bundesliga publicly backed the movement, with players and management taking a knee in solidarity before kick-off in every game this weekend. Dortmund players also wore shirts that read “No Justice, No Peace” in their warm-up, while captains across the wore armbands with “Black Lives Matter” written across them.

Here in the UK, high-profile players used their platforms to signal their unwavering support for the recent protests in the UK and to raise awareness of the work that still needs to be done. Speaking to the BBC on Sunday, Raheem Sterling pledged his backing to the protesters, stating that “the only disease right now is the racism we are fighting.” Earlier in the week, Aston Villa defender Tyrone Mings was seen at a Black Lives Matter protest in Birmingham, later stating on social media, “I make no apologies for standing up for what I believe in.”

"There's only so much people can take… people are tired"

Manchester City forward Raheem Sterling backs anti-racism protests taking place across the UK, telling #Newsnight: "The only disease right now is the racism that we are fighting"https://t.co/iLUiICNGiB pic.twitter.com/uKcyioYmYh