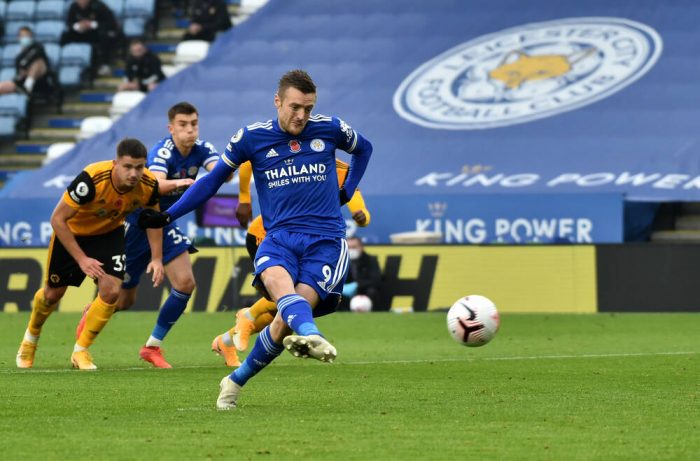 This weekend saw a variety of different sides sit atop the Premier League table, but it was Leicester who found themselves in prime position come the end of the action following their dramatic 1-0 win over Wolves. The side from the East Midlands took the lead early on through a Jamie Vardy penalty, but not without any controversy. Dennis Praet’s whipped ball from the right-hand side hit Max Kilman on the arm from point-blank range meaning that, under the new handball rules, Anthony Taylor had little choice but to point to the spot. Leicester had the opportunity to double their lead just before half time from the penalty spot again after Rayan Ait-Nouri hacked James Justin in the box, but this time Vardy couldn’t capitalise as Rui Patricio saved from the former Fleetwood man. Nonetheless, Leicester were able to hold out for a well-earned point to take them to the summit of the table.

Earlier in the day, Spurs had taken the top spot before Leicester’s win. Jose Mourinho’s men have been in revitalised form this season, with goals flowing in most of their games, but their win against West Brom demonstrated their ability to grind out results. The Baggies are winless since their return to the Premier League and, while their showing against the Lilywhites was evidence of clear defensive improvements, their resolve was finally broken late on by Harry Kane’s cultured header. Spurs’ short spell as league leaders was their first spell as such since September 2017 and, based on recent performances and a hugely talented attacking line up, many are beginning to see a potential title challenge on the horizon from the North Londoners.

Sunday’s action also saw the clash of the best two sides in the Premier League over the last three years as Manchester City hosted Liverpool. As the winners and runners-up for three consecutive seasons now, all eyes are on these two sides this campaign to see if the relentless domination they have crafted can continue. But if Sunday’s fixture proved anything, it was that both were only capable of cancelling each other out. A rapid start from the Reds saw them take an early lead through a Mohamed Salah penalty, only for Gabriel Jesus to peg them back just before half time following a sumptuous turn and finish inside the box. The second half was a far more tepid affair, with neither side daring to commit too many men forward. Nonetheless, City will be feeling more optimistic about the immediate future after an injury to Trent Alexander-Arnold forced the England international off early, piling the pressure on a side who’s casualty list is starting to mount and leaving Jurgen Klopp fuming at the Premier League’s recent scheduling of games.

Finally, Sunday’s late kick-off witnessed the shock of the weekend as Aston Villa ran out 3-0 winners away to Arsenal, resuming the hot run of form that characterised their opening fixtures. Two goals from Ollie Watkins and an own goal from Bukayo Saka were the difference between two sides who were poles apart on the night. Arsenal failed to create many chances of note throughout the game, and any openings that they did manage to carve out were spurned as Alexandre Lacazette and Rob Holding missed the target either side of half time. But despite their poor performance, nobody should take anything away from a Villa side who, lead by Jack Grealish and Ross Barkley, were full of invention and determination, earning themselves their first win in 3 and 6th place in the table.

Despite their impressive transfer window over the summer, nobody expected Everton to be the early pacesetters in the league this year. But it looks like reality is finally catching up with the Toffees as they fell to yet another defeat on Saturday, this time against an out of form Manchester United. The Red Devils were in desperate need of a win following their own dismal run, and thanks to fine performances from Bruno Fernances and Marcus Rashford, that’s just what they got as they ran out 3-1 winners. Despite hitting the front early through Bernard, Everton’s defence looked shaky at best as a Fernandes double gave the lead to United just 13 minutes after Everton’s opener, with game rounded off as Edinson Cavani got his first goal for United just a few minutes from time. The international break couldn’t come sooner for those on the Blue half of Stanley Park, who will need to take the time off to regroup and come back stronger if they want to regain their early season form.

In Saturday’s 3 o’clock kick-off, there was another loss for Leeds United who had fallen to a 4-1 home loss to Leicester on Monday night. This time it was Crystal Palace who deepened the Whites’ issues, inflicting Bielsa’s men to another 4-1 defeat. Goals have been hard to come by for Crystal Palace of late, but strikes from Scott Dann, Jordan Ayew, an own-goal from Helder Costa and a gorgeous free-kick Eberechi Eze saw them cruise to victory. It could all have been so different, however, as five minutes after Dann’s opener, Patrick Bamford’s sumptuous clipped finish was controversially ruled out for offside by VAR. Despite appearing to be perfectly in line with the Palace backline when the ball was played through to him, it was his outstretched arm — used to point to where wanted the ball — that proved to be the deciding factor. Despite it being illegal to score with your arm, a change to Premier League rules made over the summer now means that if a player’s upper arm is offside when the ball is played, then so are they. But despite the controversy, Palace’s game plan was spot on as they took full advantage of Leeds’ high line, finding acres of space between them and the goal once they got past the last man.

Chelsea have been in fine form of late, not conceding a goal in 5 games before this weekend’s fixture against Sheffield United. But it was the side the Steel City who took the lead first following David McGoldrick’s clever flicked finish in the 9th minute. But Chelsea weren’t behind for long as goals from Tammy Abraham and Ben Chilwell gave them a 2-1 advantage before half time. A free header for Thiago Silva in the 77th minute and a 4th goal of the season for Timo Werner in the second half rounded off a fine performance from the Blues as they ran out eventual 4-1 winners. It was Hakim Ziyech, however, who stole the show. The first signing of Chelsea’s summer spending spree, the Moroccan international has had to wait for his moment in the limelight due to injury setbacks, but his recent performances have been well worth the wait. His vision and weight of pass are what sets the playmakers apart, and with both Timo Werner and Tammy Abraham finding the back of the net of late, Chelsea are starting to bear their teeth once more.

🤔 Patrick Bamford was given offside for this as Crystal Palace slotted four past Leeds, at Selhurst Park.

In what was a bizarre game on Sunday night, Valencia came from behind to thrash Real Madrid 4-1. The Madridistas had taken the lead early on through a gorgeous strike from Karim Benzema from outside the box, but before too long Valencia were back on level terms following a penalty from Carlos Soler. Valencia then took the lead through a crazy own goal from Raphael Varane who somehow managed to scoop the ball over his own goalkeeper, colliding with him as they both tried to scramble the ball away from the goal. The second-half continued in a similarly bizarre vein as Valencia were awarded a further two penalties, both of which Soler cooly slotted home, earning him a hat-trick and consigning Real to their second loss of the season.

There was yet another win for real Sociedad who cemented their position at the top of La Liga with a 2-0 win over Granada. But it was not a full-strength Granada side they faced on Sunday as a rapid spread of coronavirus in the squad left the side from Andalusia with just 7 senior players available to play in the fixture. But with appeals to the Spanish FA to postpone the game rejected, Granada were up against it from the off, effectively consigned to their first loss in 6 league games.

In Germany, Borussia Dortmund and Bayern Munich played out a thrilling game that eventually saw the Bavarians edge a victory to go top of the Bundesliga. A goal from Marco Rues opened the scoring just before half time, but a deflected shot from David Alaba levelled things in added time of the first half. Lewandowski and Leroy Sane were then on hand to give the visitors a two-goal cushion in the second half as Bayern took the lead, and despite a late comeback from Erling Haaland, the hosts could not find a way back into the game. Bayern now sit top of the table with 6 wins form the first 7 league games, their best record in the Bundesliga since 2015.