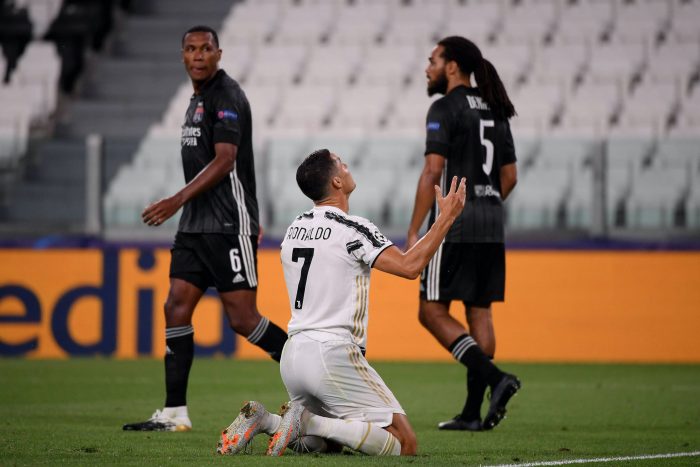 The Champions League returned on Friday night with some huge questions still left unanswered. Three of the four remaining Last 16 games were still arguably left hanging in the balance after COVID-19 forced the competition to halt way back in March. Manchester City welcomed Real Madrid to the Etihad in one of the more finely poised games of the round. A Kevin De Bruyne masterclass in Madrid had seen City come from behind to win 2-1 on the night. Nonetheless, they still needed a positive result at home against the most successful Champions League side ever to ensure their place in the quarter finals. The game started in the best way possible for the Cityzens inside 8 minutes, with Gabriel Jesus pouncing on Raphael Varane’s loose ball back to Thibaut Courtois, which he duly played across the face of goal for Raheem to Sterling to slot home. Madrid weren’t out of the game yet, however, and were back on level terms 20 minutes later after a beautifully worked move was finished off by Karim Benzema. But it was a lack of concentration that ultimately let down Los Blancos as Varane was again caught out playing a poor ball back to Courtois. Jesus was again the man putting the pressure on the French centre half, but his delicately chipped finish over the sprawling Belgian keeper was goal good enough to win any tie. City eventually held out leaving Madrid to rue their missed chances while the blue half of Manchester can look forward to their European adventure continuing in Lisbon.

The other game on Friday night was Juventus v Lyon. The French outfit had won the first leg 1-0 courtesy of Lucas Tousart goal, but hope of an away leg victory was in short supply against a Juventus side with the most prolific Champions League goal scorer in it. But those faint hopes were given extra fire early on after Memphis Depay tucked away a penalty after Houssem Aouar was clipped by Rodrigo Bentancur. Two goals from Cristiano Ronaldo either side of half time saw Juventus win on the night, but Lyon’s early away goal meant that it would be the French side going through to the quarter finals. Their victory ensured a meeting with Manchester City in the next round, while Juventus’s loss saw them fire Maurizio Sarri after just one season in charge. He has since been replaced by long serving playmaker Andrea Pirlo, while Cristiano Ronaldo is understood to be considering his future after two mediocre seasons in Italy by his impeccably standards.

Chelsea travelled to Munich on Saturday night to try and overcome what was a seemingly impossible aggregate score. Bayern had thumped the Blues 3-0 at Stamford Bridge before lockdown and Chelsea’s hopes of repeating their Champions League final heroics in 2012 looked remote to say the least. Lewandowski was on hand to extinguish any potential comeback inside the first 10 minutes when he slotted home cooly from the penalty spot after he was brought down by Willy Caballero in the Chelsea goal. His finish was his 52nd of a season that is a year old for Bayern at this point, meaning that he has scored one goal for every week of it. The gulf in class between the sides was clear throughout the game. Chelsea’s defensive deficiencies that have been so clearly exposed throughout the season were once again on full show as Lewandowski was afforded so much time on the ball that was able to pick out Ivan Perisic with ease, who duly slotted home Bayern’s second. An excellent finish from Callum Hudson-Odoi 4 minutes later was sadly ruled out for offside by VAR, but just before half time, Manuel Neuer spilled a shot into the path of Tammy Abraham who poked home his 18th goal of the season to give Chelsea fans something to cheer about. There was no fairytale ending, however, as goals from Corentin Tolisso and Lewandowski sealed a resounding 7-1 aggregate victory over a Chelsea side who may have wrapped up Champions League football for next season, but have finished the campaign in disappointing style following their FA Cup final loss last week.

The other game on Saturday night was Barcelona v Napoli and it was balanced on a knife edge after the first leg. Napoli had held Barca to 1-1 draw at the Stadio San Paolo and came into the game ready to take advantage against a Barcelona side still smarting from a calamitous end to the La Liga season. But, as with all the other Last 16 ties this weekend, an early goal from the eventual winners set the tone for the rest of the game. For all their individual flair, it was a simple headed goal by Clement Lenglet from a corner that opened the scoring for the Blaugranes after 10 minutes. Lionel Messi and Luis Suarez were then on hand to kill the tie off, making it 3-0 before half time, only for Lorenzo Insigne to slot home a penalty to make it 3-1 with practically the last kick of the half. A strong second half showing then followed from the Neapolitan side, but it wasn’t enough as Barca eventually held out to set up a mouth-watering quarter final tie against Bayern Munich. The other two quarter final ties are RB Leipzig v Atletico Madrid and Atalanta v PSG, which are all to be held in Lisbon as one-off ties instead of the standard two-legged format.

???? @Cristiano has scored 1.5% of all goals in @ChampionsLeague history. pic.twitter.com/LvIQFiCpip

Wednesday night witnessed the return of the Europa League and there was still a heavy British interest in the competition. Manchester United had comprehensively beaten Austrian side LASK 5-0 in Linz before lockdown and we weren’t expecting any miracles when United welcomed them to Manchester. A stunning strike from LASK’s Philipp Wiesinger after 55 minutes made the tie a little bit more interesting, but an immediate response from United saw Jesse Lingard equalise 2 minutes later. Martial finished off the game 2 minutes before time after his shot was fumbled on the line by the LASK goalkeeper, giving United the victory on the night as well as on aggregate. The victory means that they will face FC Copenhagen in the quarter finals, which will be something of a homecoming for Ole Gunnar Solskjær who gained some of his coaching experience in the Danish capital.

Wolves took on 45-time Greek champions, Olympiankos, in the most finely balanced tie in the round. Having been held to a tight 1-1 draw in Athens, Wolves held a slight advantage and after Daniel Podence was clumsily bundled to the ground by goalkeeper, Bobby Allain, Raul Jiminez had the chance to extend the gap. The Mexican talisman duly slotted away the penalty but, for the remaining 80 minutes or so, Wolves were made to hang on to their narrow lead as Olympiakos pushed them all the way. In the end, the English side held on setting up their first European quarter final for 48 years. They will contest the quarter final against Sevilla who that night had beaten Roma 2-0 in one of the two one-off Last 16 games.

Rangers were the last Scottish side left in the competition and faced an uphill battle in their second leg feature against Bayer Leverkusen. The German side had won the first game at Ibrox 2-1 and with a team packed with serious talent, it was going to be extremely difficult for Steven Gerrard’s men to turn it around away from home. Moussa Diaby’s second half strike was all that was needed to send Leverkusen through to the next round where they will face Inter Milan, who themselves beat Getafe 2-0 in the other one-off Last 16 game. The fourth quarter final will be contested between Shakhtar Donetsk and Basel in what is turning out to be one of the most competitive Europa League’s in recent memory.

Raul Jimenez has been directly involved in 30 goals across the Premier League and Europa League for Wolves this season:

A stellar campaign so far. ???? pic.twitter.com/HfZTl8nV63

Fulham came out on top of the Championship playoff final on Tuesday as they beat West London rivals, Brentford, 2-1 after extra time. It was one of the hardest to call playoff finals for the last few seasons and it played out as a pretty tense affair for the most part, with Fulham just edging it overall. After a first half of general promise, the second half largely fell pretty flat, meaning that extra time was needed to separate the two sides.

But the two Fulham goals that eventually handed the Cottagers the win came from the most unlikely of sources. Left back Joe Bryan had only scored once this season before the playoff final, but his two goals on Tuesday were of the quality usually reserved for a top class centre forward. His first came from a free kick that was a long way out, but seeing David Reya off his line, he sent a curling shot past the hapless Brentford keeper to give Fulham the lead just before the end of the first half of extra time. But if his goal was clever, then his second was inspired. Charging forward from left back, he played a one-two with Aleksandar Mitrovic on the edge of the Brentford penalty area to get away from two defenders and then calmly slot the ball underneath the onrushing David Reya. Brentford managed to squeeze in a very late consolation goal from Henrik Dalsgaard, but at the final whistle the celebrations were coming from the Fulham bench.

Fulham’s win is their second playoff final win in two years and means they bounce straight back into the Premier League after their abysmal showing saw them relegated in 2017/18. They will look to add to their squad, but not in as drastic a way as they did two years ago. A key priority will be trying to get the signature of on loan Southampton midfielder Harrison Reed who has been so crucial in the centre of the park for Fulham this season. But with Pierre-Emile Højbjerg likely to sign for Spurs, the Saints could well choose not to let Reed go back out on loan.

Brentford on the other hand find themselves in the inevitable position of watching their side get pulled apart. Ollie Watkins looks set for a Premier League move with West Ham, Crystal Palace, Aston Villa and Leeds all interested. Saïd Benrahma is himself likely to be playing top flight football next year, with Leeds, West Ham and Aston Villa all interested. Rico Henry and Josh Dasilva are also in favourable positions to earn a step up the footballing pyramid but, due to the club’s unique transfer model, Brentford will still see themselves as able to replace their most vital assets. Last year’s sale of Neal Maupay after his 25 goal season for the Bees brought with it a lot of criticism that they had not adequately replaced him, but with Watkins picking up 26 goals from the central strikers position this season, Brentford will look for similar replacements in their own ranks.

????"By the time you get to Saturday having a beer and eating Chinese you are thinking about Monday morning!" ????

A very emotional Scott Parker on the pressure of management pic.twitter.com/lqhlQLVMGt