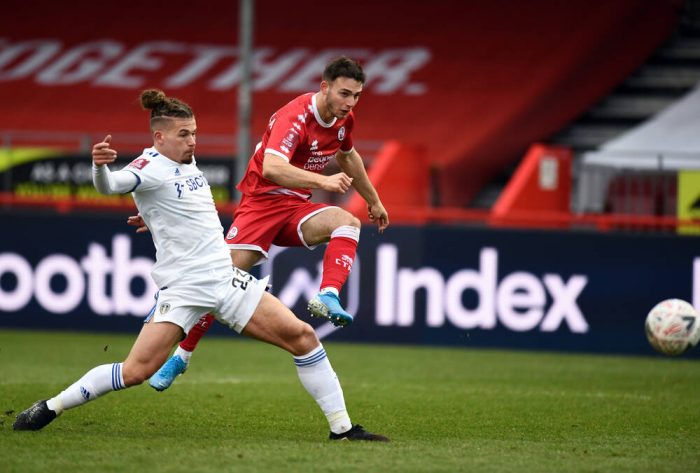 The FA Cup Third Round returned this weekend as teams from almost every part of the English footballing pyramid battled it out in the oldest club competition. The FA Cup has long been known for the huge upsets it can cause as sides from the lower reaches of the footballing hierarchy take on those at the very summit, and this weekend was no different. Crawley Town went into their tie against Leeds United on Sunday 6th in League Two, on the back of a decent run of form that has seen them push for the playoff places in recent weeks. But despite a string of decent results, they couldn’t have given themselves too much hope against a Leeds United side who sat 62 places above them in the Premier League.

But after withstanding a first-half barrage from Marcelo Bielsa’s side, Crawley picked their moments in the second period with expert precision. A break on the 50-minute mark saw Nick Tsaroulla on the edge of the Leeds box with a lot left to do, but somehow his low driven shot found its way past Kiko Casilla in goal to give the home side the lead. Three minutes later Ashley Nadesan found himself on the opposite side of the Leeds box following another break forward, and from an even more acute angle than Tsaroulla’s finish, snuck his effort through Casilla to double Crawley’s advantage. Leeds battled hard to find a response, but in the 70th minute, Jordan Tunnicliffe smashed home the third following a Sam Matthews free-kick that left many of those in white scrambling in the box.

There were 7 changes made to the Leeds side that lost to Spurs last weekend, but it was nonetheless a lineup that still featured the likes of Rodrigo, Ezgjan Alioski and Kalvin Phillips. Crawley’s win is the first time a side from the fourth tier has beaten a team from the top flight by a margin of three or more goals in 34 years, something which had only been achieved once before.

In one of Sunday’s later kick-offs, 8th tier Marine AFC hosted Premier League Tottenham Hotspur in what was the biggest gulf between two sides in the history of the FA Cup. Marine did well to hold out against Spurs the opening 24 minutes until Spurs’ summer signing Carlos Vinicius scored his first goal for the club with a tap in after rounding Bayleigh Passant in goal. 6 minutes later he added his and Tottenham’s second with another tap in before Lucas Moura made it 3-0 with an exquisite free-kick. Vinicius was then on hand to make it a first-half hat-trick for the Brazilian frontman, while in the second half Alfie Devine scored a stylish 5th for the Premier League side, making history as the youngest player from a Football League side to score in the FA Cup at the age of just 16 years and 163 days old.

On Saturday, there was more drama in the cup as National League Chorley beat Wayne Rooney’s Derby County. A serious outbreak of Covid-19 amongst the Derby ranks meant that they couldn’t field any of their first-team squad or the majority of their Under-23 team, meaning they were forced to rely on their youth side. As such, the average age of their team on Saturday was a lowly 19 years old, a factor that Chorley took full advantage of. The non-league side were ahead after just 10 minutes thanks to Connor Hall’s point-blank header and were able to seal the win with just 6 minutes of normal time remaining courtesy of Mike Calverly who was able to steer home Elliot Newby’s cross.

In one of the later games on Saturday, the holders Arsenal sealed their place in the 4th Round of the cup with a last gasp win at home to Newcastle. In what was a largely drab affair at The Emirates, fans at home were made to wait some 109 minutes for the first goal which came courtesy of Emile Smith-Rowe’s exceptional tight-angle finish who largely impressed on the night. 8 minutes later, Pierre Emerick Aubameyang scored just his 5th goal of the season, tapping home Tierney’s incisive left-sided cross.

The magic of the cup ✨ pic.twitter.com/php4jIGq9R

The Latest From Europe

Bayern Munich suffered their first loss of the season on Saturday as they fell to a 3-2 defeat away to Borussia Monchengladbach. The loss now leaves the Bavarians just 2 points clear at the top of the table, with second place RB Leipzig just behind them. Bayern had taken the lead after 20 minutes thanks to the ever-reliable Robert Lewandowski from the penalty spot, before Leon Goretzka was able to waltz through the Gladbach defence and hammer home a second 20-yards out.

But Gladbach weren’t behind for long. 2 goals from Jonas Hofmann in the 35th and 45th minutes had the hosts back on level terms, with the former Dortmund midfielder demonstrating the reasons for his recent international call-ups with 2 fine finishes. And then just after half time, Florian Neuhaus justified the hype that has been building around him with a sublime right-footed strike from long range that would eventually prove to be the winner. Gladbach held on for the remaining 41 minutes to make it 6 wins from their last 12 meetings with Bayern, while also blowing the title race in Germany wide open.

Elsewhere in the Bundesliga, Leipzig blew their opportunity to leapfrog Bayern as they lost at home to Borussia Dortmund. The newly revitalised Jadon Sancho scored his second goal in as many games before Erling Haaland rounded off the victory with a brace in the closing 20 minutes. Leipzig’s own Norwegian forward, Alexander Sorloth, grabbed a late consolation goal for the hosts, but it wasn’t enough to stop Dortmund from taking all 3 points to close the gap on Bayer Leverkusen in 3rd place.

In La Liga, Barcelona were able to continue their recent upsurge in form as they thrashed Granada 4-0 away from home. A classy instinctive finish from Antoinne Griezmann opened the scoring on the 12th minute before a sensational first-half brace from the irresistible Lionel Messi put the game out of the reach of the Andalusian club before half time. A second goal from Griezmann in the 63rd minute sealed the win for Barca who are now undefeated in their last 7 matches, winning 5 of them. It now means that the Blaugranes are just 3 points behind Real Madrid in second and 4 points behind leaders Atletico Madrid, a marked improvement from the beginning of the season when a draw to Alaves put them as low as 8th in the table.

Elsewhere in La Liga, Real Madrid opened the door for Barca to close the gap by drawing 0-0 with Osasuna away from home. Despite possessing 70% of the ball throughout the game, Madrid did little to make any significant breakthrough in a game dominated by fierce snowfall, recording just 1 shot on target from their 9 attempts. It all means that Atletico Madrid keep their top spot by just a single point, but with 3 games in hand after their fixture against Athletic Bilbao was called due to snow.

From giving away a penalty 😣
To scoring the winner 😍