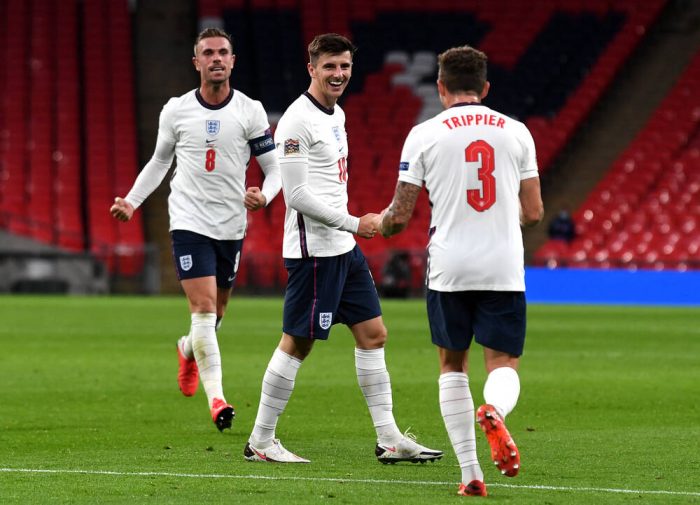 England came out on top against the world’s best team on Sunday evening as they came from behind to beat Belgium 2-1 in the Nations League. The Red Devils had taken the lead in the first 15 minutes at Wembley thanks to a penalty from Romelu Lukaku. The Belgian front man had been hacked down by Eric Dier as he surged past the hapless defender, earning himself a well deserved penalty that he was able to convert, grabbing his first career goal at Wembley. The rest of the first half was a supremely lacklustre display from the Three Lions, with Southgate’s questionable line up – which featured three right backs in his starting XI – playing some hopelessly negative football. As such, they could count themselves lucky that they were able to go into the break level, courtesy of a foul on Jordan Henderson from Thomas Meunier that led to a Marcus Rashford’s converted penalty. The second half, however, was a completely different story. England were far more aggressive in their press and desire to win the ball back, disrupting the creativity of Belgium’s midfielders, and breaking out at pace once the ball had been won back. They were quickly rewarded for their change in approach as Mason Mount was able to take advantage of some good fortune. Picking up a ball just inside the Belgium area, he took a speculative shot round the corner that deflected off the boot of Toby Alderweireld, sending the ball looping over Simon Migno into the back of the net.

Chances weren’t in short supply for either side as the final 20 minutes ticked by. Yannick Carrasco had the opportunity to poke home following a neat pass from De Bruyne, but the former Atletico Madrid man could not find the composure. There were also rare misses for Harry Kane and Marcus Rashford who could have both put the game out of sight, had both forwards not squandered gilt edged opportunities. Nonetheless, England will be happy with the result having also beaten Wales earlier in the week in an international friendly. They will be hoping this good run of form continues into Wednesday as they face Denmark in the fourth of their six Nations League group games, a group in which they now sit top.

Big team performance against a strong team! We take them ones all day… ???????? @England pic.twitter.com/CNyRcxtfVB

There were other key fixtures in the Nations League for the home nations over the weekend too, as Scotland extended their unbeaten run to over a year as they beat Slovakia 1-0 at Hampden Park. Thanks to a clever finish from QPR striker, Lyndon Dykes, the Tartan Army now sit top of their group with a decisive game against second placed Czech Republic on Tuesday to navigate.

The Nations League action was less joyous for the other home nations, however. Northern Ireland’s 1-0 loss at home to Austria leaves them rooted to the foot of Group B1, while Wales will undoubtedly be disappointed by their performance in their 0-0 bore draw against the Republic of Ireland. The result still leaves Ryan Giggs’s men at the top of Group B4, but no goals in their previous two games and the lack of fitness for the talismanic Gareth Bale will only serve to heighten Giggs’s anxiety going into Wednesday’s penultimate group stage clash against Bulgaria.

Norway were able to record their own landmark win on Sunday night. Their 2-1 loss to Serbia in midweek had dashed any hope they might have had for qualifying for the tournament in 2021, but was followed up by a resounding victory over Romania. Three goals from the irrepressible Erling Haaland and one from RB Leipzig’s Alexander Sorloth saw the Norwegians cruise to a 4-0 victory in Oslo, a scoreline that means they have now scored 10 goals in their last 3 Nations League games.

Scotland set themselves up for a date with history on Thursday night as they beat Israel on penalties to set up a Euro 2020 playoff final against Serbia. A game with more than a couple of excellent chances for the both sides dragged on through 120 minutes without either team able to break the deadlock. But it was penalties that ultimately decided the outcome with David Marshall in goal and Kenny McLean from the spot acting as the Tartan Army’s heroes for the night. Victory against Serbia in November will take them to next year’s Euros and Scotland’s first major international competition since 1998.

There was also penalty shoot-out success for Northern Ireland who held Bosnia and Herzegovina to a 1-1 draw in Sarajevo courtesy of a determined finish from Niall McGinn and some heroics from Bailey Peacock-Farrell in goal. But despite playing in front of a home crowd in the Bosnian capital, the pressure was evident on the hosts as they missed two penalties. There was a heart in mouth moment for George Saville who sent his penalty flying over the bar, but composed finishes from Conor Washington and Liam Boyce was all that was needed for the Green and White Army to go marching on to the brink of a consecutive appearance at the European Championships. In order to grab a spot in the finals, they will have to bypass Slovakia in their playoff final in November after the central European side beat the Republic of Ireland in Bratislava on Thursday night.

The Republic’s loss will have left them feeling deeply disappointed given the strength of their line up. A side full of Premier League experience and class would have been expected to find a way past the Slovakians, but it was not to be as the game went down to yet another penalty shootout. Four perfect spot kicks from the home side and two misses from Alan Browne and Matt Doherty were all that separated the two teams on the night.

On Sunday, plans jointly devised by Liverpool and Manchester United were released that proposed drastic and seismic changes to how football in England would operate. The changes suggested by Liverpool and Manchester United would see the Premier League cut to 18 teams with the Championship, League One and League Two hosting 24-teams each, the League Cup and Community Shield scrapped, parachute payments for relegated sides ended and special voting rights for those with extended stays in the Premier League. These proposals were put forward in return of a £250 million bailout for those teams in the EFL, the majority of which have been hit the hardest by the impacts of COVID-19.

Clubs outside the Premier League have been calling for financial support for several months now to help make up for the enormous losses they have incurred since fans have been unable to enter stadiums. But these calls have grown louder in recent weeks following the descent of yet another side into administration, this time Macclesfield Town. But to many, Liverpool and United’s proposals are not acts of charity, but a thinly veiled power grab that would ring-fence the wealthiest and most powerful teams in England. They feel the changes would give those sides regularly at the top of the Premier League table priority in key decision making, closing off any opportunity for upward mobility for the teams below them in the footballing pyramid. The Premier League the Government have been vocal in their opposition to these changes, rejecting the changes and voicing concerns about what the further elevation of power to those at the top would do for football in the UK. The EFL, however, have given the plans their support, perhaps as a sign of the desperation the clubs within the organisation now find themselves in.

The longer term consequences of these changes could have wrought on the wider European scene would also have been enormous. With fewer domestic games to compete in, the so-called ‘big six’ would have more time to play Champions League matches and potentially even lucrative European friendlies. Internationally staged domestic fixtures would also be an option that could have well been on the table, something that has already been happening in La Liga for several seasons now.

In all, it has left many worrying that the establishment of a European Super League is just around the corner. While these plans have been rejected, the intentions of these teams at the top have now been laid bare for all to see. With further social restrictions likely to be imposed nationally, the turmoil and uncertainty for teams outside of the elite is set to continue, meaning that the bargaining position for those at the top is only set to improve. The EFL is undoubtedly a vitally important asset to the national game, indeed 9 of England’s starting 11 on Thursday night started their careers in the lower leagues. But at what cost will those teams outside the Premier League be guaranteed their safety?

“Already very divisive and potentially seismic.
My @BBCNews at 10 analysis live from Old Trafford on the radical Premier League restructure plan that has provoked a fierce backlash.
A power-grab disguised as a rescue-package for the desperate EFL? Or does it have some merit? pic.twitter.com/LWEus7ji41