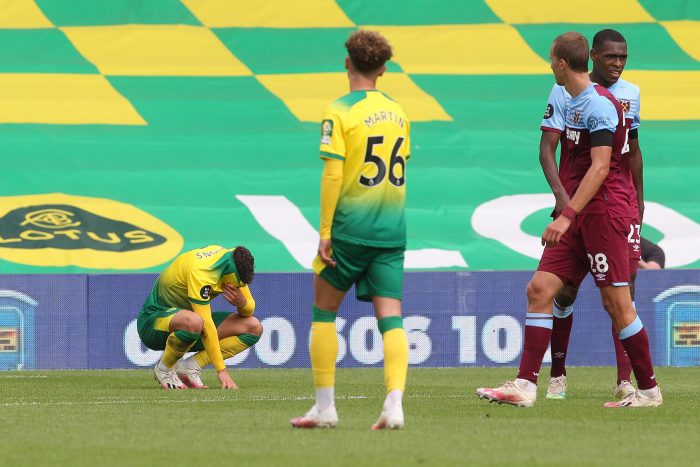 It was one of the stories of the season when it was first announced, but Manchester City’s 2-year ban on European football has been overturned by the Court of Arbitration for Sport (CAS). City’s response to UEFA’s ruling was to immediately appeal it and today’s verdict will leave them feeling vindicated.

The ban was imposed after City were found to have inflated the value of their sponsorship deals with certain companies, a serious violation of Financial Fair Play rules (FPP). As a result, City were banned from all European competitions for 2 years, a ruling which would have had enormous implications on the future of the club.

But in a statement released this morning, UEFA announced “that the CAS panel found that there was insufficient conclusive evidence to uphold all of the CFCB’s [UEFA’s independent financial regulatory body] conclusions in this specific case and that many of the alleged breaches were time-barred due to the 5 year time period foreseen in the UEFA regulations.” In addition, City’s initial fine of €30 million has been reduced to €10 million, which relates to their lack of cooperation with UEFA’s initial investigation.

As the announcement drew nearer, rumours reached a fever pitch about the future’s of manager Pep Guardiola and star midfielder Kevin de Bruyne. Guardiola said he would honour his contract with the club, but de Bruyne announced back in May that he would consider his future should the ban be upheld. The confirmation of City’s short term future in Europe should, therefore, add clarity to their long term future as a global footballing behemoth.

The announcement also has huge implications for the Premier League. Were City to be banned from Europe then the final Champions League spot would have moved down a spot in 5th place. As such, both the Champions League and Europa League qualification places remain as they were, meaning the race for Europe loses a lot of it’s edge. It now means Arsenal and Spurs, who would have been quietly hoping for the ban to be upheld, face an uphill task to qualify for the Europa League, whereas Sheffield United find themselves just a point off the pace. With the major European competitions still to be played out in August, a spare spot could still yet be made available should Wolves or Manchester United clinch Champions League qualification by winning the Europa League. But the one thing that is for certain is that City will once again be contesting the Champions League next season.

Man City are allowed to compete in next season's Champions League after the Court of Arbitration for Sport ruled to lift the two-year ban previously imposed.

The club will have to pay a €9m fine. pic.twitter.com/G1Gl5zmYSs

It was a busy week in the Premier League and the key takeaway over the last seven days was the relegation of Norwich City following their 4-0 defeat at the hands of fellow strugglers, West Ham. There had been a glimmer of hope for the Canaries after their 1-0 win against Leicester before lockdown, but they have been awful since the season restart, losing all seven games by an aggregate score of 15-1. The club hierarchy will not be phased by this season’s disappointing showing, however, using the money garnered from lucrative sponsorship deals and inevitable player sales to continue their modest growth with Daniel Farke expected to remain at the helm. Nonetheless, there were those who wished the Canaries had gone down with a bit more fight. “I haven’t seen grit and determination from Norwich in a long time,” said former Norwich striker Dion Dublin on BBC Radio 5 Live, “winning and playing well and being proud of your performance is incredibly hard work. I didn’t see enough of that from Norwich players.”

Elsewhere in the league, it was a huge weekend for the four other relegation threatened sides who all recorded wins this weekend. 16th placed West Ham’s thumping win at Norwich and 17th placed Watford’s tight win against Newcastle would have seen the move away from the drop zone had it not been for both Bournemouth and Aston Villa also picking up points. Bournemouth’s win was perhaps the biggest shock of the weekend, with the Cherries hammering Champions League chasing Leicester 4-1 at the Vitality Stadium. Leicester initially took the lead after Jamie Vardy bundled the ball over the line after 23 minutes, but a crazy second half took the game away from the Foxes. It was 45 minutes of calamitous defending from Leicester that opened the door for Bournemouth to boost their survival hopes, with Dominic Solanke scoring twice in the process to end his 39 game run without a Premier League goal.

Villa fared similarly against a Crystal Palace side who have largely given in after reaching the magic 40 point mark. Palace should have had the lead after 7 minutes, but Mamadou Sakho’s goal was ruled out by VAR for handball after the ball was seen to go in off his shoulder. Villa wasted no time in taking advantage of their opponents misfortune as Trézéguet bagged a brace to leave Villa 4 points from safety with three games left to play.

It looked like Mamadou Sakho had put the visitors ahead but it's chalked off for a handball – what do you think? ????

At the top of the table, disappointing results for both Leicester and Chelsea have opened the door for Manchester United to clinch a Champions League spot, something that would have seemed unthinkable before the season restart. Chelsea had managed to leapfrog Leicester following their 3-2 win away at Crystal Palace, but their 3-0 loss away to Sheffield United showed nothing of the previous game’s fight. The Blades on the other hand were magnificent. Chris Wilder’s game plan worked to perfection against a Chelsea side who were uninspiring in possession and unconvincing in defence. The game also saw David McGoldrick break his Premier League duck at the age of 32 as the Ireland international bagged a brace.

Wolves also picked up points in their quest for retention of their European status as they swept aside a feeble Everton side 3-0. The win served as a good marker for two sides with lofty ambitions but ultimately poles apart. Everton may have spent a huge amount on transfers in recent years and have one of the world’s best managers at the helm, but their measly 2 shots on target at Molineux is testament to the distance they need to make up. Wolves, on the other hand, were in glorious form. Back to back defeats at the hands of Arsenal and Sheffield United had left them off the pace for Europe, but this win puts them back into contention. They sit in sixth place, just 3 points behind Manchester United but, with the Red Devils hosting Southampton later this evening, that gap could well be extended.

Meanwhile, there was the small matter of the North London Derby as Spurs hosted Arsenal at their new stadium for the first time in the Premier League. It was an enthralling first half, with Spurs looking to cast off the ghosts of their pitiful performance against Bournemouth earlier in the week. But it was Arsenal who struck first courtesy of an Alaxandre Lacazette rocket into the top corner. Less than five minutes later, however, typically Arsenal defending gave Spurs a route back into the game. Sead Kolasinac’s pass back to David Luiz was played in behind the Brazilian, giving Hueng-Min Son the chance to pounce on the ball and chip it over the onrushing Emiliano Martinez in goal. Arsenal looked the most likely to get something from the as the match wore on, with Pierre-Emerick Aubameyang hitting the woodwork in the second half. But Toby Alderweireld’s headed goal from a corner in the 81st minute proved to be the decisive act in what was a typical Jose Mourinho performance.

This week also saw the sad passing of one of football’s great characters, Jack Charlton. ‘Big Jack’, as he was fondly known, was an enormous figure in the game both at home and abroad, and his death was marked with a minutes silence across all Premier League and Championship games this weekend.

As one of the key players in England’s only World Cup victory in 1966, the Northumberland-born centre half holds a special place in the hearts of all English football fans. He spent his entire playing career at Leeds United, winning the league title in 1968-69 as well as the FA Cup in 1972 under manager Don Revie, racking up 773 appearances for the club in the process. He was also brother to the equally legendary Bobby Charlton, whose goals for England and Manchester United marked him out as a giant of the game in his own right.

He is perhaps most well remembered for his managerial career, enjoying success at Middlebrough, Sheffield Wednesday and Newcastle United before being appointed as Republic of Ireland coach in 1986. During a particularly dark period in Irish history, Charlton guided Irish football to heights previously thought impossible. After giving a glimpse of what was to come at the European Championships in 1988, he took Ireland all the way to the quarter finals of the World Cup in Italy in 1990. What is most impressive is he did this after navigating a group that included both England and the Netherlands.

He took Ireland to the last 16 in the following World Cup in 1994 in the USA, beating eventual finalists Italy along the way. Such was the esteem that Ireland held in him that he was granted freedom of the city of Dublin later that year and honorary citizenship of Ireland in 1996, the highest civilian award the Republic bestows.

After leaving management in 1996 Charlton reinvented himself as a TV pundit. As charming as  he was skilful, Charlton provided us all a lasting reminder of what set himself apart from the rest. He will be remembered as a true legend of the game the world over.

We are devastated by the news that Jack Charlton, a member of our World Cup-winning team of 1966, has passed away.

Our deepest sympathies are with Jack’s family, friends and former clubs. pic.twitter.com/eSGjbOpo7Y