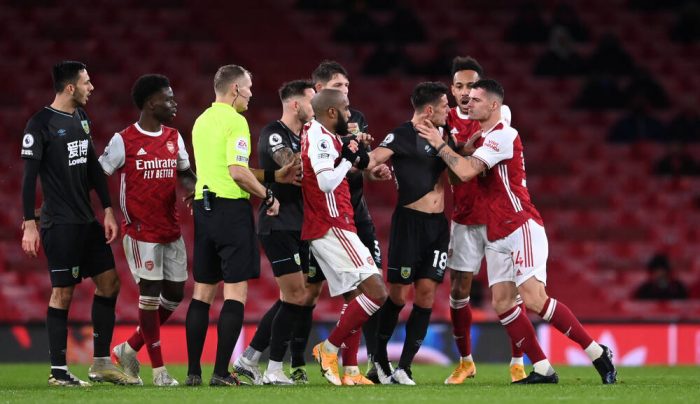 Arsenal had been enduring their worst campaign since 1981 when they went into their game against second from bottom Burnley, looking to pick up their first points since the 0-0 draw with Leeds on 22nd November. But their wait for a first league win in six was made to go on as they slumped to a dismal home loss to the Clarets, their first game in front of the Arsenal faithful since March.

Despite a somewhat more positive approach from the Gunners than we’ve seen in recent weeks, they couldn’t find the breakthrough in the first half. Instead, the turning point in the game came in the second as Granit Xhaka was sent off for violent conduct, attempting to hold Ashley Westwood by the neck in an on-field melee. The incident was so bad, that Mikel Arteta referred to it as “even worse” than the red card Nicolas Pepe received for his headbutt in Arsenal’s draw with Leeds.

16 minutes later and Arsenal were behind through an own-goal from captain Pierre Emerick Aubameyang, who has still yet to score since Arsenal’s 1-0 win at Old Trafford on the first day of November. The loss now leaves the Gunners in 15th place and means that they are now suffering their worst loss since 1974-75. Burnley, however, now have two wins under their belt this season and move out of the relegation zone with a point difference between them and Fulham.

Granit Xhaka has now received 40 cards in the Premier League since joining Arsenal:

Oriol Romeu is the only player with more in total in that time. pic.twitter.com/N8QrLC3f4s

Elsewhere in the Premier League this weekend, the champions Liverpool were held to a well-earned draw by Fulham at Craven Cottage. Fulham were full of invention and drive in what looked on paper to be an easy win for the Reds, and they were given their due rewards as Bobby Decordova-Reid fired home a stylish right-footed drive on the 25th minute. Liverpool found their way back into the game in the second half, however, as a Mohammed Salah penalty earned them a point in West London.

Leicester and Southampton continued their impressive starts to the season on Sunday as they both claimed 3-0 victories at home. Southampton piled the misery onto Sheffield United as goals from Che Adams, Stuart Armstrong and Nathan Redmond consigned the Blades to their 11th loss from 12 games, leaving them 5 points adrift at the bottom of the table. In the later kick-off, Leicester reignited their title hopes with a convincing win over Brighton. All of the Foxes goals came in the first half, with the pick of the bunch being James Maddison’s sumptuous guided effort just before half-time. The win now moves Leicester up to 3rd in the table, just a point off Spurs in top spot.

Saturday’s action was decidedly more pedestrian in comparison to Sunday’s offering. Nonetheless, there was still a landmark win for Carlo Ancelotti’s Everton who overcame his former employers, Chelsea, 1-0 at Goodison Park. Aston Villa also returned to winning ways as they overcame local rivals, Wolves, courtesy of a 94th minute Anwar El Ghazi penalty. But what was supposed to be the highlight of this weekend’s action, the Manchester Derby, was in fact underwhelming as United and City played out a depressing 0-0 draw at Old Trafford.

Southampton are flying this season 👏 pic.twitter.com/bG4RBWOvtF

On Sunday, Borussia Dortmund parted company with manager Lucien Favre following their humiliating 5-1 home loss at the hands of Stuttgart. It was Dortmund’s 3rd league loss in 5 and now leaves them in 5th place, 6 points off league leaders Bayer Leverkusen.

Former assistant coach, Edin Terzic and youth team coaches, Sebastian Geppert and Otto Addo have been brought in to steady the ship until the end of the season, but there is already plenty of speculation regarding Favre’s replacement. Many want the current Borussia Monchengladbach manager, Marco Rose, to take charge of Der BVB following the Foals’ 4th placed finish and qualification for the Champions League last season.

But any change in management in North Rhine-Westphalia is only likely to happen at the end of this season with Rose remaining committed to the targets Gladbach have set themselves this season. Options like Ralf Rangnick, however, remain the more likely choices if Dortmund need a more immediate replacement.

Ultimately, Favre’s downfall was the result of inconsistencies as his Dortmund side earned as many impressive wins as they did underwhelming losses. This is undoubtedly one of the most talented Dortmund sides we’ve seen for a very long time, with Erling Haaland alone scoring an astonishing 33 goals in 32 games for Die Schwarzgelben. But with no trophies to show for their efforts and qualification for next season’s Champions League in doubt, changes had to be made.

The club would like to thank Lucien for his dedication and wish him success in his future. pic.twitter.com/eOxSY1w9RY

Barca and Real in Recovery?

Normality was somewhat resumed in Spain this week as Real Madrid and Barcelona both earned victories in La Liga. Real Madrid had been going through the month from hell until their midweek victory over Borussia Monchengladbach in the Champions League, and they maintained that form in their league performances, beating local rivals Atletico Madrid 2-0 at the Estadio Alfredo Di Stefano. Despite their great start to the season, Atleti could not hold out against a Real side who came into this game with something to prove.

A headed goal from Casemiro in the 15th minute was the perfect start for Los Blancos, giving them the platform to go on the hunt for more. And in the 63rd minute, that’s exactly what they did. A loose ball found Dani Carvajal on the edge of the box whose thunderous effort cannoned in off the back of Jan Oblak in goal, earning the unfortunate Slovenian an own goal. That win now moves Real into 3rd, 3 points behind joint league leaders Atleti and Real Sociedad.

Barca got their first win in 3 this weekend as they overcame a resilient Levante side 1-0 at the Camp Nou. Despite a glut of chances for the Blaugranes — 24 to be exact — it was a single goal that proved to be the difference between the sides. As per usual, it was Lionel Messi who came to Barca’s rescue, winning the game with a fine cross-goal finish that stylishly went in off the post. The win sees Barca move up the table to 8th, just 1 point outside the Europa League spots. Levante, meanwhile remain in the bottom three with a 2 point deficit between them and safety.