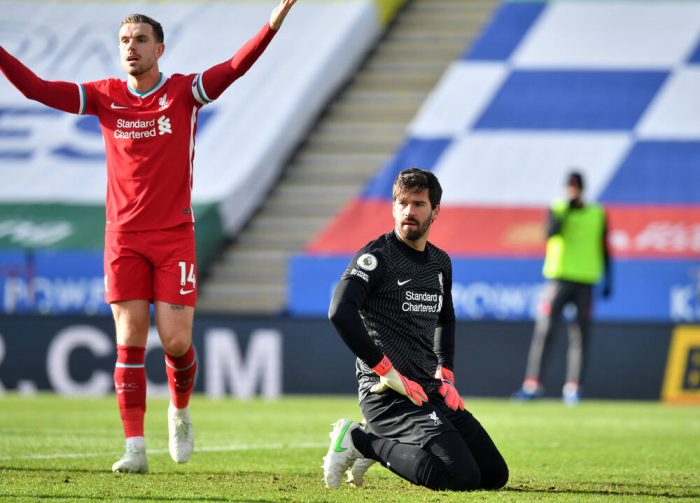 If Liverpool harboured any hopes of retaining the Premier League title before this weekend, they surely waved them goodbye after they lost 3-1 to Leicester at The King Power. Despite taking the lead midway through the second half via a superb goal from Mohamed Salah, Liverpool were once again short on intensity and desire. They were made to pay for their deficiencies, conceding three goals in seven minutes to slump to their third loss in four games.

The first was a clever free-kick from James Maddison, who somehow managed to avoid every player in the box with his tight-angled finish. The second, however, epitomised everything that is going wrong at Liverpool right now. Goalkeeper Alisson was once again mired in a mistake as he failed to communicate with new centre-back, Ozan Kabak, as he went to claim the ball. The Brazilian stopper crashed into the Turkish debutant, spinning the ball out into the path of Jamie Vardy who simply had to pass the ball into an empty net. Harvey Barnes finished the game off for the Foxes, capitalising on some schoolboy defending from Liverpool by slotting home his eighth goal of the season.

The win puts Leicester right back in contention for the title, with Brendan Rogers side now level with Manchester United and just seven points behind leaders Manchester City. Liverpool, however, may be just one place behind Leicester in the table, but the yawning chasm of thirteen points between them and City shows just how much Jorgen Klopp’s men have dropped off this season. The priority for this campaign now rests solely on Champions League qualification, but with Chelsea and West Ham now just a single point behind them, they must arrest their form quickly.

Later on Saturday, Manchester City reaffirmed their title credentials by beating Tottenham 3-0 in a convincing display at The Etihad. Despite Gabriel Jesus leading the line, it was midfielder İlkay Gündoğan who once again provided the goals. A nervy looking penalty from Rodri gave the hosts the lead in the 23rd minute, before two fine goals from City’s man in form settled the win, bringing his total for the season up to 11.

Spurs will be disappointed with the result, but not surprised. Despite a team studded with star power, they rarely threatened the City goal. And combined with the five goals conceded in their midweek FA Cup loss to Everton, this result has set an unwanted record for Jose Mourinho — the most he has conceded over two games as a manager.

There was also a surprising win for Burnley who travelled to Selhurst Park, beating a flat Crystal Palace side 3-0. The Clarets had a two-goal lead within the first 10 minutes, with an instinctive finish from Jóhann Berg Guðmundsson and a close-range header by Jay Rodriguez. The game was sealed just moments after the restart, however, by arguably the goal of the weekend. Matt Lowton drove at the Patrick van Aanholt, pushing him aside before laying the ball off to Rodriguez on the edge of the box. The former West Brom forward then clipped a first-time ball over the top of the defence, back into the path of Lowton who fired an incredible volley past Vincente Guaita. The win keeps Burnley eight points away from the drop zone, while Palace remain in a safe but unadventurous 14th.

Fulham gave substance to their survival hopes this weekend as they beat Everton 2-0 at Goodison Park. Fulham started the game in positive fashion, recording several shots on target but were rewarded with little for their efforts. That all changed in the second half, as deadline day signing Josh Maja scored two poachers efforts on debut. Everton certainly had their moments, with Seamus Coleman hitting the post in the first half, but the hosts were a completely different side to the team who put five past Spurs in midweek.

The win now means that Fulham pull away from West Brom who drew against Manchester United. The Cottagers remain in eighteenth, but with just one loss in five, they are taking some positive form into their fight against relegation. Everton, meanwhile, are on a tricky run. They are only three points behind Liverpool in fourth place but have struggled to record many positive results at home. Only four of their eleven wins this season have come at home, leaving them fourteenth in the home form league table, just ahead of relegation-threatened Burnley, Newcastle and Brighton.

Earlier on Sunday, Pierre-Emerick Aubameyang marked his return to the Arsenal side with a stylish hat-trick in the Gunners’ 4-2 win over Leeds United. Arsenal had the lead within the first 13 minutes after Aubameynang drove at Luke Ayling, before firing home past Illan Meslier in goal. The young French goalkeeper was then at fault for the second and third goals. He conceded a penalty when he fouled Bukayo Saka in an attempt to bring a backpass under control, giving  Aubameyang an opportunity that he duly put away. He then left his near post hopelessly exposed as a flowing move reminiscent of Arsenal of old saw Bellerin find just enough space in the box to fire home an assured finish.

The Gunners then added a fourth just two minutes after the restart as Aubameyang headed home Emile Smith Rowe’s flighted cross to record his first hat-trick as an Arsenal player. Leeds put the pressure on Arsenal as the game entered it’s final moments, as a thumping header from Pascal Struijk and a collected finish by Helder Costa pulled two back for the visitors. But it wasn’t enough for Leeds who now slip into 11th — overtaken by Arsenal who move into 10th.

There was a shock result for Manchester United who’s title ambitions were given a serious knock as they drew 1-1 with West Brom. The Red Devils were behind early after Mbaye Diagne nodded West Brom in front after 2 minutes. A stunning volley from Bruno Fernandes just before half time got United back on level terms, but despite Harry Maguire striking the post in the second half, United were lucky not to have lost. Diagne found himself through on goal after managing to work his way past Maguire, and would have made it 2-1 to the Baggies were it not for a heroic David De Gea save. Ole Gunnar Solskjær’s men are still in second, but are now seven points adrift of cross-city rivals Manchester City in first. What’s more, Leicester’s 3-1 hammering of Liverpool moves them level on points with United and with arguably better form going into the tail end of the season.

AC Milan once looked indestructible this season, but a recent wobble in form has seen them lose ground over their opponents. And this week’s shock loss to Spezia saw them give away top spot in the Serie A table for the first time since the middle of October. What will hurt even more is that it is bitter rivals, Inter, who leapfrog them in the standings following their impressive 3-1 win away to Lazio.

After going 15 games unbeaten at the start of the season, Milan have now lost three of their last seven Serie A games, while Inter have been defeated just once in the same period. The title race was given more heat after Juventus’ shock loss to fellow Champions League hopefuls Napoli on Saturday, with a single goal from Lorenzo Isigne proving the difference. Juventus are the reigning champions in Italy, having won the last nine Serie A titles in a row. It is looking increasingly likely that this is the year they will be knocked off their perch, but whether it is Romelua Lukaku’s Inter or Zlatan Ibrahimovic’s AC is yet to be seen.

In Germany, Dortmund were held to a 2-2 draw against Hoffenheim, with a late goal from Erling Haaland saving them from more domestic misery. Leipzig kept the pressure on Bayern Munich who’s 2-1 win reduced the gap between first and second to just four points. But with Bayern returning to league action following their success in the Club World Cup, the pressure is back on Leipzig to maintain their impressive recent form.