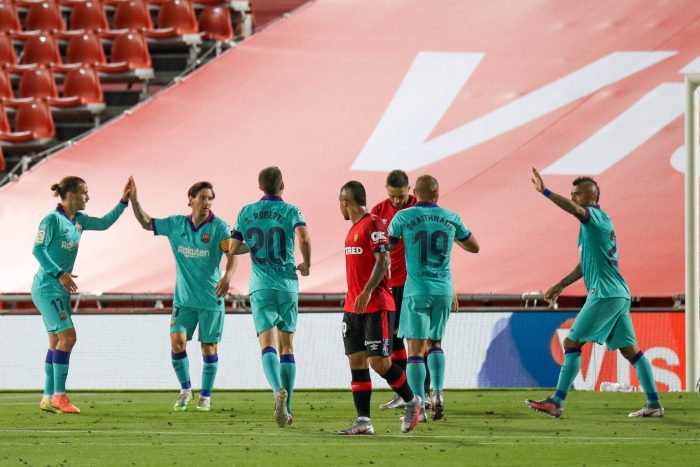 The Spanish La Liga returned on Thursday after 3 months and 1 day away from action. The opening fixture was an entertaining Seville derby that saw Sevilla walk out as 2-0 winners over local rivals, Real Betis, as we all got used to the new artificial atmosphere present at all La Liga games. The real excitement, however, was reserved for the return of Lionel Messi and Barcelona as they continued their efforts to retain the La Liga title with an away fixture at real Mallorca. The Blaugranes set the pace early on with Arturo Vidal scoring within the first 65 seconds. Emergency signing Martin Braithwaite opened his Barcelona account half an hour later rifling in from close range after Messi nodded a loose ball through to him. The diminutive Argentine then picked up a second assist of the game and 14th of the season with a sumptuous first time ball into the path of Jordi Alba who duly converted to make it 3-0, before he claimed a goal of his own in the 93rd minute to round off a convincing 4-0 win for the league leaders.

On Sunday second placed Real Madrid faced off against Eibar, whose rise through the leagues on the most limited of budgets has been one of the stories of European football in recent years. Although threatened with relegation, the Basque club put up a spirited performance against Madrid who are playing their home games at the Estadio Alfredo de Stefano, their home away from home while the Santiago Bernabeu is under refurbishment. Madrid only took 4 minutes to get on the scoresheet, Toni Kroos giving them the lead with a sublime first time finish to lift the ball over the sprawling Marko Dmitrovich in goal. Sergio Ramos made it two on the 30 minute mark as his charge forward from defence was not picked up, allowing Eden Hazard to simply slide the ball across the goal for him to tap in. The pick of the goals came from Madrid’s stalwart left-back, Marcelo, however. Hazard found space on the right hand side of the box firing a shot straight at Dmitrovich, the ball was cleared straight to Marcelo on the left of the penalty area who dispatched a cross-goal finish with the outside of his boot. Eibar gave themselves hope in the second half as a deflected shot squirmed it’s way underneath Thibaut Courtois in goal, but Madrid were able to close the remainder of the game down to remain 2 points behind Barcelona and keep the pressure on the league leaders. =

With the top 2 slots in La Liga seemingly locked down by Barcelona and Real Madrid, the race for the remaining European spots got back up and running over the weekend. Sevilla’s win over Betis solidified their position in third, while Real Sociedad’s 1-1 draw at Osasuna helped bring them into the final Champions League spot. Getafe’s shock loss to Granada on Friday means they slip into the Europa League spots, while Atletico Madrid’s enthralling draw away at Athletic Club means they move down to sixth. 4 points now separate Sevilla and Atletico as the four teams between third and sixth bed themselves in for a scrap to the finish for elite European football.

Sergio Ramos has scored more LaLiga goals than any other Real Madrid player in 2020 (3).

From Madrid with love. ???? pic.twitter.com/XVWP4VkVof

Bayern now one away

Bayern Munich moved within a game of clinching their 8th consecutive Bundesliga title after seeing off a fair challenge from Borussia Mönchengladbach. In what was arguably their most competitive game since the season restart, Bayern were made to go toe-to-toe with a Mönchengladbach side who have played with enormous confidence and style this season. It was in fact Mönchengladbach who nearly had the lead early on, only for Jonas Hofmann’s goal to be ruled offside by VAR. A moment of madness gave Bayern their first goal of the game, however, as Gladbach’s veteran keeper Jans Sommer failed to pull off a reverse pass in his own box, giving Joshua Zirkzee the opportunity to pass the ball into an empty net. Gladbach were back in it 10 minutes later, however, as Patrick Herrmann’s teasing right wing cross caused Benjamin Pavard to poke home an avoidable own goal. The even share of possession reflected a game that was fiercely contested by both sides. It wasn’t until the 86th minute that the result was decided as Pavard atoned for his own goal by driving a low ball across the box for Leon Goretzka to nudge home from close range. Gladbach nearly had a chance to equalise late as Lars Stindl came within inches of lobbing Manuel Neuer, but it wasn’t to be. Bayern now travel to Werder Bremen on Tuesday knowing that a win will see them retain their Bundesliga title, while Mönchengladbach are now 1 point behind the Champions League spaces in 5th place.

Werder Bremen gave their hopes of avoiding relegation and maintaining their 39-year stay in the Bundesliga a real boost on Saturday by thrashing bottom side Paderborn 5-1. Davy Klaassen was the difference on the day, scoring a brace and proving why he’s been such a crucial fixture in the Bremen side since his disastrous period at Everton came to an end in 2018. Bremen were given extra hope of clawing their way out of the relegation spots after both Fortuna Düsseldorf and Mainz both lost, allowing them to close the gap to safety to just 3 points. While Bremen hosting Munich on Tuesday, Düsseldorf and Mainz face the stiff challenges of playing Leipzig and Dortmund respectively, meaning that this relegation battle is going to go down to the final 2 gameweeks of the season.

Elsewhere in the Bundesliga the lack of fans was brought into sharp focus as the sheer quality of the top teams shone through. Friday’s game saw RB Leipzig overturn a formidable Hoffenheim outfit courtesy of a 2 minute brace from Dani Olmo. Dortmund left it late against Düsseldorf on Saturday but Haaland’s 11th Bundesliga goal in the 95th minute was enough for them to secure their 5th victory in 6 matches. Finally, Bayer Leverkusen’s 1-1 draw away at Schalke was enough for them to move above Mönchengladbach into 4th.

The lack of fans has become such a huge factor that home victories have become a serious rarity. Bayern and Freiburg recorded the only two home victories in 2 weekends of football, both against Mönchengladbach. This trend raises serious questions for teams at both ends of the table who would normally bank on their partisan crowds to help drive them over the line.

The Premier League’s return is finally upon us and there is a lot still left to play for, the most pressing of which is when Liverpool will finally claim a Premier League title that has become  increasingly inevitable since January. They only need two games to claim the title which means that, given the packed fixture schedule, the league could be won as early as next week at home to Crystal Palace. The Reds are also on course to surpass the record points set by Manchester City in 2018, with only 19 points from the remaining 27 needed for them to make history.

Speaking of Manchester City, Guardiola’s side are still awaiting their fate as the Court of Arbitrations for Sport decides whether or not to overturn the European football ban UEFA imposed on City back in March. Should the ban be upheld, it would not only be a huge moment in European football, it would also have seismic consequences for those below City in the table. With City out of Europe for the foreseeable future, 5th place would become the final Champions League qualification spot. Manchester United currently sit in 5th, but with Wolves only 2 points behind them, their position far from safe. An even more pressing concern for United, however, is Sheffield United who are also only 2 points behind them but with a game in hand. European football would be a truly incredible outcome for a side who were playing League One football 2 year ago, but it wouldn’t be an anomaly given that the Blades have the second best defence in the league behind only Liverpool. Tottenham and Arsenal can also count themselves still in the race for Champions League football, but with the final Europa League spot also potentially dropping down a space, their sights might yet have to be adjusted.

At the foot of the table, the stakes are equally as high. Barring a truly astonishing escape, it’s widely assumed that Norwich will be returning to Championship, with fixtures against Chelsea, Arsenal and Manchester City all within their remaining 9 games. 19th placed Aston Villa are also in serious trouble as they will attempt to offset the worst defensive record in the league in order to retain their Premier League status. In 16th, 17th and 18th places, West Ham, Watford and Bournemouth are all locked together on 27 points and it is hard to decide who relegation will be worse for. Bournemouth have done exceptionally well to have remained in the Premier League since 2015, but dropping down a division could see a huge swathe of their income wiped out. As of figures from 2018-2019, £115,600,000 of their £131,100,000 revenue has come from broadcasting payments alone, the highest percentage in the league. West Ham, however, are guilty of spending around £110,000,000 on transfers last summer and £270,000,000 over the course of the last three years. Combine this with their largely unsuccessful move to the Olympic Stadium and an incredibly dissatisfied fanbase and relegation to the Championship could be disastrous. Watford, however, could pull off the greatest escape for 15 years should they survive. Not since West Brom’s dramatic survival campaign of 2004-2005 has a team been bottom of the table at Christmas and survived. But with their final two games against Manchester City and Arsenal, the worst could still be yet to come for the Hornets.