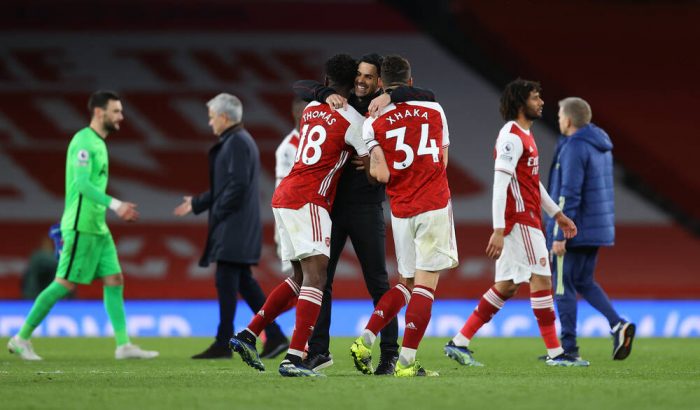 Erik Lamela had a whirlwind afternoon as Arsenal came from behind to beat Spurs in the North London derby. The Argentine forward entered the fray in the nineteenth minute as a replacement for the injured Heung-Min Son and soon grabbed the attention by netting a goal of the season contender. To the astonishment of his teammates, Lamela slid in a sumptuous rabona that nutmegged Thomas Partey en route to beating Bernd Leno at the far post.

Having twice been frustrated by the woodwork, Arsenal eventually levelled matters in the 44th minute through a deflected strike from Martin Ødegaard. The on-loan Real Madrid man swept home from thirteen yards after some excellent work by Kieran Tierney down the left flank. The game was then turned on its head in the 64th minute when Michael Oliver awarded the Gunners a penalty after Alexandre Lacazette was brought down by Davinson Sanchez. The Frenchman then converted the spot-kick himself, sending Hugo Lloris the wrong way before guiding the ball expertly into the side netting.

Just under an hour after entering the field, Lamela was making the walk back down the tunnel. The Spurs goalscorer picked up two yellow cards in the space of seven second-half minutes — the second of which was awarded for a stray forearm striking the face of Kieran Tierney.

Despite Arsenal’s man advantage, Spurs rallied around captain Harry Kane’s efforts as the North London derby’s all-time top scorer tried his best to extend his record. But a disallowed headed goal and a free-kick that struck the frame of the Arsenal goal were as close as the Lillywhites would come to levelling the scores. It was an important win for boss Mikel Arteta and another step on the road to salvaging a season that suffered a disastrous start.

Earlier on Sunday Sheffield United sunk to a new low after suffering the heaviest defeat in their Premier League history as they were soundly beaten 5-0 by Leicester City. Kelechi Iheanacho was the Blades’ tormentor in chief as the Nigerian striker netted the first Premier League hat-trick of his career. Strike partner, Jamie Vardy, teed up the former Manchester City man for two one-touch finishes before Iheanacho rounded off his tally with a fine near-post strike from 25 yards. Ayoze Perez also found the back of the net whilst Ethan Ampadu compounded his side’s misery by turning another of Vardy’s square balls into his own net in the 80th minute. Now fourteen points adrift of safety and without recently departed boss Chris Wilder at the helm, the Blades look set to be the first side to drop out of the top flight this season.

Sunday also saw important wins at both ends of the table for Brighton and Manchester United, respectively. The Seagulls finally broke their expected goals curse and ran out 2-1 winners over south coast rivals Southampton, whilst United edged out West Ham 1-0 at Old Trafford thanks to an own-goal from Hammers defender Craig Dawson.

50 – Kelechi Iheanacho has been directly involved in 50 goals in 76 starts across Leicester and Manchester City, scoring 36 and providing 14 assists. Product. pic.twitter.com/QeeK22zwlf

Pep Guardiola’s Manchester City side moved to within five wins of reclaiming the Premier League title with a 3-0 win over relegation-threatened Fulham at Craven Cottage. It all unravelled pretty quickly for the Cottagers as City struck three goals in thirteen second-half minutes including Sergio Aguero’s first Premier League goal in over a year. The Argentinian striker added City’s third from the penalty spot in the 60th minute and the strike ended a long wait for the injury-hit frontman, whose last league goal came in a 1-0 win over Sheffield United back in January 2020. Fulham boss, Scott Parker, won’t have been expecting much from the game but he’ll rue his side’s self-destructive tendencies. Errors from Ivan Cavaleiro and Tosin Adarabioyo led directly to City’s second and third goals and the loss leaves the Cottagers two points adrift of safety going into the final nine games of the season.

Elsewhere, Crystal Palace all but secured their top-flight status for another season after a 1-0 win over former boss Sam Allardyce and his West Brom side who remain ten points from safety. Allardyce’s former club, Newcastle, are also looking down the barrel of a difficult end to the season. Despite a 94th minute Jamaal Lascelles equaliser in their 1-1 draw with Aston Villa on Friday night, the mood on Tyneside has not lightened as the Magpies remain perilously close to the drop zone.

Saturday’s action kicked-off with a battle between two old rivals as Chelsea travelled north to take on Leeds at Elland Road for the first time in the league since 2004. The game promised much but ended goalless as the woodwork denied both sides and goalkeepers Ilan Meslier and Edouard Mendy pulled off a string of fine saves.

And finally, Burnley put some distance between themselves and the relegation zone as goals from Chris Wood and a stunning curling effort from Dwight McNeil gave the Clarets only a second away win over Everton in 45 years. The win continued The Toffees’ home woes with Carlo Ancelotti’s side now only winning one of their last seven matches on home turf, losing four of the last five.

Cristiano Ronaldo went some way to burying Juventus’ Champions League woes in what was a milestone occasion for the Portuguese forward. A perfect hat-trick in twenty-two first-half minutes saw Ronaldo surpass Brazilian legend Pelé’s record of 767 career goals, whilst taking his own tally to an incredible 770 in Juventus’ win over Cagliari. The goalscoring feat began in typical Ronaldo fashion as the forward rose above the Cagliari defence to turn home a trademark towering header. A right-footed spot-kick doubled Juve’s lead and within seven minutes Ronaldo had completed the 57th hat-trick of his career after lashing a left-footed effort into the back of Alessio Cragno’s net. Despite the win, Juve remain ten points behind league-leaders Inter Milan, who extended their lead at the top over rivals AC Milan to nine points with a 2-1 win over Torino.

In Germany, RB Leipzig lost ground in the title race as they could only draw 1-1 with Champions League chasers Eintracht Frankfurt. Joint-top scorer Emil Forsberg put Leipzig ahead after Justin Kluivert’s dipping long-range effort was too hot to handle for Eintracht stopper Kevin Trapp. But Julian Nagelsmann’s side weren’t in-front for long, as Daichi Kamada’s weakly struck volley managed to find a way past Peter Gulasci and into the Leipzig net via the post.

Robert Lewandowski scored his 32nd Bundesliga goal of the season as Bayern gave themselves some breathing room over Leipzig with a 3-1 win over Werder Bremen at the Weser-Stadion. The Polish striker tapped in Bayern’s third and the strike drew him level with Klaus Fischer in second-place in the all-time Bundesliga top scorers list.

In Spain, Real Madrid narrowed the gap on city-rivals Atletico Madrid at the top of La Liga to six points after two goals from Karim Benzema ensured they avoided a shock home defeat to relegation-threatened Elche. Elche defender Dani Calvo put the away side ahead early in the second-half but Benzema was on hand to level the scores in the 73rd minute. The Frenchman proved Real’s saviour once again when he struck a 91st-minute half-volley from the edge of the box that kissed the post on its way into the back of the net.

Later on Saturday evening on the outskirts of Madrid, Atletico took on Getafe in what was a battle of La Liga’s defensive masters: Jose Bordalas and Diego Simeone. Bordalas will have come away from the game the happier manager as his side managed to frustrate the league leaders and top scorer, Luis Suarez, by holding them to a 0-0 draw despite going down to ten men midway through the second half. With the gap between the top two now just six points and Atletico having to travel to Camp Nou on the season’s penultimate weekend, Zidane and his side have everything to play for.