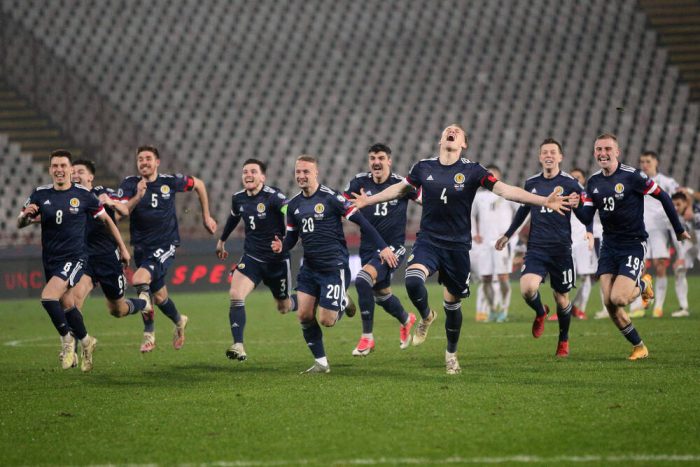 Scotland Qualify for the Euros

In recent years, there has been a definite turnaround in fortunes for the home nations at major tournaments. England reached the semi-finals of the World Cup in 2018, Wales did what many thought was impossible by making the semi-finals of Euro 2016 and Northern Ireland showed their own worth by making it out of the group stages of those same European championships. But despite seeing the recent success of their neighbours, Scotland had been unable to replicate the same quality of momentum, regularly falling at the last in almost all of their qualification games.

That is until Thursday as Scotland finally ended their qualification hoodoo, beating Serbia on penalties in their play-off match to reach the finals of Euro 2020, thus ending a 23-year wait for major tournament action.

The 1998 World Cup in France was the last major tournament Scotland qualified for, an outing that saw them play three games, of which they lost two and drew one, scoring just twice in the space of 270 minutes. But this time things feel a little different. Scotland may not play the most striking style of football, but their ability to grind out results is indicative of a commitment and resolve that has been missing from the Scottish national team for over two decades now.

But despite a solid run of results that has seen them win against Slovakia and the Czech Republic in recent weeks, they went into Thursday night’s game away to Serbia as underdogs. Boasting an enormously talented squad with the likes of Alexsandar Mitrovic, Dusan Tadic and Serge Milinkovic Savic in the starting line-up, it is easy to see why Serbia were so widely tipped to go through. But as Scotland have shown since Steve Clarke took over at the National side in 2019, they are not a side lacking in any belief and proved as much when they took the lead just after half-time through Ryan Christie. As the final whistle approached, the Scots thought they had done enough, only for Real Madrid’s Luka Jovic to score what was only his second goal of the season in the 90th minute, taking the game to extra time. A dull and niggly 30 minutes later, the only thing left to separate the two sides was a penalty shootout.

After nine perfect penalties, it all came down to the final spot-kick as Fulham’s Mitrovic stepped forward knowing that anything less than a perfect strike and Serbia would be out. But despite a decent effort, he could not evade the outstretched glove of David Marshall in goal who, after quickly checking that his save was legal, was engulfed by the wild celebrations of the Scottish players and staff. Great scenes of jubilation from inside the away changing room were soon shared on social media, showing just what the victory meant to this group of players. And with a group stage fixture against England now confirmed for next year’s finals, the renewal of the oldest rivalry in international football is sure to be a lively one. Scotland join North Macedonia, Slovakia and Hungary as one of the final four teams to qualify for next year’s European Championships.

England Out of Nations League

While it was jubilation for Scotland, England’s latest international fixtures were a far more disappointing affair as they missed out on the opportunity to qualify for the finals of the Nations League. Despite a comfortable 3-0 victory against Ireland in a friendly fixture on Thursday, they could not find the same rhythm or incisiveness in front of goal against Belgium on Sunday night. Anything less than a victory for England would have seen the Three Lions sacrifice any hope of finishing top of Group A2 and, therefore, qualification to the finals of the Nations League. But their performance on the night showed none of the urgency required for that to happen.

A dominant showing in terms of possession for England did not readily translate into a night of much attacking intent. Instead, Gareth Southgate’s men set up in his preferred 3-4-3 formation, with two holding midfielders in the shape of Jordan Henderson and Declan Rice sitting in the middle of the park, and set about happily passing the ball around the back to each other’s feet. And with Raheem Sterling and Marcus Rashford both ruled out for the fixture through injury, incisiveness in the wide areas was seriously lacking.

As such, it was two stylish goals from Belgium in the first half that proved to be the difference, as Youri Tielemans’s long-range strike and Dries Mertens’s dipping free-kick gave the Red Devils the win. Perhaps the main positive Southgate can take away from the loss is the performance of Jack Grealish. After months of anger from the fans and media at the England manager’s refusal to play the Villa captain and consistently fine performances for his boyhood West Midlands club, Grealish was finally given his first competitive start for England and showed exactly the sort of drive and intent that has been missing from this team of late.

A restructured formation that features a midfield 3 with Grealish at the heart of it seems to be the next logical step, but we may have to wait a while for such a change to be implemented. Southgate is not a coach likely to bend to the will of public opinion, regularly showing a reluctance to make any drastic changes to his preferred modus operandi. As such, many fan’s dream England formation could well be a way off in the future, but with injuries already mounting up in the shape of Joe Gomez, Jordan Henderson and Ben Chilwell, a reconsidered tactical approach could soon be Southgate’s only option.

"He was the best player on the pitch…

Jamie Redknapp and Ashley Cole were full of praise for Jack Grealish after England's defeat to Belgium.

The current world champions, France, saw off the current European champions and Nations League title holders, Portugal, with a 1-0 win in Lisbon on Saturday night. France’s victory, courtesy of a goal from N’Golo Kante in the 53rd minute, sees them secure top spot of Group A3, thus booking their place at the Nations League finals.

It was a tightly contested affair, despite the differences in form the two sides took into this game. Portugal were riding high from the 7-0 mauling they inflicted on Andorra on Wednesday night, while France were left reeling from a shock 2-0 loss at home to a weakened Finland side. Nonetheless, it was France who came out on top, setting the tone early through some fast-paced and inventive football. But despite creating more early opportunities, it was Rui Patricio who was the difference, making two huge saves from Anthony Martial in the first half.

France did find the breakthrough in the second period, however, and it was Patricio of all people who allowed it happen, fumbling Adrian Rabiot’s shot to give Kante the chance to poke home from just inches out. Portugal pushed for the equaliser late on, but it was to no avail. Hugo Lloris stood tall in the France goal to save brilliantly from Joao Moutinho’s fine long-range effort, while Jose Fonte could only watch his near-perfect headed chance strike the post. Their loss means that 2019’s Nations League winners are now out of the competition and must watch France and Belgium compete against the eventual winners of Groups A1 and A4 to take away their crown.

For France, however, it was not only a welcome return to winning ways but also a chance for one of their most gifted players to leave behind what is fast becoming a toxic club environment. Paul Pogba’s situation at Manchester United had already been commented on by France manager, Didier Deschamps, in recent weeks, but it wasn’t until after their clash with Portugal that Pogba himself made his own feelings known.

“I had never known such a difficult period in my career,” he said speaking to RTL. “I used to play all the time, to have rhythm and suddenly, like that, change…The France team is a breath of fresh air, the group is exceptional, it’s magic.”

His playing time under Ole Gunnar-Solskjaer has not been consistent of late, making just ten appearances for Manchester United this campaign, with only 5 of those coming as a starter. But despite the public outcries from both him and his national team manager, Pogba’s performances for United have not warranted the faith he is demanding. On his day, Pogba is a truly generational talent, seeing passes few others can ever see, while also providing a physical thrust from midfield that few others can match. But his regularly absent performances for a club side in dire need of consistency hasn’t won him many favours with Soslkjaer and, with what could now be the beginnings of his second public spat with United’s management, a move to pastures new could well be on the cards for Pogba.