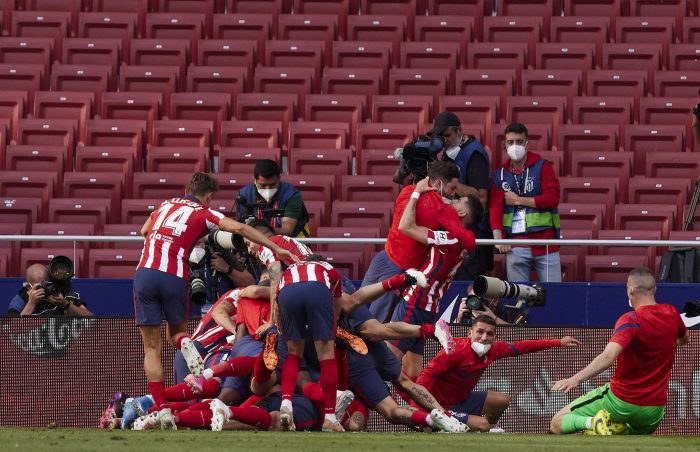 Atleti Just One Win Away

Athletico Madrid are now just one win away from the La Liga title thanks to Luis Suarez’s dramatic winner against Osasuna on Sunday afternoon. Atleti were made to do it the hard way, coming from a goal behind to score twice in the final eight minutes of the game. Having suffered a shock loss to Celta Vigo on Sunday, Barcelona are now out of the running for the titlw which means that only Real Madrid can now stop Diego Simeone’s men from claiming the title.

In Italy, Juventus pulled off an impressive 3-2 win against champions Inter Milan as they look to end a dismal season on somewhat of a high. Goals from Cristiano Ronaldo and Juan Cuadrado sealed the win for the Bianconeri who are now in fifth position, just one point behind AC Milan in the final Champions League spot. Considering how well AC started the season, it would be an unmitigated disaster should they lose out on Champions League qualification on the final day of the season. All attention in Italy will be turned on AC as they take the short trip to Atalanta for their final game of the season on Sunday.

Finally, in Germany, Borussia Dortmund were crowned the DFB-Pokal champions after they beat RB Leipzig 4-1 in Thursday night’s final. Jadon Sancho and Erling Braut Haaland were the stars of the show, with the pair bagging a brace each. The title is Dortmund’s first piece of silverware since they won the competition in 2017, but also the first trophy won by the likes of Haaland, Sancho and Jude Bellingham.

Leicester City won the FA Cup for the first time in their history on Saturday, beating Chelsea 1-0 in the final. The win came courtesy of a stunning strike from Belgian midfielder, Youri Tielemans, whose 25-yard pile driver was the decisive moment in a game watched on by 20,000 spectators.

The game started in a rather restrained fashion as both teams felt each other out, refusing to give too much away. But as the second half began, the shift in Leicester’s mentality was clear as they went after Chelsea with renewed vigour. And they didn’t have to wait long for their rewards when Tieliemans picked up the ball, drove at Chelsea’s backline and thundered a shot past the outstretched hand of Kepa Arrizabalaga.

Chelsea thought they had found a way back into the game when former Leicester man Ben Chilwell somehow got on the end of his own cross to bundle the ball past Kasper Schmeichel in goal. But upon VAR review, the goal was ruled out because he was deemed to have been in an offside position by the barest of margins when Thiago Silva’s initial ball was played.

Chelsea still had more than enough opportunities to get level, but thanks to some truly world-class goalkeeping from stopper Kasper Scheimchel, Leicester were able to keep their noses in front. The pick of Schmeichel’s saves came when Mason Mount fired a fine a half-volley through a crowded penalty area, only for the Danish international to somehow tip it the other side of the post in a display of pure strength and reflex.

Chelsea manager Thomas Tuchel will be understandably disappointed, especially considering that this was his second defeat in the space of a week, losing 1-0 to Arsenal in the league on Wednesday night. For Brendan Rogers and Leicester City, however, the victory is an enormous step forward in their attempts to disrupt the dominance of the so-called ‘Big Six’. What made the victory even more poignant was the presence of Aiyawatt Srivaddhanaprabha, the Leicester City chairman who took over the role following his father’s death in a helicopter crash in 2018. As the party began on the pitch following the final whistle, the Thai businessman could be seen amongst the Leicester squad celebrating alongside them and the coaching staff.

Manchester City claimed their third Premier League title under Pep Guardiola and fifth in total on Tuesday night following Manchester United’s shock loss to Leicester City. City had the chance to claim the title with a win at home to Chelsea last weekend, but Marcos Alonso’s 92nd-minute winner meant that their wait would have to go on just a little longer. Their victory was eventually confirmed with them even kicking a ball, however, when Çağlar Söyüncü’ fired home a thumping header to give Guardiola’s men the title.

City’s win this year is all the more impressive when you consider the depths they had to rise from. In late November, they were languishing in ninth position having just been beaten 2-0 by Jose Mourinho’s Spurs. But ever since then, City have steadily worked their way up the table and after finding top spot on 17th January, they haven’t moved once. All eyes will now be on them as they prepare for the biggest game in their history as they take on Chelsea in the Champions League final in Lisbon on 29th May.

Elsewhere in the Premier League, Liverpool’s goalkeeper Alisson sealed a last-minute win against West Brom when he rose highest from a corner to nod home the decisive goal. The dramatic goal means that Liverpool’s top-four hopes are remarkably still in their own hands. Should Chelsea lose to Leicester when they meet in the Premier League on Tuesday night, then Liverpool will have the chance to go above them by beating Burnley on Wednesday.

There was also a win for Tottenham Hotspur who showed they still have what it takes to finish this season strongly. Their 2-0 win against Wolves at home on Sunday night was their third in four league games under the guidance of Ryan Mason. They now sit in sixth place, ahead of their nearest rivals West Ham on goal difference.