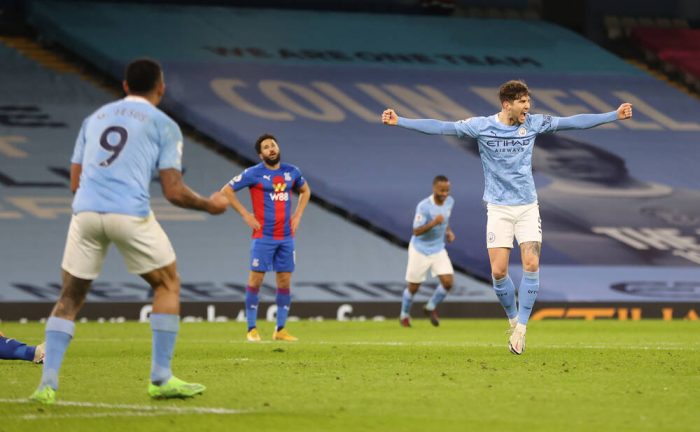 In a display of near-perfect finishing technique, Manchester City kept their title hopes alive by dismantling Crystal Palace 4-0 at The Etihad thanks to goals from İlkay Gündoğan, Raheem Sterling and the first two league goals for John Stones in his four-year City career. The former-Everton defender opened the scoring for the hosts on the 26th minute, getting on the end of a sumptuous outside of the boot cross from Kevin de Bruyne. Gündoğan then doubled City’s lead on the 56-minute mark, wrestling the ball away from Andros Townsend on the edge of the Palace box, before curling a gem of a shot past the hapless Vincente Guaita into the top-right hand corner.

Stones was then on hand to hand to grab his second, demonstrating an uncharacteristic nose for goal as he pounced on a loose ball from a City corner in the 68th minute. Sterling was then able to round off proceedings with a reminder as to why he still remains one of England’s foremost talents, whipping a superb free-kick from the edge of the Palace box into the top corner with just a couple of minutes left on the clock.

The win now moves City up to 2nd in the table, two points off leaders and cross-city rivals, Manchester United. But it is City who hold the best form in the division, winning five league games on the bounce and eight in all competitions. Key to that success has been the strength of their defence which has only conceded twice in that eight-game run, and central to the solidity of that defence has been the renaissance of John Stones at centre-back. Out of the team and in the wilderness for the last two seasons, questions abounded as to the Yorkshireman’s future at the club. But after building a formidable partnership with Rúben Dias at centre back that has kept the £57 million Aymeric Laporte on the bench in recent weeks, there is now talk of a recall to the England set-up for Stones as well as a late surge for the title from City.

Earlier on Sunday, Liverpool hosted Manchester United in what was one of the first top of the table clashes between the two sides in recent memory. Liverpool have blown hot and cold for large parts this season as they adjust to large-scale injury issues across the first-team squad, while United have managed to find the right balance between attack and defence to suit their break-oriented style of football. But despite the high billing, this highly-anticipated North-West derby fell firmly on its face, with neither side finding the breakthrough come the final whistle. United manager Ole Gunnar Solskjær will have been the happier of the two coaches, having left Anfield unbreached and with a point that keeps them just out of reach of Manchester City in second place. But memories of the game will still be tinged with elements of ‘what might have been’ as both Bruno Fernandes and Paul Pogba both had excellent close-range opportunities to win the game were it not for the exceptional goalkeeping of Liverpool’s Brazillian shot-stopper, Alisson.

Sheffield United won their first game of the season on Tuesday, beating Newcastle 1-0 at home, which will have given the Blades renewed hope for a miracle escape from relegation. But if United had any aspirations on scrapping a hard-earned three points out of Tottenham, Mourinho’s men quickly put a stop to them by taking the lead in the first five minutes through Serge Aurier. A few minutes before half time and Spurs had a second, this time courtesy of a fine drilled finish from Harry Kane who now takes his tally up to twelve for the season.

United earned back some pride and hope for a grandstand finish when David McGoldrick flicked home John Fleck’s cross to make it 2-1 on the 59th minute. But three minutes later, Tanguy Ndombele scored what could be one of the goals of the season as he latched onto Steven Bergwijn’s looped forward ball, before lobbing Aaron Ramsdale with the outside of his right boot, all while in the process of losing his balance. The win will sting Sheffield United and Chris Wilder who’s side went toe-to-toe with Spurs for large parts during the game, but they will take what positives they can from the match as they continue their unlikely push for Premier League survival.

It's been 348 minutes since Liverpool last scored in the Premier League ❌ pic.twitter.com/hwKbuJDWd4

Bournemouth have taken well to life back in the Championship following their relegation from the Premier League last season, but on Saturday they suffered what was only their fourth loss of the season to Luton Town. The Cherries were at a disadvantage early on in the match, losing Jefferson Lerma to a questionable red card for accidentally catching Tom Lockyer with his trailing arm. Luton were forced to wait some time to press home their advantage, however, with Kiernan Dewsbury-Hall only curling what would eventually be the winning goal into the far corner in the 67th minute. The win moves Luton up to 12th, while Bournemouth remain in 3rd but with a four-point gap now between them and Swansea in the automatic promotion places.

Swansea were able to open up that gap between them and the side from the south coast with a comfortable 2-0 win away to Barnsley on Saturday evening. Goals from Ben Cabango and Jamal Lowe either side of half time gave the Swans the victory as they aim for a return to the Premier League following their relegation in 2018.

There was also a win for Rotherham United who beat Derby County 1-0 in what was Wayne Rooney’s first game in charge as permanent manager. It was a late winner from Jamie Lindsey that earned the Millers their win against their fellow relegation candidates who are now second-bottom in the table with just 4 wins to their name. Rotherham, however, have two games in hand and the opportunity to claw themselves away from trouble as the second half of the season gets underway.

There was also a win for Nottingham Forest over Millwall on Saturday afternoon who are now unbeaten in their last six league games, with only Brentford in 4th boasting a better recent record than the Reds. Two glorious finishes from Sami Ameobi either side of half time brought the match under the Reds’ control before Ryan Yates settled the game by flicking the ball home at the near post following a corner. The Lions were able to grab a late consolation goal via Ben Thompson’s 89th-minute strike despite the blatant push on Forest keeper Brice Samba that left the 25-year old midfielder with an empty net to shoot into. Nonetheless, the win now moves Forest up to 19th in the table as they continue their late mid-season push away from the relegation zone.

Inter reinvigorated their title aspirations this weekend by beating Juventus 2-0 at the San Siro, their first victory over the Turin side in four years. Goals from the former Juve player Arturo Vidal who won Serie A four times with the club and Federico Chiesa settled the victory for Inter who were by far the more dominant side on the night. The win now moves Inter level on points with cross-city rivals AC Milan, but with a game in hand against Cagliari on Monday night, Stefano Pioli’s side could yet pull away. The result also leaves Juventus in 5th, far below where they would usually expect to be at this stage of the season, and with an uphill battle to challenge for the anything higher up the table.

Elsewhere in Europe, Athletic Bilbao won the Spanish Super Cup after they beat Barcelona 3-2 after extra time. In what was a frenetic game, Barca twice had the lead thanks to Antoine Griezmann only for the Blaugranes to be pegged back twice, first by Óscar de Marcos and then by Asier Villalibre in the final seconds.

Iñaki Williams grabbed the winner in the third minute of extra time, rounding off a remarkable turnaround for the Basque side that sees them win their first trophy since 1985. A win for Barca would have made it 14 Super Cups for the Spanish giants and the first trophy of the Ronald Koeman era, but events in the final moments of extra time overshadowed all other narratives. Blocked off by Villalibre halfway inside the Bilbao half, Lionel Messi swung out in retaliation to send the striker sprawling to the floor. The incident was missed by the referee in real-time, but upon consulting VAR, he had no hesitation to give Messi his third ever red card and first for Barcelona in his 753rd appearance for the club. The incident comes as a shock for many who have become accustomed to Messi’s measured temperament on the pitch, but it is not surprising that frustrations have boiled over for the mercurial Argentinian as he continues to play for a club he attempted to leave just four months previously.