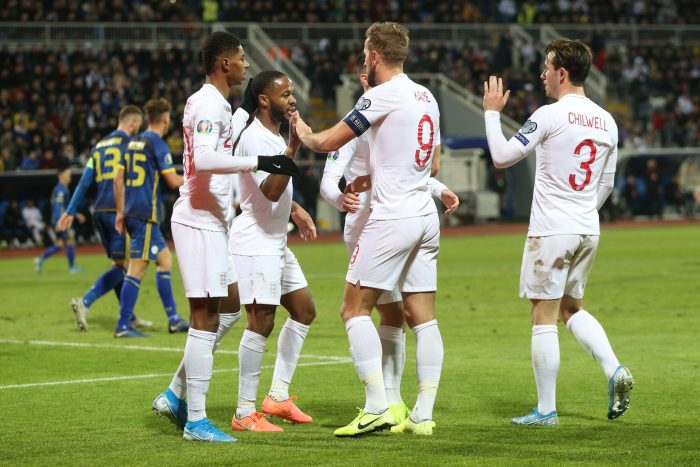 It was a far from an ideal start to the international break for England, with the clash between Raheem Sterling and Joe Gomez sparking a media frenzy. Whereas past England squads have been plagued of stories of divisions caused by club loyalties, Southgate’s spell had up until last Tuesday been fairly serene. The confrontation followed an incident in the previous weekend’s game between Manchester City and Liverpool, and Southgate’s reaction was to drop Sterling for the Montenegro match.

England won that game 7-0, and Southgate’s decision was perhaps made somewhat easier by the fact that the level of opponents meant that England could do without one of their star men. Sterling was brought back into the team for yesterday’s 4-0 win over Kosovo, which England won 4-0.

Southgate was praised by some and criticised by others for his decision to publicly punish Sterling. It’s fair to say the England manager certainly put his stamp on the situation, although the boos from at some England fans when Gomez was introduced against Montenegro left a bad taste in the mouth.

With regards to on-pitch issues, there were positives in that Tammy Abraham, Harry Winks and Mason Mount scored their first senior international goals. Alex Oxlade-Chamberlain started both games and has clearly worked his way back into Southgate’s thinking, while Marcus Rashford also continued his good form of recent weeks. Harry Kane’s four goals from the two games meant he took his total for this season to 20.

However, there are still concerns for Southgate. The three late goals somewhat flattered what wasn’t a particularly convincing showing against Kosovo, who dominated the midfield at times during the second half. Callum Hudson-Odoi failed to impress, proving wasteful in possession before being hooked just before the hour mark. The defence also still does not look assured as it should be, and the fact that the centre-back spot next to Harry Maguire is still up for grabs isn’t ideal.

Overall, it’s been a satisfactory qualification campaign. On the plus side, there have been plenty of goals and strong attacking play. With Harry Kane, Raheem Sterling, Marcus Rashford and Jadon Sancho at his disposal, Gareth Southgate will have one of Europe’s strongest attacks at his disposal next summer.

On the other hand, the midfield and central defence don’t look particularly strong, and it still seems as if Southgate is some way from knowing his strongest XI. England will go into EURO 2020 as one of the top six seeds, but there is plenty of work to be done if they are to be genuine contenders.

Wales went into Saturday’s match against Azerbaijan needing a win to stay in with a chance of automatic promotion, and Ryan Giggs’ side got what they needed. Goals from Kieffer Moore and Harry Wilson secured what turned out to be a relatively comfortable 2-0 win. Wales have endured a difficult campaign since Giggs took over, but they’ve improved in recent months and now seem to have a clearer on-pitch plan. The victory sets up a winner-takes-all match against Hungary on Tuesday to decide who will join group winners Croatia at EURO 2020.

Northern Ireland had a somewhat more difficult task on their hands against the Netherlands, with Michael O’Neil’s side needing a win and a clean sheet to go through. They came extremely close, the game finishing 0-0, and will be bitterly disappointed not to have won considering Steven Davis skied a first-half penalty over the bar. The draw means the Netherlands reach their first major tournament since the 2014 World Cup, while Northern Ireland settle for a place in the play-offs.

Like Wales, the Republic of Ireland face a winner-takes-all game against Denmark at the Aviva Stadium tonight. Denmark currently sit top with 15 points, with Switzerland a point behind in second. Ireland are third with 12 points, and the head-to-head rule means a win will be enough. The Irish managed a 1-1 draw in the away leg, but tonight’s game promises to be a tough one. The wounds from the 5-1 loss in the 2016 World Cup play-off are still fresh in the memory, and while that will provide the Irish with plenty of extra motivation, they will also be wary of another humiliation at the hands of the Danish. It promises to be a tense affair.

Still, Ireland will get another chance in the play-offs if things don’t go their way tonight. The same goes for Scotland, who have endured a pretty torrid campaign but moved third in their group courtesy of a 2-1 win over Cyprus on Saturday.

Last week’s international fixtures saw more teams confirm their place at next summer’s EURO finals. Turkey’s 0-0 draw against Iceland ensured that both they and France qualified, with the French finishing as group winners. Iceland, who knocked England out of the 2016 tournament, finished third and will be in the play-offs.

Current EURO holders Portugal also booked their spot, first demolishing Lithuania 6-0 and then beating Luxembourg 2-0 away from home. Cristiano Ronaldo’s four strikes across the two games mean he is just one away from his 100th international goal. Portugal finish second behind Ukraine, Andriy Shevchenko’s side topping the group with an impressive 20 points from eight games. Third-place Serbia are one of the stronger teams heading for the play-offs.

Elsewhere, Finland reached their first ever major tournament as a Teemu Pukki brace helped them to a 3-0 win over Liechtenstein. Sweden’s 2-0 win over Romania meant they finished second in their group behind Spain and will be at EURO 2020, while Czech Republic qualified as group runners-up behind England after beating Kosovo 2-1.