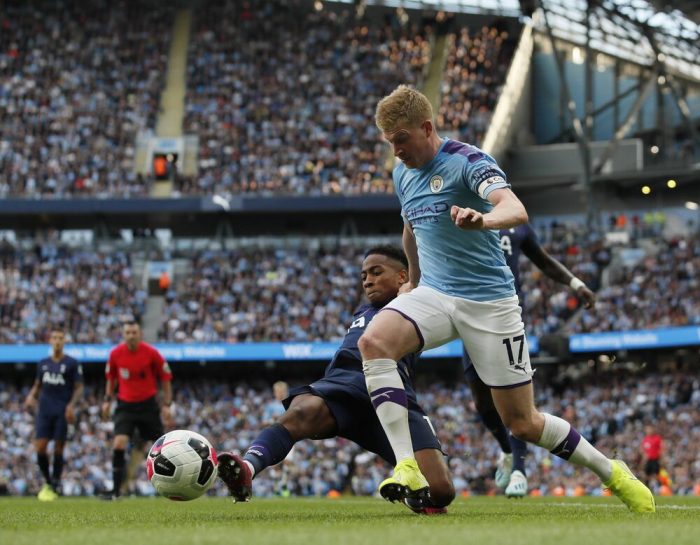 This weekend saw league champions Man City, Barcelona, Bayern Munich and PSG all fail to win – the first weekend these four have played and not won since April 2014. City were held 2-2 by Spurs after having a late goal ruled out, while Barca limped to a surprising 1-0 away loss to Athletic Bilbao in the absence of Leo Messi. Bayern Munich could only draw 2-2 to Hertha Berlin and Ligue 1 champions PSG fell to a 2-1 defeat to Rennes.

While City and PSG remain favourites to win their respective leagues, the other results exemplified current concerns surrounding Barca and Bayern. Barca looked bereft of ideas without Messi, and with Suarez getting injured it was probably their worst opening day for ten years – the time since they last lost.

Atletico Madrid have spent heavily this summer and bought in the huge talents of Joao Felix, and they look like they could give Barca a real run for their money. Diego Simeone’s side picked up a 1-0 victory over Getafe and will hope to end Barca’s dominance this season. Real Madrid also allayed fears following a turbulent summer by beating Celta Vigo 3-1, which shows just how fast the pendulum can swing in La Liga.

Meanwhile, Bayern’s poor start has compounded fears generated by an underwhelming transfer window, which has seen the club miss out on key target Leroy Sane. They already lost the German Super Cup to last season’s Bundesliga runners-up Borussia Dortmund, and the challengers followed up that victory with an emphatic 5-1 opening day win over Augsburg. Still early days, but Dortmund invested wisely in the summer and look a good bet to go one better this term.

In scenes reminiscent of last year’s Champions League tie between the two, City thought they’d beaten Tottenham when Gabriel Jesus netted in stoppage time, only for the goal to be chalked off following a video review. The reason? Probably the most undeliberate handball you’re likely to see this season.

In years gone by, Jesus’ goal would have certainly stood, but the decision was technically the correct one due to the new handball law introduced this season. The law states that handball is to be given in any instance in which the ball hits a player’s arm or hand in an unnatural position – regardless of intention.

The law caused plenty of controversy in last year’s Champions League, but Mike Riley said this summer that Premier League officials would not be as strict in their application. Judging by Saturday’s evidence, that is clearly not true. Adding to City’s woes is the fact that Erik Lamela got away with what looked like a clear foul in the penalty area despite VAR being in use.

The decision attracted widespread criticism from pundits and ex-players, with Danny Murphy branding the new hand ball rule “a joke”. It may make hand ball decisions more black and white – something that has been called for – but to punish players in Saturday’s manner feels like one step forward, two steps back.

New boys impress but worrying signs for Newcastle and Palace

Newly promoted Norwich City and Sheffield United both picked up their first wins of the season despite being among many people’s favourites for relegation. Norwich swept Newcastle away in a 3-1 win courtesy of a Teemu Pukki hat-trick, while the Blades earned a 1-0 victory over Crystal Palace. Of course, it’s still early days, but both new boys put in impressive displays and showed that they have a fighting chance of survival this season.

On the other hand, established Premier League sides Newcastle and Palace look to be in for very tough seasons. Both sides had disappointing transfer windows, and experienced managers Steve Bruce and Roy Hodgson looked outdated coming up against fresh faces Daniel Farke and Chris Wilder. There’s a real chance both could go down this year.

Despite losing Eden Hazard and being under a transfer ban, there was plenty of optimism among Chelsea fans when club legend Frank Lampard was announced as manager this summer. However, now three games into his reign and yet to pick up a win, reality is starting to sink in at the Bridge.

Following the disappointing 4-0 defeat against Manchester United on the opening weekend, Chelsea put in an improved performance against Liverpool in the European Super Cup on Wednesday. However, after drawing 2-2 after extra time, they ultimately lost on penalties following a poor spot kick from Tammy Abraham.

Lampard was then welcomed back to Stamford Bridge on Sunday, though his side could only pick up a point against Leicester City. The final score was 1-1, but the Blues were poor in the second half and were lucky to escape with a point in the end. No one said it was going to be easy, but it’s now becoming clear just how difficult a job Lampard has on his hands to keep Chelsea in the top six. Plenty of work to do.

Liverpool centre back Virgil van Dijk is up against perennial nominees Lionel Messi and Cristiano Ronaldo for the UEFA Player of the Year award. Ronaldo will likely place third, and while there’s almost nothing to separate Messi and Van Dijk, we think the Dutchman will deservedly claim the gong.

The two’s individual stats from last season are ridiculous. Messi, being Messi, scored 51 goals in 50 games – including 12 in 10 in the Champions League – making him Europe’s top scorer once again. Meanwhile, Van Dijk managed to go an entire season without being dribbled past, registered more clean sheets than any other player in Europe’s top five leagues, topped the charts for duels won and also played more passes than any other defender.

Messi led Barca to the La Liga title, but the team fell short in the Copa del Rey and also capitulated to Van Dijk’s Liverpool in the Champions League, which of course the Reds went on to win. We think Barca’s cup exits – particularly the European defeat to Liverpool – mean Van Dijk will just pip Messi to the award.

Phillipe Coutinho has the chance to kick start his career after sealing a transfer to Bayern on loan with an option to buy. The Brazilian has failed to shine since his big money transfer Barca and will hope to return to top form in Bavaria, but much of his success will come down to where Niko Kovac plays him.

Coutinho struggled on the left of a front three at Barca and will hope to play more centrally at Bayern. It’s an intriguing move, as Bayern made no secret that more naturally wide players Leroy Sane and Callum Hudson-Odoi were their prime targets this summer. Considering the sudden nature of Coutinho’s loan, there’s a hint of suspicion that the Brazilian may be an expensive stop gap option.

Not that Coutinho can’t do a decent job on the wing, but he stated his preference to play in the ‘number 10’ role at his unveiling, and that’s where Bayern will see him at his best. He’ll face competition in the form of vice-captain Thomas Muller though, so it’ll be interesting to see how this one plays out.

We may still be in the preliminary stages of the Champions League, but previous winners Celtic and Porto have already been eliminated from Europe’s premier competition. The Scottish Champions went out following a disappointing 4-3 home defeat to Romanian club Cluj, while Porto suffered a shock 3-2 home loss to Krasnador of Russia.

Both clubs have paid the price for disappointing summers during which they’ve been accused of lacking ambition. Celtic fans were already underwhelmed by the decision to appoint Neil Lennon permanently as Brendan Rodgers’ successor, and a summer in which they’ve lost Kieran Tierney to Arsenal has led to further frustration.

Porto, fresh off losing their league title to Benfica and seeing key players Yacine Brahimi, Eder Militao and Felipe depart, have missed out on the Champions League for the first time since the 2010-11 season. For clubs that rely so much on Champions League revenue to remain competitive in Europe, the failures to qualify are huge blows.

The final round of qualifiers will take place over the next fortnight, with last season’s semi-finalists Ajax needing to get past Apoel Nicosia to make the group stage.