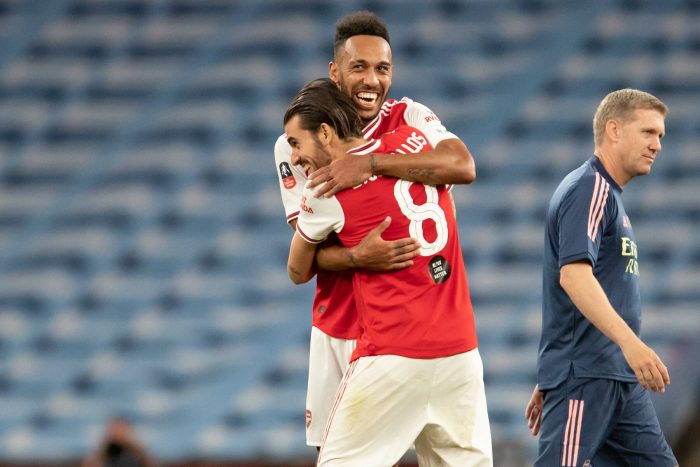 Arsenal and Chelsea booked their places in the FA Cup final this week with victories over Manchester City and Manchester United respectively. No one had really given Arsenal any hope in their showdown with City on Saturday, but it was the apprentice who came out on top as Mikel Arteta’s men romped out as 2-0 winners over the holders. City dominated the ball throughout, ending the game with 71% possession, but Arsenal were resolute in defence and lightning quick on the break. Since switching to a back three after June’s embarrassing loss to Brighton, the Gunners have only lost once – in last week’s North London derby – and their semi-final triumph will only add to their growing confidence. Their leading goalscorer, Pierre-Emerick Aubameyang, netted both goals in what was a clinical display from the Gabon international. His goals may have won his side the game but, with a contract extension at the Emirates still to negotiate, Arsenal fans will only rest easier when they know they have his services secured for the near future.

Chelsea’s semi-final against Manchester United was billed as the most consequential of the weekend, with two fresh-faced managers in charge of youthful sides looking to claim their first piece of silverware as coaches. With Guardiola’s City out of the competition the day before, the door was open for Ole Gunnar Solskjaer to get one over his cross city rivals by bringing the FA Cup back to the red half of Manchester. Two howlers from goalkeeper David De Gea brought an end to any hopes, however, as a far better organised Chelsea swept aside Solskjaer’s men. De Gea could have been given the benefit of the doubt when he failed to hold onto Olivier Giroud’s close range finish, but he was definitely at fault for the second goal, flapping at Mason Mount’s speculative shot just after half time allowing the ball to go right through him. De Gea redeemed himself somewhat with two outstanding saves in the second half, but a Harry Maguire own goal in the 74th minute put the game to bed. Bruno Fernandes grabbed a consolation goal for United following an 85th minute penalty, but it will be Chelsea who will head back to Wembley on the 1st of August to play an Arsenal side looking to end what has been a tumultuous year on a high. An FA Cup victory will be the cherry on top of the cake for Chelsea who have third place in the Premier League all but wrapped up, while Arsenal will be looking to win the cup in order to secure their place in next season’s Europa League.

Chelsea’s nearest challengers in fourth place, Leicester City, suffered yet another setback in their pursuit of European football after they were comprehensively beaten by Spurs 3-0 in the Premier League. The win boosted Spurs’ Europa League hopes while also leaving Leicester level on points with Manchester United with the Red Devils holding a game in hand over the East Midlanders. A final day of the season showdown between Leicester and United has all the makings to be a compelling match.

"I was a bit lucky in the end because it was a bit on David De Gea.

"It was so close, but it went quick and I think that is why he didn’t save it." pic.twitter.com/bbM9WAR3NX

Leeds’ promotion to the Premier League was confirmed on Friday night as West Brom lost to relegation threatened Huddersfield Town. Brentford’s loss to Stoke City the following day then confirmed their status as league champions, adding extra cause for celebration as the Whites ended their 16 year absence from the Premier League. Their success is largely down to the stability owner Andrea Radrizzani has brought to the club since he acquired it in 2017. The appointment of the fastidious Marcelo Bielsa as manager 2 years ago, seen as the tactical godfather to coaches like Pep Guardiola, was the final piece of the jigsaw. Last year’s end of season collapse was not to be repeated this time around as Leeds saw off competition from all comers to book their place in the top flight for the first time in a generation.

Elsewhere in the division, the race is on between West Brom, Brentford and Fulham for the final automatic promotion spot. West Brom and Brentford’s disappointing results this weekend have opened the door for Fulham who have been on a hot run of form in recent weeks. West Brom must beat mid-table QPR if they are to have any chance of keeping their 2nd place spot, but Brentford are the league’s top scorers and host relegation threatened Barnsley in their final game of the season. Fulham’s final game comes against Wigan who are in dire need of the points themselves. The Tics need to finish the season with at least 12 points between them and the drop zone to avoid being relegated after they suffer a points deduction for going into administration. The circumstances surrounding Wigan’s financial misfortune could not be more suspect, so should they fail to get a result at the DW Stadium, the fallout could be huge.

Nottingham Forest’s stuttering run of form in recent weeks continued as they lost in the final minute to relegation candidates Barnsley. The Tykes 1-0 win was enough to drag them off the foot of the table, but it meant that Forest must go into the final game of the season looking to confirm their place in the playoffs. The Reds have a 3 point gap and +5 goal difference over Swansea in 7th place so a draw against Stoke on Wednesday night is all that’s needed for the Reds to book a place in the playoffs for the first time since 2011. Nonetheless, Swansea will fancy their chances against a mid-table Reading side. Meanwhile Cardiff will look to book their place in the playoffs when host bottom side Hull City who have suffered a truly shocking week. Their loss to fellow strugglers, Luton Town, on Saturday was their fifth in a row and second of the week after they were humiliated 8-0 by a Wigan side who had scored 7 before half time. With a cavernous goal difference deficit between them and Charlton Athletic in 21st place, the Tigers now need a miracle if they are to stay in the division.

Real Madrid were confirmed as Champions this week as they beat Villarreal and Osasuna beat Barcelona. The victory meant it was their first La Liga title in three years and 34th in total. Barcelona had been top of the La Liga table as recently as 16th June, but draws at Sevilla, Celta Vigo and Atletico Madrid and a loss to Athletic Club opened the door to Madrid to leapfrog them. Madrid’s title is particularly significant because it is their first since Cristiano Ronaldo left for Juventus in 2018 and was won with both Eden Hazard and Gareth Bale missing the majority of the season through injury. Barca, however, find themselves suffering one of their most disappointing seasons in recent years. Knocked out of the Copa del Rey in the quarter finals by Athletic Club and dethroned as league champions, the Blaugranes’ failures this season are reflective of the lack of leadership currently at the club. Nonetheless, Messi’s two goals and one assist in Barca’s final game against Alaves confirmed his status as the league’s top scorer (25 goals) for a record 7th time and broke Xavi’s record for the most assists in a La Liga season (21 assists).

In the chase for Europe, Granada booked their spot in the Europa League for the first time in their history with a thumping 4-0 victory over Athletic Club. The Andalusian side were only promoted to La Liga last season and were simply looking to survive before the season started. A solid return to football on 12th June saw them lose only 3 times in the final run in, however, giving them the perfect launchpad with which to mount one of the most unlikely European pushes in recent years. Their win against Athletic Club also meant they swapped places with Getafe who have been on an awful run of form since the season restarted. The Madrid side had been in prime position to clinch a Champions League spot at one point this season, but just the one win in ten since 12th June saw them slide out of contention for even a Europa League spot. Real Sociedad’s draw against Atletico Madrid allowed them to sneak into the final Europa League spot, while Atleti, Sevilla, Barca and Real all had their Champions League statuses confirmed several weeks ago.

At the foot of the table, Leaganés were the final side to be relegated from La Liga after Real Mallorca and Espanyol’s drop down to the Segunda Division was confirmed last week. Needing a win against Real Madrid, Leganés put up a spirited display holding the champions to a 2-2 draw. But it wasn’t enough to keep them up after Celta Vigo drew 0-0 away to Espanyol, consigning the South Madrid side to a return to the Segunda Division after a four year stay in the top division.