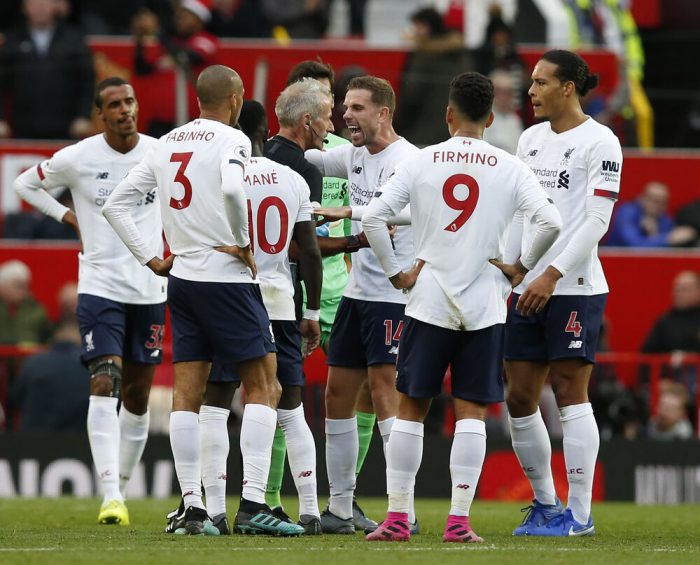 The big game of the weekend produced a somewhat surprising result, as much maligned Manchester United managed to hold Liverpool 1-1 at home. Marcus Rashford got United’s goal before Adam Lallana scored an 85th minute equaliser as Jurgen Klopp’s side dropped points for the first time in the league this season.

There were plenty of talking points in the game, with Klopp particularly frustrated by what he felt were a number of decisions that went against his side. The first instance was what looked like a clear foul by Victor Lindelof in the build up to United’s goal, and despite the challenge being reviewed by VAR, the goal stood. Sadio Mane then thought he equalised just before half time, only for VAR to correctly rule the goal out for handball.

The result leaves United sitting in 13th and seven points off the top four in what was a much needed point for Ole Gunnar Solskjaer. Liverpool remain top, seven points ahead of Manchester City, but Klopp will no doubt see the draw as a missed opportunity having dominated much of the game. Mo Salah was clearly missed, and the fact that Liverpool have now kept just two clean sheets in nine games will be a growing concern.

2 – Ole Gunnar Solskjær is the only manager Jürgen Klopp has faced more than once in the Premier League and failed to beat (P2 W0 D2). Wheelie. pic.twitter.com/oixY0pbHkG

The confusion over the Lindelof decision in the United-Liverpool game was reflective of what was a pretty bad weekend overall for VAR in the Premier League.

The major incident occurred in Tottenham’s match against Watford when Dele Alli put the ball in the back of the net with four minutes to go. The goal was reviewed to VAR for a potential handball. Referee Chris Kavanagh then signalled for a goal, only for the big screen to show a message saying ‘no goal’. It turns out that the incorrect graphic was sent to the screen, an error which caused confusion all round in what were fairly farcical scenes.

Another incident occurred in Leicester’s home match against Burnley. Burnley thought they’d equalised, but the goal was subsequently ruled out for a supposed foul on Jonny Evans by Chris Wood. Despite there seeming to be some slight, unintentional contact, whether it was enough to warrant a foul is debatable. Whether referee Jon Moss’ initial decision to award the goal constituted a clear and obvious error is even more so.

After the latest round of fixtures, Premier League referees have now failed to use the pitchside monitors review a single incident in almost 90 games of football. While the message at the start of the season was that refs would use the monitors sparingly to minimise disruption, the fact that they seem to have essentially decided not to use them at all is causing confusion.

Another source of frustration is the inconsistency over VAR decisions, with this weekend a perfect case in point. Victor Lindelof’s foul seemed far clearer than Chris Wood’s inadvertent tangle with Jonny Evans, both were reviewed by VAR, yet United’s goal stood while Burnley’s was disallowed.

Noone can deny that VAR can bring great benefits to the game. However, the way it’s being implemented thus far really does raise questions. Inconsistency and a lack of communication mean it’s becoming harder and harder to sympathise with match officials with each passing week.

It was a weekend of change at the top of the La Liga table. Barca kicked things off on Saturday against Eibar, earning an easy 3-0 win courtesy of goals from Lionel Messi, Luis Suarez and Antoine Griezmann. That result put Barca top with 19 points and it was over to the Madrid sides.

Atletico continued their worrying start to the season by picking up their third draw on the bounce. Diego Costa gave his side the advantage with a first half penalty, only for them to concede to Valencia’s Dani Parejo with eight minutes to go.

Real Madrid then proceeded to outdo their city rivals by losing 1-0 away to Real Mallorca. Eden Hazard was missing again through injury, with pressure growing on the Belgium due to the stop-start nature of his career in the Spanish capital. Right-back Alvaro Odriozola was also sent off in the second half to make matters worse for Zinedine Zidane.

It’s been a strange start to the season in Spain, with none of the big three really impressing. Atletico are struggling to click in attack and have won just four of nine games, while Real have lost just once yet have been far from convincing in their general play. Barcelona started poorly but have now won four on the bounce, boosted no doubt by Lionel Messi’s return to fitness.

The Bundesliga has received plenty of criticism over the years due to the lack of competition for perennial champions Bayern Munich, but the early indications are that this year could be a bit different. After eight games, just two points separate the teams in first and ninth place.

Much of this can be put down to the struggles of Bundesliga’s big two. Niko Kovac’s Bayern continue to look a long way from the dominant sides of the past, with the champions following up last week’s defeat to Hoffenheim with a 2-2 draw against Augsburg on Saturday.

Borussia Dortmund fans had high hopes for this term after a summer of heavy investment, but once again they are showing a defensive frailness, having surrendered leads in three of the last four games. Dortmund did, however, defeat Borussia Monchengladbach 1-0 this weekend, despite Jadon Sancho being dropped and fined after returning late from international duty.

This has let the likes of RB Leipzig, Monchengladbach and Wolfsburg in, with Gladbach currently top on goal difference. No doubt sides will begin to fall away as the season progresses, but thus far it’s looking like it could be the most exciting Bundesliga title race for a long time.

This weekend’s Championship results saw Stoke continue their mini-renaissance with an impressive 2-0 home win over promotion hopefuls Fulham. Nathan Jones had looked to be on borrowed time after a shocking run of results, but back-to-back wins have eased the pressure and mean Stoke move off the bottom.

At the opposite end of the Championship table, West Brom won 1-0 away to Middlesbrough to remain top, though Leeds are just two points behind following their 1-0 victory over Birmingham. Swansea go third despite drawing with managerless Barnsley, with Nottingham Forest, QPR and Preston the surprise names occupying the rest of the playoff places.