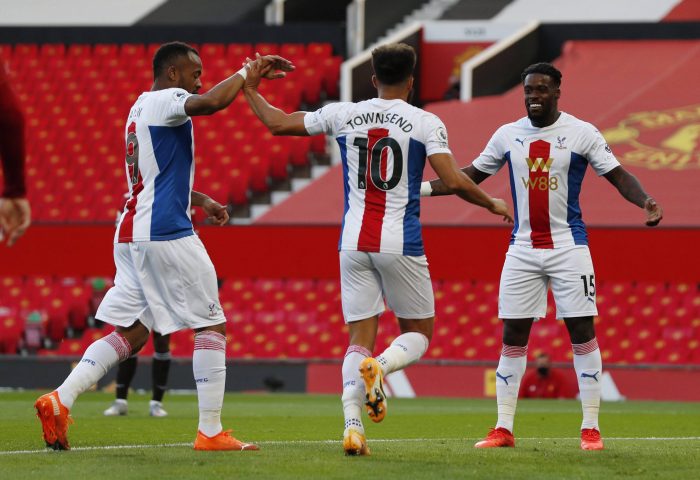 Saturday’s Premier League action was all action and this was no more the case than at Old Trafford as Manchester United got their Premier League campaign off to the worst possible start, losing 3-1 to Crystal Palace. Having started the season later than most because of their commitments to the Europa League, United were looking to move on from the recent off-field controversies that have surrounded club captain Harry Maguire and promising young forward Mason Greenwood. But it was not to be as the combination of a spirited Palace side and VAR controversy conspired to submit United to an opening day defeat. Palace took the lead early through a well worked break that ended with Andros Townsend smashing home from a tight angle. But it wasn’t until the final 15 minutes that the serious drama unfolded. Palace were controversially awarded a penalty after Andre Ayew had scooped the ball up in the area hitting Victor Lindelöf’s hand on the way up. Ayew then stepped up to take the spot kick, but his weak effort was saved by David de Gea in goal. de Gea, however, was subsequently judged to have stepped off his line before the penalty was taken, contravening the new Premier League rule that states that at least one foot must be on the line until the penalty has been taken. Zaha then stepped forward and smashed the ball high into the net, doubling Palace’s lead. United new boy, Donny van de Beek, scored to give the home side some hope, but five minutes later Wilfried Zaha made it a return to Old Trafford to remember as he scored his second and Palace’s best of the match to seal a well deserved victory.

There were plenty of goals in the rest of Saturday’s action, on what was a thoroughly entertaining weekend in the Premier League. Everton v West Brom was the early kick-off, and the Baggies looked to have made some improvements on their naïve opening day showing as Grady Diagana scored a wonderful solo goal after 10 minutes. But by half time, they had sacrificed their lead and were losing 2-1 following a second goal of the season from Dominic Calvert-Lewin and a first in the Premier League for James Rodriguez. Things went from bad to worse for the side from the West Midlands as Kieran Gibbs was sent off for foolishly pushing Rodriguez in the face on the stroke of half time, who was quickly followed by his manager Slaven Bilic who was sent off for abusing the match officials as they walked off the pitch at half time. West Brom fought back in the second half somewhat following a sumptuous free kick from Matheus Pereira, but goals from Michael Keane and two more from Calvert-Lewin to cap off an assured hat-trick consigned West Brom to a second successive defeat. Everton on the other hand are looking in fine form and sit pretty in the Champions League spots after the opening two games to the season.

Leeds United welcomed Premier League football back to Elland Road on Saturday as fellow promoted side, Fulham, made the trip up to West Yorkshire. But despite both sides playing Championship football no less than two months ago, the difference in quality was evident from the start as Helder Costa put the Championship champions a goal ahead within five minutes. Talismanic striker Aleksander Mitrovic put the game back on level terms from the penalty spot as Leeds defender Robin Koch gave away a second spot kick in as many weeks, but Leeds had the lead once again following a Mateusz Klich strike just before half time. Goals from Patrick Bamford and a second from Helder Costa within the first 12 minutes of the second half seemed to have put the game beyond the reach of the side from West London, but they made Leeds work for the victory as Bobby Decordova-Reid and Mitrovic combined to bring the score to 4-3 with 20 minutes left to play. Leeds were able to hold out, however, for a first Premier League victory in sixteen years.

The final game of Saturday pitted a resurgent Arsenal side under Mikel Arteta against a West Ham team who would have felt somewhat unlucky not to walk away with anything from last week’s home loss to Newcastle United. They will feel similarly aggrieved this time around too because, despite Arsenal’s control of possession, they always looked threatening on the counter. Nonetheless, an opening goal from Alexandre Lacazette was just what the Gunners deserved for their showing in the opening stages, only to be pegged back following a swift counter-attacking move that saw Michail Antonio bundle a Ryan Fredericks cross over the line. But it was Arsenal who ended up taking all three points as a late Eddie Nketiah goal saw them maintain their 100% record. The result also means that it’s the third time in four seasons that West Ham have lost their opening two fixtures of a Premier League season.

Unbeaten in FIVE in Manchester.

Sunday saw last season’s champions take on Chelsea who will be fancying themselves to be solid contenders for the title following their summer splurge in the transfer market. But Sunday’s fixture served as a brutal reminder of just how far this promising but inexperienced Chelsea side have to go. Liverpool bossed possession for much of the game and the first half sending off Andreas Christensen set up a second half of further domination. Widely touted German wonderkid, Kai Havertz, was brought off at half time to be replaced by Fikayo Tomori, while Jugen Klopp decided to bring on new signing, Thiago Alcantara, for his Liverpool and Premier League debut. It didn’t take long for Liverpool to assert their numerical authority, with Sadio Mane heading the Reds home following a flowing move down Chelsea’s right after five minutes. Mane was on hand to double their moments later as he forced yet another mistake from Kepa Arrizabalaga in goal. As Chelsea attempted to work the ball out from the back, the Senagalese forward closed the Spanish keeper down, forcing him to play it long only for Mane to stick a boot out and score with ease. Chelsea had the chance to close the gap on Liverpool 15 minutes from time as Thiago was adjudged to have brought down Werner in the box, meaning the German forward has now won two penalties in as many games since his move to West London. But the ever reliable Jorginho couldn’t find the back of the net, as his weak penalty was stopped by Alisson in goal. Chelsea added little else going forward as Liverpool dominated the closing stages, with Thiago making more passes (75) and having more touches (89) than any Chelsea player. His 75 passes was also a new Premier League record for players to play 45 minutes or fewer.

Tottenham got back to winning ways on Sunday following their ignominious defeat at the hands of Everton last time out. Their game against Southampton got off to a poor start as Harry Kane’s finish after 3 minutes was ruled off for offside, after which they largely submitted to wave after wave of Southampton attacks. The pressure finally told after the half hour mark as Danny Ings brilliantly brought down a Kyle Walker-Peters long ball and smashed home from close range to give the Saints the lead. But just before the break, a glorious break involving Tanguy Ndombele, Hueng-Min Son and Harry Kane saw the South Korean clean through against Alex McCarthy in goal, a chance he did not waste. What followed in the second half could not have been more different from what we’d seen in the first, as a rampant Spurs put Southampton to the sword. Three more goals from Son saw him walk away from St. Mary’s with four – all of which were assisted by Kane – while the England captain managed to bag himself a goal of his own in the closing minutes. Danny Ings managed to grab himself a well deserved brace from the penalty spot in the 90th minute, but it didn’t stop Saints boss Ralph Hasenhutll branding the 5-2 result as a humiliation for his side. Spurs, however, will be feeling quietly confident as they head into the a packed fixture list safe in the knowledge that this result and the recent additions of Gareth Bale and Sergio Reguilon mean they won’t be short on goals this season.

Elsewhere in the league, Brighton continued their impressive start to the campaign with a convincing win against Newcastle. Despite losing to Chelsea on Monday night, the Seagulls put in a fine performance against a Blues side packed with star quality. Tariq Lamptey, who was signed from Chelsea, was the star of the show that night and it was much of the same on Sunday as he put in yet another stellar performance, picking up an assist as Brighton put three past a sorry Newcastle side. There was also a convincing win for Leicester who beat Burnley 4-2 at the King Power in Sunday’s late kick-off. Burnley did take the lead early on through a typical Chris Wood finish in which the New Zealand forward muscled off two Leicester defenders to smash home from close range, but Leicester were soon back on level terms through Harvey Barnes. An own goal from Erik Pieters and a first Premier League finish for James Justin seemed to put the game out of reach for the Clarets, but a debut goal for centre back Jimmy Dunne put Sean Dyche’s men back in contention. But within five minutes, Dennis Praet fired in a sumptuous strike to seal the win for Leicester, leaving the Foxes sitting top of the table after two games played.

He was only on the pitch for 45 minutes ? pic.twitter.com/kf39z1eoeQ

The Bundesliga got off to a lively start on Friday night as a rampant Bayern Munich walked out as 8-0 winners against a Schalke side whose poor showing last season looks set to continue. Two goals from Serge Gnabry, two goals and an assist for Leroy sane on his Bayern debut and a sublime finish from academy product Jamal Musiala were the main talking points in a game that was as one sided as it was possible for it to be. The win sends out a clear message to not just those in Germany, but everyone else in Europe that Bayern are on the warpath for an era of domination. And with a lot of major sides across Europe in periods of serious transition, it’s hard to suggest they face any serious competition.

Last season’s Bundesliga runners up, Borussia Dortmund, began their domestic campaign by hosting last season’s surprise package, Borussia Monchengladbach. While the Foals gave as good as they got from Dortmund, it was the home side who came out on top in front of 9,300 fans at the Signal Iduna Park. A sumptuous finish from Gio Reyna earned Dortmund the lead in the first half, only for that to be doubled 10 minutes after the restart as Erling Braut-Haaland converted from the penalty spot. A flurry of chances came and went for Gladbach, but they were made to pay for not taking them as a lung-busting run saw Jadon Sancho charge the length of the pitch to set up Haaland for his second and Dortmund’s third, bringing the end result into no doubt that.

Elsewhere in the Bundesliga, there were convincing wins for Hertha Berlin and Ausburg, who beat Werder Bremen 4-1 and Union Berlin 3-1 respectively. Hertha will be looking for some return on their massive investment after last season’s 11th placed finish, while Ausburg will be looking for anything better than last year as they escaped relegation by only 4 points. There were also wins for Hoffenehiem, RB Leipzig and Freiburg, while Leverkusen were subject to a scoreless draw in their fixture against Wolfsburg.

The perfect debut for Leroy Sane at Bayern Munich ⚡ pic.twitter.com/oAoJ7x4fC8