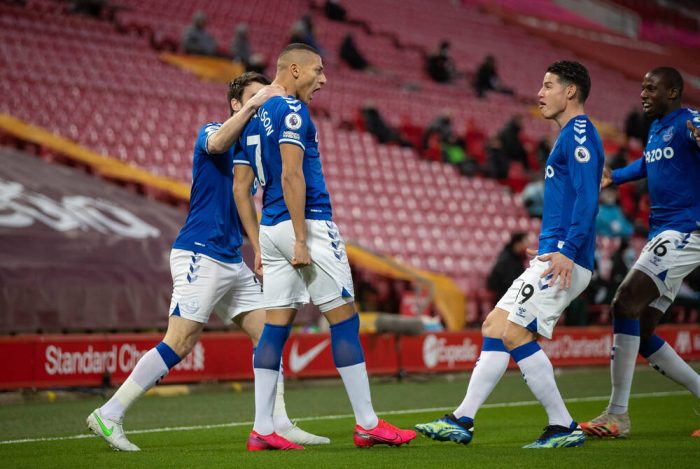 Everton won away at Anfield for the first time in 22 years, beating Liverpool 2-0 to deepen the Reds’ recent misery. Everton were ahead early on when Richarlison took advantage of some disorganised Liverpool defending by slipping in behind Ozan Kabak and firing an instinctive finish beyond Alisson. The clincher then came late on in the second half as Gylfi Sigurdsson converted from the penalty spot after Trent Alexander-Arnold inadvertently brought down Dominic Calvert-Lewin. But despite the two-goal advantage, Everton looked comfortable at one for the majority of the game. Liverpool bossed possession but offered very little going forward. And what’s more, their injury woes are set to continue as Jordan Henderson was taken off after just 30 minutes, forcing Klopp to field his 18th different centre back combination of the season by bringing on Nat Phillips to play alongside Kabak.

The defeat means that Liverpool have now lost four consecutive games at Anfield for the first time since 1923, when they also failed to defend their top-flight crown. The result leaves Liverpool in sixth place, five points outside the Champions League spots and a miserable 19 points away from the seemingly unbeatable Manchester City in first. Everton, meanwhile, are now only separated from their cross-city rivals by goal difference and will have eyes on leapfrogging them while their barren run continues.

Later on Saturday, Fulham continued their recent revival by beating fellow relegation candidates Sheffield United 1-0 at Craven Cottage. It was a must-win game for both sides and the performance across the 90 minutes showed. Neither were willing to give up anything to the other as both defended for their Premier League lives. But in the end, the game was decided by a moment of class from Fulham’s Ademola Lookman. After driving at Ethan Ampadu from the left-hand side of the box, the mercurial winger shifted the ball onto his right boot and struck a fierce shot underneath Aaron Ramsdale in goal. The win means that Fulham stay in 18th but are just three points away from moving out of the relegation zone for the first time since December 5th.

There were also home draws for Southampton and Burnley. The Saints arrested their run of six consecutive defeats in the Premier League with a hard-fought 1-1 draw against Chelsea. Burnley, meanwhile, followed up their 1-1 draw against Fulham with a nervy 0-0 display against a West Brom side reduced to 10 men from the 30th minute.

André-Frank Zambo Anguissa completed 12 (TWELVE) take-ons for Fulham vs. Sheffield Utd, the most any player has completed in a single Premier League game this season.

West Ham continued their emphatic vein of form by subjecting Tottenham to their fifth consecutive defeat. Michail Antonio got the Hammers off to the perfect start when he netted in the fifth minute, poking home the rebound after Hugo Lloris’ initial save. David Moyes’ men went on to dominate the first half as a slow and sluggish Tottenham barely made it out of first gear. West Ham punished Spurs again at the beginning of the second half as Jesse Lingard fired a superb shot into the far corner for his third goal of the season. Lucas Moura gave Spurs hope in the second half when he nodded in from a Gareth Bale corner. The impactful Welshman was nearly the hero of the hour when he crashed a gorgeous volley against the bar, only for it to loop out of play for a goal kick. It was West Ham’s heroic defending that won it for them in the end, however, with Declan Rice and Tomas Soucek playing leading roles as they diligently protected their backline.

Manchester City extended their lead at the top of the table to 10 points as they saw off Arsenal 1-0 with frightening ease. An early goal from Raheem Sterling was the difference in the end as City exercised their dominance over an Arsenal side that rarely threatened. Arsenal remain in 10th position, 6 points away from the Europa League spots and 12 points outside the top four.

What a time to be a Hammer 🎷🥁🎸 pic.twitter.com/qTYriaeB1S

Manchester United survived a slight scare in their fixture against Newcastle United as they ran out eventual 3-1 winners at Old Trafford. Rashford opened the scoring on the 30th minute, only for United to then be pegged back just six minutes later by Allan Saint-Maximin. Come the second half, however, and United were right back on top. A fine finish from Dan James gave them back the lead, before a Bruno Fernandes penalty on the 75th minute sealed the win. United move back up to second, while Newcastle remain in 17th — just three points away from relegation.

Leicester City firmed up their place in the top four by beating Aston Villa 2-1 at Villa Park. The Foxes took the lead on the 19th minute via a calmly taken James Maddison goal, only for them to go and double it four minutes later through Harvey Barnes. Villa were back in it when Bertrand Traore netted just three minutes after the restart, but it wasn’t enough. Leicester eventually held on for all three points, strengthening their claims for a Champions League spot next season.

🦊 Since his debut in August 2018, no player has scored more #PL goals from outside the box than James Maddison with 11#AVLLEI pic.twitter.com/qg8eL9mgBn

Inter went four points clear at the top of the Serie A table on Sunday as they beat local rivals AC Milan 3-0 at the San Siro. Inter had already leapfrogged the once unbeatable AC last week, but this latest victory puts clear daylight between them and the rest of the chasing pack. Inter took the lead through Lautaro Martinez’s header before the Argentinian doubled his tally following a sumptuous Inter break in the second half. Romelu Lukaku then sealed the win, powering beyond the AC backline to thump a low drive well beyond the reach of Gianluigi Donnarumma. The man of the match award, however, can only go to Inter goalkeeper and captain Samir Handanovic who pulled off a series of remarkable saves, denying two close-range efforts from Zlatan Ibrahimovic within the space of a minute.

In Spain, fresh pressure was placed on Atletico Madrid who fell to just their second defeat of the season, losing 2-0 at home to Levante. The defeat opened the door for cross-city rivals, Real Madrid, to close the gap which they duly did, beating Real Valladolid 1-0 at the José Zorrilla Stadium. With just three points separating the two sides, the Madrid derby on 7th March now takes on greater significance as Atleti look to hold onto their first La Liga title in seven years.

In Germany, RB Leipzig have the opportunity to close the gap on leaders Bayern Munich to just two points after the reigning champions were beaten 2-1 by Eintracht Frankfurt on Saturday. Robert Lewandowski was again on the scoresheet for the Bavarian side, but it was not enough to rescue a point against a Frankfurt side who are now unbeaten in seven. Leipzig have a game in hand over Bayern, and following the recent world champions’ struggles against Arminia Bielefeld in the week, Julian Naglesmann’s men have one of the best opportunities for the title in recent years.