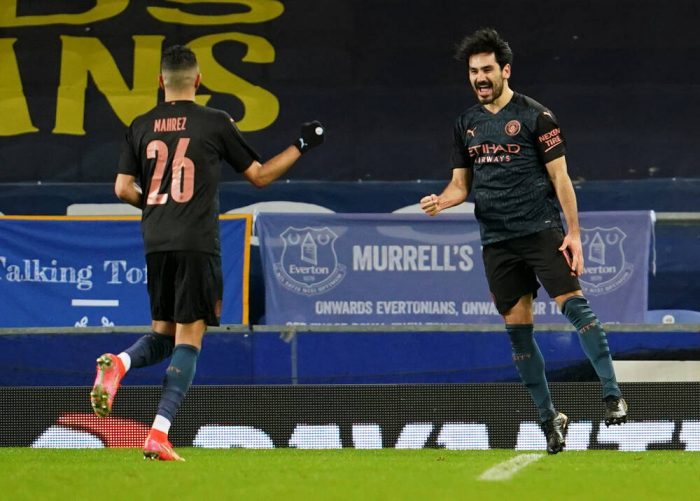 City on Course for Quadruple

Manchester City remain on course for a fabled quadruple after two goals in the last ten minutes of their FA Cup quarter-final tie against Everton at Goodison Park saw them progress to the competition’s last four where they’ll face Chelsea.

Everton came close to opening the scoring just before the half-time break when Yerry Mina glanced an inswinging corner goalwards, only to be thwarted by City’s Oleksandr Zinchenko on the goal line. But that would be the closest the Toffees would come to the City goal and as the game drew on it became simply a matter of when City would make the breakthrough. Third-choice goalkeeper, Joao Virginia, did his best to thwart the Sky Blues and pulled off some impressive stops from the likes of Raheem Sterling, but he was left helpless as City finally broke the deadlock in the 84th minute. Making a marauding run forward from defence, Aymeric Laporte latched on to a Kevin De Bruyne through ball and managed to squeeze an effort at goal from between two incoming Toffees defenders. The young Portuguese keeper, making his FA Cup debut, got fingertips to the effort and turned it onto the crossbar, but he was left helpless as the ball ricocheted back into the path of the oncoming Ilkay Gundogan who converted from close range with a controlled diving header.

Minutes later, De Bruyne put the result beyond doubt by doubling City’s lead in assured fashion. The Belgian raced clear of the Everton backline and fired a fierce left-footed finish past the onrushing Virginia. The win was Pep Guardiola’s side’s twenty-fifth victory in their last twenty-six games and means they remain in with a chance of becoming the first English club to win all four major honours in one season.

Earlier on Saturday, Bournemouth and Southampton played out the first quarter-final tie of the round and despite their recent Premier League struggles, it was the Saints who came out comfortably on top. Nathan Redmond proved to be the difference-maker, setting up Moussa Djenepo to slide home their first after a fine run and a defence-splitting pass from the former Norwich man. And Redmond was soon on the scoresheet himself after he finished off another impressive foray into the Bournemouth half with a drilled finish across the despairing Asmir Begovic. The one-time England winger then sealed the win with the Saints’ third goal when Stuart Armstrong’s curled effort cannoned back off the post and straight into his path. Redmond was in the right place at the right time and found the corner of the net with a first-time side-footed finish.

The win means that Southampton will play in just their second FA Cup semi-final in the last eighteen seasons and Ralph Hassenhuttl will fancy his side’s chances given that they’ve managed to avoid Manchester City and Chelsea in the draw.

The Saints’ opponents at Wembley will be Brendan Rodgers’ Leicester side, who have reached their first semi-final in 39 years after seeing off Manchester United at the King Power Stadium on Sunday thanks to two goals from Kelechi Iheanacho. The last semi-final berth will be occupied by Chelsea, who made hard work of beating Paul Heckinbottom’s Sheffield United side, but eventually emerged as 2-0 winners thanks to an Oliver Norwood own-goal and a 92nd-minute strike from Hakim Ziyech.

Say it louder for the people at the back ????

Southampton are off to Wembley! ????

It's just the second time in the last 18 seasons that they've reached the FA Cup semi-finals.#MOTD pic.twitter.com/w2St1OzqcY

The pick of the weekend’s Premier League action came at the London Stadium as Arsenal fought their way back from 3-0 down to salvage a draw against West Ham. Gunners boss Mikel Arteta remarked that his side’s first-half performance will give him nightmares but also said they showed spirit to come back into the game after seemingly being cut adrift in the first half-hour.

Jesse Lingard celebrated his first England call-up in nearly two years by opening the scoring for the Hammers with a fine half-volley in the fifteenth minute. The Manchester United loanee has been in scintillating form since his move to East London with five goals in seven games and it was his quick thinking just two minutes later that led to the Hammers’ second. Whilst Arsenal’s players lobbied referee Jon Moss, Lingard caught them off-guard with a quickly taken free-kick and played in Jarred Bowen whose angled effort was able to squirm under keeper Bernd Leno. Tomas Soucek added a third in the 32nd minute when a Michail Antonio header was guided in following the slightest of touches from the Czech midfielder.

The Gunners’ fightback began soon after when top scorer Alexandre Lacazette’s neat control and rifled shot found its way past West Ham stopper Lukasz Fabianski via the leg of Soucek, who was unfortunate to be credited with the own-goal. And it was another Hammers own-goal that would see the Gunners back in with a shout in the 61st minute. After Martin Odegaard smartly found Calum Chambers down the right flank, the right-back whipped a ball across the West Ham six-yard box, where Craig Dawson could do little but power the ball past his own keeper. The unlikely comeback was completed in the 82nd minute when Nicholas Pepe’s pinpoint cross found Lacazette at the far post and the Frenchman was able to guide a perfectly-timed header into the Hammers net for his eleventh Premier League goal of the season.

The shared points will do little for either side as West Ham missed the chance to go level on points with fourth-placed Chelsea and Arsenal look set to miss out on European qualification through the league altogether. Arteta’s side are languishing in ninth-place in the Premier League and will have to pin all their hopes of continental football next season on winning the Europa League.

Elsewhere there were wins for Leeds who beat Fulham 2-1 at Craven Cottage on Friday night; Brighton put some much-needed distance between themselves and fellow-strugglers Newcastle with a 3-0 win on Saturday at the Amex and Spurs, who capped off the weekend with a 2-0 win over Aston Villa thanks to goals from Vinicius Jr and Harry Kane.

Lionel Messi became Barcelona’s all-time leading appearance maker as he made his 768th appearance for the Blaugrana, surpassing Xavi Hernandez’ previous record of 767 games for the club. The inimitable Argentinian forward was in typically ruthless form as he contributed two goals to Barca’s 6-1 thrashing of Real Sociedad. He’s now scored an incredible 677 goals for the Catalan club and with his future at Camp Nou still up in the air, he’ll be hoping his form can help Barca close the four-point gap on league-leaders Atletico Madrid and secure an eleventh La Liga title in his time at the club. But Barca know they’ll have to rely on Atletico dropping points in the run-in if they are to have any chance of regaining the league title and Diego Simeone’s side didn’t slip up this weekend. Luis Suarez’ 500th career goal gave them a 1-0 win over Alaves whilst Real Madrid stayed in the hunt with a 3-1 win over Celta Vigo.

Robert Lewandowski scored his 35th league goal of the season as Bayern Munich maintained their four-point lead at the top of the Bundesliga. The Polish marksman scored a perfect first-half hat-trick in Bayern’s 4-0 win over Stuttgart, despite Bayern going down to 10 men with the game at 0-0. The goals mean Lewandowski has now set a new personal best for Bundesliga goals in a season and is just five short of Gerd Muller’s all-time record of 40. Lewandowski is also now the Bundesliga’s second all-time top scorer, having surpassed Klaus Fischer’s tally of 268, but is still 94 goals short of Muller’s record of 365.

Juventus manager Andrea Pirlo suffered another damaging defeat as his side went down 1-0 to Serie A minnows Benevento at the Allianz Stadium. Despite fielding a side including the likes of Cristiano Ronaldo, Matthias De Ligt and Alvaro Morata, the Bianconeri failed to make a breakthrough against the tiny Campanian club and the away side took the lead in the 69th minute through Argentinian Adolfo Gaich. The win moves Benevento seven points clear of the relegation zone and will give them hope of avoiding the drop for the first time, having been relegated in their only other Serie A season in 2017-18. Now ten points adrift of league leaders Inter Milan, Pirlo and Juventus look set to miss out on the Serie A title for the first time in nine years. Having also been knocked out of the Champions League at the quarter-final stage by Porto, Juve will be looking to May’s Coppa Italia final to salvage some silverware from an otherwise disappointing season.

5-1 up and they've flooded the box with 8 players.