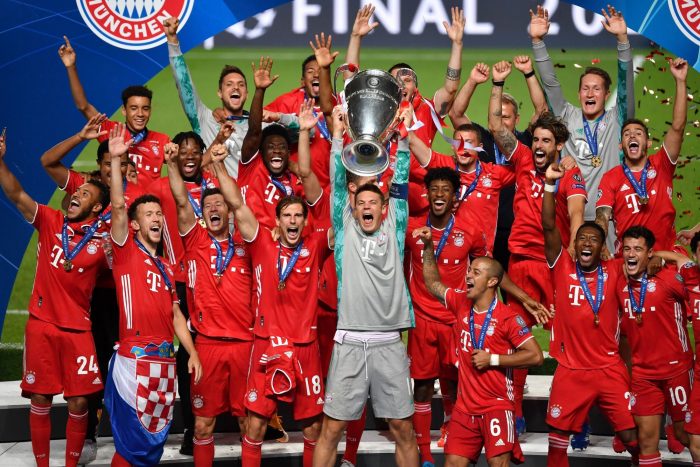 The mammoth football season of 2019/20 was finally brought to an end last night as the Champions League final was contested between debutantes at this stage PSG and five-time winners Bayern Munich. It was a game that brought into sharp focus a whole range of stories. Neymar was looking to justify €222 million transferto PSG three years after he left Barcelona to move out of Lionel Messi’s shadow. Meanwhile, Bayern’s talismanic front man, Robert Lewandowski, was aiming to cement his name as an all-time great having had the season of his life, scoring 55 goals in all competitions. The prolific Pole had never won the Champions League either, having lost his only previous final to Bayern in 2013 when still employed by Borussia Dortmund.

The form of PSG and Bayern was pointing towards the 2020 final being a true classic, but the goalfest we were promised never arrived. The first half was a tense and taut affair, with both sides clearly understanding the psychological toll conceding first would incur. As such, risk taking was in short supply throughout the first half as the bright young stars in PSG’s and Bayern’s ranks waited for their nerves to settle. There were still chances in the first half, with Lewandowski twice squeezing a shot on a target from the tightest of opportunities. But the biggest chances of the half belonged to the Parisians as PSG spurned three golden opportunities to go ahead. The first came after 17 minutes as Neymar continued his poor run in front of goal by failing to slide a shot underneath Manuel Neuer who was on hand to parry the Brazilian’s rebound out for a corner. Di Maria then found himself in acres of space in the penalty area six minutes later following Ander Herrera’s delicate slide rule pass, only for the Argentina international to balloon his shot well over the bar. The clearest cut chance came just before halftime, however, as a terrible Bayern defensive mistake led to David Alaba gifting the ball to Mbappe in the area. After an unnecessary bit of interplay between Hererra and Mbappe, the French World Cup winner finally got his shot off only to tamely pass the ball into the eager grasp of the Bayern captain in goal.

But if the first half was defined by PSG failing to take their opportunities, then the second was all about Bayern taking theirs. The Bavarians started the second period the brighter, passing the ball with far more zipthan the whole of the first 45 minutes. Their reward came in the 59th minute as a fine flowing move was started off by a sumptuous 30 yard pass from the imperious Thiago that found Joshua Kimmich in the PSG half. The German full-back drove forward, finding Serge Gnabry on the left wing who slipped the ball into Lewandowski in the penalty area. The Polish international then poked the ball back to Kimmich on the edge of the box, who was afforded enough space to pick out a peach of a cross to the back post where Kingsley Coman was on hand to nod past Kaylor Navas in goal. Coman’s domination of the second half continued as he was able to make his way past Thilo Kehrer at right-back with increasing ease. PSG did have chances, however, and will be left feeling aggrieved after a clear foul on Mbappe in the box was neither given by the on-field referee nor even considered by the VAR. They nonetheless heaped the pressure on Bayern as the final minutes ticked by, with the Bavarians riding their luck somewhat as Neymar’s stabbed cross was only just missed by the outstretched boot of Eric Choupo-Moting. But the Germans held on to the final whistle and managed to claim their sixth European title.

Their Champions League victory sealed an historic treble for Bayern who had spent the first half the season going nowhere under Niko Kovac. But since Hansi Flick’s takeover following a humiliating 5-1 defeat at the hands of Eintracht Frankfurt in November, a new found confidence has flowed through the side who finished their Champions League campaign having won every single game. What’s more, as well finishing the season with his first European title, Lewandowski also ended the campaign as top scorer in all three of the competitions Bayern have won this year.

PSG, however, will be left wondering if their chance will ever come. The Parisians have spent over €1 billion on transfer since 2011 and have dominated Ligue 1, but it was a former academy product who ended their European dream last night. There were some who felt their brutal loss in the final was deserved, however, following a meteoric but controversial rise to the top that has been driven by Qatar’s state owned shareholding organization Qatar Sports Investments (QSI). Nonetheless, they will undoubtedly struggle to reach the same heights next season. Thiago Silva had already committed his future elsewhere before the final and is reportedly close to signing for Chelsea, which lands PSG with the unenviable task of finding a fitting replacement for him. They will also have to contend with the fact that their European rivals will come back stronger than ever before, as teams like Manchester City, Liverpool, Real Madrid and Juventus will look to expunge the ghosts of their disappointing European campaigns.

Friday night witnessed the culmination of Europe’s second tier competition as Inter Milan and Sevilla battled it out for the Europa League title. Inter were looking to follow up their excellent second placed finish in Serie A with a first trophy in 9, while Sevilla were on the hunt for their sixth Europa League title in 14 years.

Of the two premier European finals on this weekend, Friday’s contest was by far the most entertaining. The game got off to a great start as Romelu Lukaku’s lung busting run after 2 minutes took him to just inside the penalty area where he was hauled down by Diego Carlos. The subsequent penalty was duly slotted home by Lukaku, which was the 11th Europa League game in a row that he has scored in as well as his 34th of the season, drawing him level with Ronaldo Nazário’s record for the most goals scored in a debut Inter season. But no more than 7 minutes later, Sevilla were back on level terms. Several eyebrows were raised when Julen Lopetegui decided to play Luuk de Jong upfront instead of Youseff En-Nesyri who has been the Spaniard’s preferred striker in recent weeks. But his desire to get a powerful header on the end of Jesús Navas’s flighted cross more than justified his selection as Samir Handanović got a hand to it but couldn’t keep it out. The Dutch forward was on hand again 20 minutes later, peeling off to the back post to land another sumptuous header on Éver  Benega’s free kick, sending the ball looping over Handanović in goal. But no more than 2 minutes later, Inter had restored parity as the experienced defender Diego Godín rose highest in the box to nod Marcelo Brozović’s free kick into the back of the net.

After a breathless first period, many were expecting more of the same. But what followed was a cagey second period, almost as if the flurry of action in the first half had caused both sides to approach the rest of the game with more caution. But it was Diego Carlos who redeemed himself for his foul in the first half with an inventive finish. Once again, Inter failed to clear their lines from a set piece, leaving Carlos unmarked in the middle to attack the looping ball with an overhead kick. But the replays showed that his shot was in fact going wide and that it was the deflection off Lukaku that took it in, meaning it was an own goal for Inter’s talismanic forward. Inter pushed hard for the rest of the second half, with Alexis Sanchez almost poking the ball home after a goalmouth scramble late on, only for Jule Koundé to save the ball from tamely rolling over the line.

In the end then it was Sevilla who held out, winning themselves a sixth Europa League title. It was the perfect farewell for Éver Banega who is set to leave for Saudi Arabian side, Al-Shabab, at the end of the season. There was also some satisfying symmetry for Jesús Navas who won his first two Europa League’s with Sevilla back in 2006 and 2007 as a promising young winger. His victory on Friday means he was able to lift the trophy as captain and a fully established club legend. Inter’s wait for a return of past glories, however, goes on. They have noticeably improved in recent years with new club chairman, Steven Zhang, bringing some stability to the club since his appointment to the role in 2018. But despite their recent successes, it is widely understood that Antonio Conte will be leaving his role as Inter coach with Max Allegri seen as the likely replacement.

The Premier League fixtures for the 2020/21 campaign were released this week as teams in England’s top tier get ready for one of the quickest turnaround in seasons in living memory. The opening weekend is where attention is usually drawn to first and there are some fixtures that promise not to disappoint. The 12th September sees a meeting of champions as last season’s Premier League winners, Liverpool, host Championship champions Leeds United. It is the trickiest possible start to Leeds’ first season in the top flight for 16 years, and it won’t get any easier as they face up against Manchester City no less than three weeks later.

The other newly promoted sides also face decidedly tricky starts, with Fulham playing host to Arsenal and West Brom welcoming Leicester City to the Hawthorns. Arsenal in fact have arguably the worst opening round of fixtures of any of the Top Six, with games against Liverpool, Sheffield United and Manchester City to navigate in the first month. Manchester United, however, have a far more tepid start to league action, facing up against Burnley, Crystal Palace, Brighton, Tottenham and Newcastle in their first five games of the campaign.

Liverpool are then set to face local rivals Everton about a month later on October 17th, but it is between December and January that the greatest concentration of derbies can be found. The North London and Manchester derbies threaten to be some of the most highly contested in recent seasons, with all of the Top Six in positions of relative stability for the first time in years. But it is on the 16th January that the potentially most interesting derby is set to take place, as Wolves and West Brom will fight out the first top flight Black Country derby for 9 years. West Brom did the double over their bitter rivals in 2011/12, but Wolves meteoric rise over the last 4 years threatens to tip the balance of power in their direction for the foreseeable future.

This season’s games are also going to come thick and fast with fixture congestion highly likely. As a result of last season’s late finish due to COVID-19, this year’s campaign is 5 weeks shorter with the winter break scrapped. The Community Shield is due to be played on Saturday 29th August between Premier League winners, Liverpool, and FA Cup winners, Arsenal, with players then going on international duty before the season officially begins on the weekend of 12th September. Manchester United and Manchester City have also been given delayed starts to the campaign so that they can have the adequate time off following their extended seasons in the Europa and Champions Leagues, respectively.

? Someone say Liverpool first game of the season? pic.twitter.com/OxpVCqbbiA