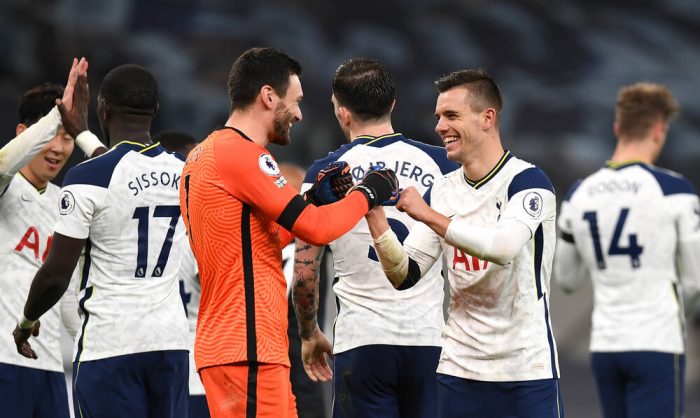 Spurs cemented their credentials as title contenders on Saturday as they beat Manchester 2-0 at the Tottenham Hotspur Stadium to move top of the Premier League table. The City hierarchy will have been buoyed by the signing of Pep Guardiola’s new two-year contract on Thursday, but the result against Spurs will have left them somewhat concerned. It was the typical City performance that many expected, but the lack of any alternative tactic beyond that meant they consistently failed to get past Spurs’ patient low block. Instead, we bore witness to another Mourinho masterclass, as Spurs chose their moments to exploit City’s ludicrously high line.

And Spurs fans didn’t have to wait long for the opening either, as Heung-Min Son opened the scoring for the Lilywhites within the first 5 minutes. A glorious lofted ball from the revitalised Tanguy Ndombele found Son in behind the City defensive line, leaving him the easy task of sliding the ball under the legs of the recklessly on-rushing Ederson in goal. City had their moments to get back into the game, with Aymeric Laporte coming closest, only for his fine finish to be ruled out for Gabriel Jesus’s handball in the build-up.

Spurs took advantage of City’s spurned opportunities in the second-half as substitute Giavanni Lo Celso doubled the scoreline for the hosts with his first touch since coming on. Another quick break from Spurs and a foolhardy piece of goalkeeping from Ederson did for the goal this time, a consistent error that will have left Guardiola fuming. But while City seem to have been found out this season, Spurs have been a revelation. By taking them to the summit of the table, Mourinho has managed to prove so many of his doubters wrong this season, an achievement that can largely be attributed to the relationship between Harry Kane and Son. The strike partnership has flourished this season, with Kane largely playing the role of provider. In fact, under Mourinho, Kane’s all-round game has improved enormously as the Englishman now begins to resemble an industrious box-to-box midfielder rather than a striker.

Harry Kane has provided the most Premier League assists this season (9).

Heung-Min Son has scored the most Premier League goals this season (9).

Spurs are on cloud nine. 🤩 pic.twitter.com/NAnLShZik5

On Sunday, reigning champions Liverpool put in their own convincing performance as they saw off a Leicester side who have had their own title aspirations of late. The Reds have been in shaky form this season as injuries have ravaged their backline, but their assured display against a Leicester side who put five past Manchester City only two months ago showed none of their previous frailties. An own goal from Jonny Evans and yet another goal from Diogo Jota put Liverpool 2-0 up before half time, while Roberto Firmino’s header in the 86th minute sealed the win.

Firmino has been struggling in front of goal of late, and earlier in the game, it looked like his poor scoring run was set to continue. After skipping past Wesley Fofana on the edge of the Leicester box, Firmino was clear through, only for his shot to cannon off the post and the rebound to be scrambled off the line with just a centimetre the difference between a 2-0 and 3-0 lead. But with just four minutes left in the game, Firmino wasn’t to be denied again as he nodded home emphatically from a James Milner corner. Leicester did have their chances in the game, the most notable of which came when Harvey Barnes poked his shot wide following a typical foxes counter-attack. But for the majority of the game, they largely looked flat and uninspiring, highlighting the work still left to do for Brendan Rogers and his coaching staff.

Elsewhere in the league, Everton returned to winning ways after a run of three straight defeats as they beat Fulham 3-2 at Craven Cottage, but it wasn’t without struggle. Naive defending from the newly-promoted home side gave the Toffees a 3-1 lead at the break, but a second-half comeback saw them bring it back to 3-2 courtesy of a goal from Ruben Loftus-Cheek. But for all their improvements, Fulham could not improve their poor run of penalties as Ivan Cavaleiro missed their third spot-kick of the season, slipping as he stepped up to take the shot. The result now sees Fulham hovering just above the relegation zone in 17th while Everton move up to 6th.

The Championship’s early pace-setters, Reading, were subjected to their fourth straight loss as they fell to a 4-2 loss to Bournemouth in what was a thrilling game on the south coast. The Royals had gone into half-time with a deserved 2-0 lead courtesy of goals from Lucas Joao and Sone Aluko, but the Cherries pulled off an assertive turn around to send them to within a point of the Championship summit. A double from Dominic Solanke and a fine finish from Arnaut Danjuma recovered the lead for Bournemouth, while an early goal of the season contender from Lewis Cook sealed the win as the Championship promotion race begins to take shape.

There was also victory for Norwich as they continued they overtook Reading as league leaders. A tight 1-0 win over Middlesbrough thanks to a Teemu Puki penalty was the difference as the Canaries aim to return to the Premier League at the first time of asking.

Elsewhere in the division, there was plenty of drama. Stoke came out as the eventual winners in a roller coaster game against Huddersfield Town, holding out for a hard-earned 4-3 victory. Despite only having 32% of the ball during the win now sees the Potters move up to 7th, just a point outside the play off places.

There were also a series of managerial changes over the international break, as the Championship as Gary Monk of Sheffield Wednesday and Philip Cocu of Derby became the third and fourth managerial casualties of the season so far. The experienced Tony Pulis has taken over at Wednesday on a full-time basis, while Wayne Rooney has assumed the temporary managerial responsibilities at Derby in a player-manager capacity. Nonetheless, neither man could prevent difficult starts to their new respective roles. Sheffield Wednesday fell to a limp 1-0 loss to Preston in a game that was mired in controversy thanks to an incident in which Preston defender Darnell Fisher appeared to grab the genitals of Callum Paterson. Derby, meanwhile, fell to their 8th defeat of the season, losing 1-0 to Bristol City, a result that leaves them rooted to the foot of the table with just 6 points and 1 win in 12.

Their East Midlands rivals, Nottingham Forest, suffered a similarly depressing defeat against Barnsley, losing their first game in three matches following a solid bounce in form since the arrival of Chris Hughton at the club. The Reds performed well throughout the game, but two goals late on from the Tykes proved saw them run out as 2-0 winners, moving them to 13th in the table while Forest remain stuck in 20th.

Lewis Cook's first goal for Bournemouth is an absolute peach! 🍑 Not only that, it also completes Bournemouth's comeback, having been two goals down at half-time.

Milan continued their stunning start to the Serie A season by recording their 6th win of the season from 8 games, of which they have lost none. Milan opened the scoring thanks to a gorgeous long-range header from the now 39-year-old Zlatan Ibrahimovic. The Swede was on hand again to double Milan’s lead in the second half, getting on the end of an Ante Rebic cross to poke home from close range. Dries Mertens managed to pull one back for Napoli, but with Tiemoue Bakayoko sent off on the 65th minute, Milan were able to finish off proceedings with a goal from Jens Petter Hauge in the 95th minute to send them to the top of the Serie A table.

Earlier in the day, the surprise package of the Serie A season, Sassuolo had themselves taken the top spot with their nervy 2-0 away victory over Hellas Verona. Sassuolo went into the game as the top scorers in the league, while Verona held the mantle as the best defence, and as such, it took two special goals to make the breakthrough for the visitors. Gorgeous long range finishes from Jeremie Boga and Domenico Beradi either side of half-time were all that separated the two sides, although Verona should have scored on a number of occasions, hitting the post on three occasions. Nonetheless, the victory ensured that Sassuolo continued their unbeaten start to the campaign as they remain just two points behind Milan.

Elsewhere in Europe, Atletico Madrid secured a landmark win over Barcelona as Diego Simeone’s men continued their unbeaten start to the season. Their 1-0 win over the Blaugranes came courtesy of a calamitous mistake from goalkeeper Marc-André Ter Stegen, who came charging out to meet Yannick Carrasco high up the pitch, only for the Belgian to calmly move the ball past him and fire home into an empty net from 25-yards out. The win now sees Atleti move up to 2nd in the table, level on points and goal difference with league leaders Real Sociedad who themselves won over the weekend, claiming a 1-0 away victory at Cadiz.

Zlatan Ibrahimovic has scored 10 goals in 6 Serie A appearances so far this season. He was playing for LA Galaxy just 13 months ago and now he is the league's top scorer. What he’s doing at 39 years of age is not normal. Facts 💯 pic.twitter.com/Y8OxnZdUyL