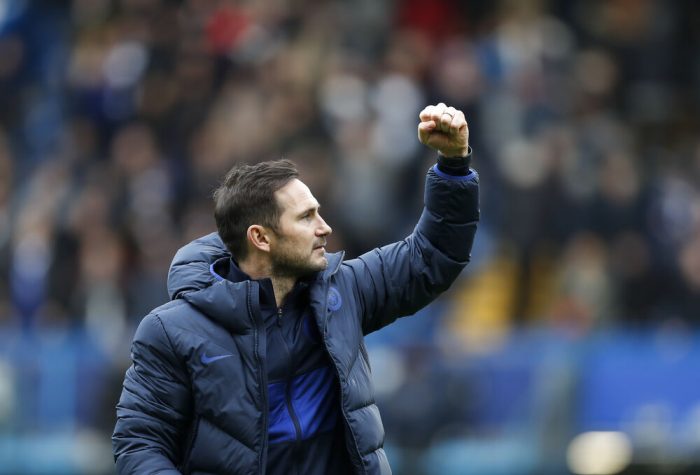 This weekend saw a huge match in the battle for Champions League football take place, with fourth-place Chelsea facing off against fifth-place Spurs. A win for Spurs would’ve taken them above their bitter rivals and into a Champions League spot, so there was a lot on the line.

Chelsea went into the match in poor form, without a win in four in the league and fresh off a 2-0 home defeat by Manchester United the previous weekend. Spurs had won their last two games, but it was their first league tie since Son Heung-min joined Harry Kane on the treatment table and left Jose Mourinho without a recognised striker.

Frank Lampard mixed things up following his side’s poor performance against United, going with a back three, dropping Willian to the bench and using Ross Barkley and Mason Mount in support of Olivier Giroud. Mourinho also went with a back three, January signing Steven Bergwijn filling in upfront.

Lampard has been reluctant to use Giroud this season, but the Frenchman didn’t take long to remind his manager of his capabilities as he gave Chelsea the lead in the 15th minute. The Blues dominated much of the first half and went two up shortly after the break, Marcos Alonso – another player used sparingly by Lampard – notching Chelsea’s second.

Spurs’ pressure resulted in an own goal from Antonio Rudiger a minute before the end of normal time, but Mourinho couldn’t secure a point on his return to the Bridge. This time the pupil got the better of the master in what was a huge win for Lampard and Chelsea.

? Chelsea have now won 461 points in #PL London derbies, more than any other team#CHETOT pic.twitter.com/do9AnKHrek

Spurs loss gave Manchester United the opportunity to gain some ground on their London rivals, and Ole Gunnar Solskjaer’s side duly took their chance. United made short work of 19th-placed Watford at Old Trafford, with new signing Bruno Fernandes giving them the lead with a first-half penalty. Anthony Martial and Marcus Greenwood added goals in the second half, securing a 3-0 win and moving United fifth, three points off Chelsea and fourth spot.

Elsewhere in the league, third hosted second as Leicester welcome Manchester City to the King Power. It was a competitive, high-intensity game, with Gabriel Jesus giving City a 1-0 with an 80th-minute strike. It’s a result that leaves Leicester with just one win from six, and while the Foxes looked to have essentially guaranteed a Champions League place at the turn of the year, their poor run will now have them nervously looking over their shoulders at the chasing pack.

Arsenal got their second win on the bounce, winning a topsy turvy game against Everton 3-2, sending the Gunners into 9th and leaving Everton in 11th. Wolves also ended a three-game run without a win by dismantling basement club Norwich 3-0, moving Nuno Espirito Santo’s side into eighth place. With just seven points separating fourth from tenth, the race for the European spots remains wide open.

Arsenal are the only Premier League team still unbeaten in 2020 across all competitions.

It’s mostly as you were at the bottom, with four of the bottom five – Bournemouth, Aston Villa, Watford and Norwich all losing. 18th place West Ham have the opportunity of moving out of the drop zone if they can get a result against Liverpool at Anfield tonight, though even the most optimistic of Hammers fans would admit that looks very unlikely to happen.

This season’s La Liga title race has been one of the closest of recent years, with Barcelona and Real Madrid almost inseparable at the top so far, and it took another twist this weekend. Barca were up first, the Catalans making light work of struggling Eibar the Camp Nou. A sublime performance from Lionel Messi inspired the team to a 5-0 victory, the Argentine netting four and Arthur bagging a late fifth.

That sent Barca top, with Real needing a win against Levante to reclaim first position. Eden Hazard made his return after three months out, but the Belgian failed to inspire his team before limping off in the 67th minute in what has been a disastrous injury-hit debut season. Real were unable to find a way through despite dominating possession, and a goal from winger Jose Morales in the 79th minute gave Levante a shock win. That result leaves Real two points behind Barca ahead of the huge Clasico this coming Sunday.

Eden Hazard has missed as many games for Real Madrid this season as he did in seven seasons with Chelsea ? pic.twitter.com/PYI3vQVLmy

Elsewhere in La Liga, Atletico got a big win in the race to secure a Champions League spot, following up their surprise win over Liverpool in mid-week with a 3-1 home win over Villarreal. Getafe and Sevilla also faced off in a battle for a top-four spot, a 3-0 win sending Sevilla fourth at the expense of their opponents, who drop down to fifth after a second consecutive league defeat.

Last week saw the return of the Champions League, but it wasn’t a happy one for the English participants. Liverpool were first up, returning to the Wanda Metropolitano following last season’s final win to face Atletico Madrid. Jurgen Klopp’s side were heavy favourites considering their dominance in the Premier League in contrast to Atletico’s domestic struggles, but it didn’t turn out that way.

The Spaniards took a surprise early lead when midfielder Saul Niguez converted from close range following a corner. It was then over to Liverpool to breach the notoriously stubborn Atletico defence, but they failed to register a shot on target throughout the entire match, despite dominating possession. Jurgen Klopp and his players will still be confident of going through with the second leg at Anfield, but Atletico have shown that it’s not going to be as straightforward as many first thought.

Atletico Madrid won against Liverpool despite having 27.5% possession, the lowest by a winning team in a UCL knockout game since Basel in Mar 2018 (vs. Man City).

Tottenham then hosted high-flying German side RB Leipzig on Wednesday, the visitors just a single point behind first-place Bayern Munich in the race for the Bundesliga title. Many tipped Spurs to the struggle in the absence of both Harry Kane and Son Heung-min, and they certainly failed to get a grip on the game in the first half as Leipzig came out flying.

The Germans had spurned numerous opportunities to take the lead in the first half, but they eventually did in the 58th minute, Ben Davies giving away a penalty and striker Timo Werner tucking it away for his 26th goal of the season. Spurs improved as the game wore on but failed to find an equaliser and now have it all to do in Germany in three weeks’ time.

The other glamour fixture from last week saw Borussia Dortmund host PSG in a tie that promised plenty of attacking football. 19-year-old Erling Haaland stole the show and upstaged PSG’s expensive superstars, giving the Germans the lead from close range in the 69th minute and then rocketing a long-range shot in the 77th, just two minutes after Neymar had equalised. The game finished 2-1 to Dortmund, though it feels very finely poised ahead of the second leg in Paris.

Finally, two of the competition’s less-fancied sides faced off as Atalanta hosted Valencia, it being Atalanta’s first season in the Champions League. The Italian side weren’t even playing at their home stadium due to renovation works, the game being hosted in Milan at the San Siro, and have a wage bill equal to that of Championship side Reading. However, they’re an excellent attacking side and thrashed an injury-hit Valencia 4-1 to put one foot in the quarter-finals, a fantastic achievement considering they lost their first three group matches.

? 1st #UCL knockout stage win at the San Siro by an Italian side in 7 years…

It was a fairly positive showing overall from the British clubs in the Europa League on Thursday. Wolves were the pick of the bunch, securing a 4-0 home win over La Liga strugglers Espanyol to all but confirm their spot in the last 16. Arsenal also picked up a 1-0 win away to Olympiacos, a notoriously difficult place to visit, with an 81st-minute goal from Alexandre Lacazette giving the Gunners the win.

Manchester United were less impressive, drawing 1-1 away to Belgian side Club Brugge. Ole Gunnar Solskjaer’s side went 1-0 in the 15th minute courtesy of a howler from Sergio Romeo, with Anthony Martial equalising around twenty minutes later. United will still be confident of going through with the second leg to be played at Old Trafford, but Brugge did draw 2-2 against Real Madrid at the Bernabeu earlier in the season, so it could be a potentially tricky match.

Elsewhere in the Europa League, Rangers completed a stunning comeback to defeat Portuguese side Braga 3-2, having been 2-0 down, with Ianis Hagi, son of Romanian legend Gheorghe, bagging two. Celtic drew 1-1 away to FC Copenhagen, and the Hoops will be confident of going through at Celtic Park having the advantage of an away goal.

Incredible scenes as Rangers come from 2-0 down to lead 3-2 at Ibrox!

One surprising result from the fixtures was Ajax’s 2-0 defeat by Getafe. The Spanish side are flying high in La Liga, but Ajax were still favourites to progress, although the looks to be very difficult now. Having exited the Champions League at the group stage despite making the semi-finals last season, the Dutch champions could well find themselves knocked out of Europe completely by the end of the week.