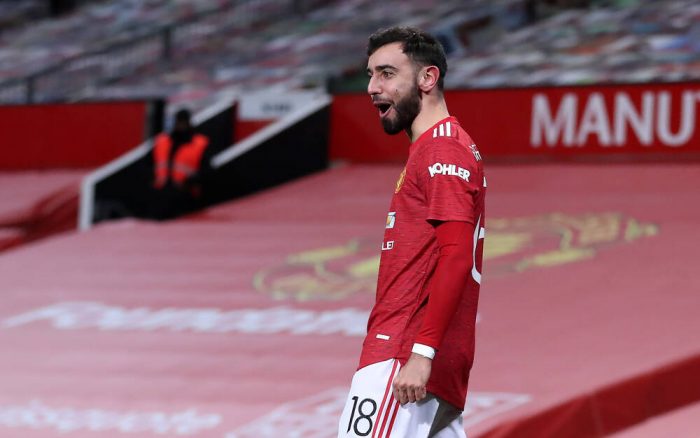 Manchester United continued their fine run of form by beating Liverpool 3-2 in the fourth round of the FA Cup on Sunday. Liverpool had initially taken the lead in the 18th minute courtesy of a sublime chipped finish from Mohamed Salah, but before too long United were back in the game through Maon Greenwood’s composed 26th-minute strike. Marcus Rashford gave the hosts the lead just after half time before Liverpool pegged back United with another assured finish from Salah. All the chances were going Liverpool’s way as the final 20 minutes closed in, but following a lazy challenge from Fabinho on Edison Cavani just outside the box, Bruno Fernandes was on hand to curve the subsequent free-kick around the wall and into Allison’s near corner.

Compared to the dreary display these two sides put out last weekend, their FA Cup meeting could not have bee more different, consistently ebbing and flowing over the course of an enthralling 90 minutes. In the end, it was a game of fine margins, decided largely on experience over youth. Liverpool’s 19-year old centre back Rhys Williams has impressed in recent months covering for the injured Virgil van Dijk, Joe Gomez and Joël Matip, but he struggled against the pace and drive of Marcus Rashford. The Liverpool youngster was at direct fault for Rashford’s goal, miskicking the ball in a rash attempt to clear it first time, sending it directly into the path of the on-rushing United number 10 who cooly finished beyond Allison.

The real star of the show, however, was Bruno Fernandes who emphasised his importance to this United side by scoring once and nearly setting up another in his 24-minute substitute appearance. No Premier League player has scored more goals than him (28) since his arrival in England just over a year ago, with few able to imagine United’s recent title charge without the mercurial Portuguese international in the centre of the park.

Southampton knocked out the holders, Arsenal, by beating them 1-0 at St Mary’s Stadium on Saturday afternoon. Arsenal have looked much improved in recent weeks but were found wanting in front of goal against Southampton, recording just two shots on target from a possible eleven. The game was decided in the 24th minute after former Spurs right-back Kyle Walker-Peters’ low cross was inadvertently knocked into the Arsenal net by Gunners defender Gabriel. Arsenal offered little in response throughout the match, playing without key players Pierre-Emerick Aubameyang, Emile Smith-Rowe and Bukayo Saka — albeit until the promising right-back was introduced for the second half. The Saints’ victory sets up an all-Premier League clash away to Wolves on 10th February, while Arsenal will be left to focus their energies on their dual campaigns in the Premier League and Europa League.

Leicester City avoided the scare of a potential upset against Brentford by coming from behind to win 3-1 away in West London. Brentford took the lead early through a scrambled goal from Mads Bech Sørensen and were able to keep the pressure on Leicester for the opening 45 minutes. But one minute into the second half, Leicester were back on level terms thanks to Cengiz Ünder’s first goal in the FA Cup. Five minutes later, captain for the match, Youri Tielemans, scored his fifth goal of the season from the penalty spot to make it 2-1 to the Foxes, before James Maddison scored his fourth goal in as many games on the 71st minute to round off the match.

Holders Arsenal are out of the #FACup after a 1-0 defeat to Southampton.

Room for a new champion this season 🏆 pic.twitter.com/KFh0rRGTpE

In the Bundesliga, Borussia Dortmund were consigned to their second loss in a row, losing 4-2 away to Borussia Monchengladbach and falling into seventh place as a result. The game between these two old rivals was a thrilling encounter, with both sides taking the lead at least once. Gladbach were the first to score, as Nico Elvedi latched onto Jonas Hofmann’s inviting right-sided free-kick. Dortmund were back level through Erling Braut Haaland’s sumptuous chip and then in front thanks to a thunderous left-footed shot from the 6 foot 3 centre forward.

Dortmund didn’t protect their lead for long, however, as Elvedi was once again able to score from a set-piece. The fastest to react in the Dortmund box after Bürki had palmed the ball into the centre of the box, Elvedi had the simplest of tasks in tucking the ball into an unguarded net. Gladbach finally retook the lead in the second half through a fine right-footed curler from Ramy Bensebaini, before Marcus Thuram rounded off proceedings by heading home the Foals’ fourth on his return following suspension.

The result now means that Dortmund slip down into seventh, thirteen points off top spot and surely out of the title race. Their only hope for this season is a strong second half of the campaign and Champions League qualification before they announce Lucien Favre’s replacement in the summer. Gladbach, however, leapfrog Dortmund and move up into fifth place, just a point behind Wolfsburg in the Champions League qualification spots.

Elsewhere in the Bundesliga, second-placed RB Leipzig were beaten 3-2 away from home by relegation-threatened Mainz. An opening goal and first in the Bundesliga from Leipzig’s American midfielder, Tyler Adams, gave the visitors the lead before a brace from Mainz’s Moussa Niakhaté and a strike Leipzig’s Marcel Halstenberg left the scores level at 2-2 at the break. Mainz’s Luxembourgish midfielder, Leandro Barreiro, then gave the hosts the lead five minutes into the second half, which they never surrendered, holding onto their second win of the season. Leipzig, on the other hand, have now only won once in their last four games and run the risk of letting Bayern Munich run away with the title once again should their form not improve any time soon.

One hell of a game 💥 pic.twitter.com/ItP7HO1nar

Inter Miss Out on First

Inter Milan missed the chance to overtake bitter rivals AC and go top of the table at the weekend as the drew 0-0 with Udinese. On Saturday, AC had lost 3-0 at home to Atalanta, just their second loss all season and one that left them just three points ahead of Inter and with a worse goal difference. But Inter failed to make the most of their opportunity, making little of the 62% possession and four shots on target they had over their north-eastern opponents.

AC, on the other hand, have been suffering something of a wobble in recent weeks, first losing to Juventus in early January and now Atalanta. Both losses have blown the title race wide open with their opponents steadily making up ground. Atalanta’s victory now puts top spot within spitting distance, while Roma’s 4-3 victory over Spezia leaves them well in contention as well.

Another side to have rediscovered some form has been Juventus, who after a dire opening few months to the season, have slowly worked their way up the table, winning four of their last five Serie A matches. Key to that success has been the prolific scoring touch of Cristiano Ronaldo who this week became the highest-scoring player of all time when he scored his 760th career goal against Napoli in the Supercoppa Italiana final. The goal took him beyond Josef Bican’s long-standing record of 759 and into a class of his own, setting a target that will surely take decades to hit.

Halfway through the Serie A season:

Second half of the season could be fireworks 🎇 pic.twitter.com/sI9LQW7fiR