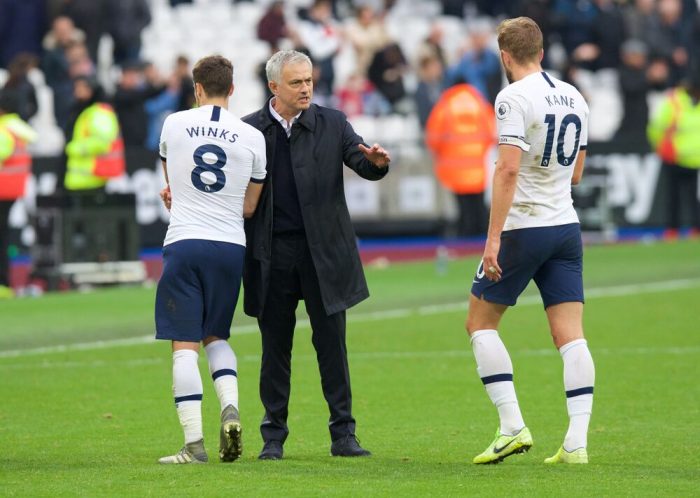 The biggest story in football this week was undoubtedly Tottenham’s decision to sack Mauricio Pochettino and replace him with Jose Mourinho less than a day later. It was a move that shocked the football world and drew a mixed response from fans and the media. While some believe the Portuguese’s winning mentality make him the right man for the job, others see his practical, confrontational style as a bad match for the club.

It remains to be seen which opinion will turn out to be true, but Mourinho’s reign did get off to a good start. His first match as Tottenham boss was away to struggling West Ham, with Spurs running out 3-2 winners. Son Heung-min, Lucas Moura and Harry Kane got the goals, and although they didn’t exactly dominate the game, there were encouraging signs in an attacking sense, particularly in the first half.

While the Portuguese didn’t make any radical changes to Spurs’ formula under Pochettino, there were some early signs of how Mourinho’s Tottenham will look going forward. Eric Dier, previously cast out by Pochettino, was brought into the team to add solidity to the midfield. Lucas Moura was given a start, while Dele Alli looked reinvigorated playing as a number 10 behind Harry Kane. Cristian Eriksen’s stint on the bench continued, with Mourinho saying before the game that he needs to assess the Dane’s mentality before putting him in the team from the start.

One thing that can be counted on is Mourinho introducing a more practical style in an attempt to sort out Spurs’ defensive issues. Those issues were on display on Saturday, with Michael Antonio’s goal in the 73rd-minute breeding uncertainty among the Spurs backline. Angelo Ogbonna’s 96nd-minute goal came too late for West Ham to threaten an equaliser, but Davinson Sanchez’s mistake in letting Ogbonna go free highlighted the kind of problems Mourinho has to solve.

Although the two late goals put a slight dampener on the result, it was definitely a positive day for Spurs and Mourinho. The win was Spurs’ first away from home in the home for 11 months, which was vital. It also moved them up to tenth and level with Manchester United, just two points off fifth. It may take Tottenham fans a while to get used to having Mourinho at the helm, but he’s shown there is reason for optimism.

United and Arsenal fall further behind

The pressure was on Arsenal manager Unai Emery after a run of five winless games, and a home match against struggling Southampton seemed like a good opportunity to get back to winning ways. However, things are rarely straightforward with this Arsenal side, and they could only muster a 2-2 draw. Even that was fortunate, with Southampton squandering a number of excellent chances before Alexandre Lacazette’s 96th-minute equaliser.

The result leaves Emery’s future in serious doubt, with the coach reportedly losing the faith of a number of his own players. It’s been a terrible season so far, with Arsenal now sitting 8th and eight points off the top four. Emery’s switch to a back three has failed to improve the Gunners’ error-prone defence, while they continue to look unconvincing in midfield. Record signing Nicolas Pepe has been dropped following a poor start to the season, while the Granit Xhaka debacle has only made things worse.

It was also a terrible weekend for Manchester United, who drew 3-3 away to Sheffield United. Like Emery, Ole Gunnar Solskjaer went with a back three, but it did little to shore things up at the back. Solskjaer’s reintroduction of Phil Jones to the side looked a particularly odd decision, with the centre-back being outmuscled for the first goal before being hooked at half time. United came back from 2-0 down to lead 3-2, only to concede again in the 90th minute.

12 – Manchester United have failed to keep a clean sheet in their last 12 top-flight away games, their worst streak since a run of 15 in the 1985-86 campaign. Leaky. pic.twitter.com/1QKTUzgrew

While Solskjaer’s job currently seems more secure than Emery’s, the pressure is very much on now that long term United target Pochettino is out of a job. United sit in ninth, a point behind Arsenal, with both clubs now behind Wolves, Sheffield United and Burnley in the league table.

Silva, Pellegrini near the sack

It was another disappointing weekend for two clubs who have ambitions to be competing in the top half of the table. Everton’s results had improved slightly recently after a terrible start to the season, but a 2-0 home defeat to basement club Norwich, who were without a win in seven, brought the Toffees crashing back down to earth. West Ham’s defeat to Tottenham was perhaps more expected, but it now means they’ve gone seven games without a win, picking up two points in that time.

The results mean both Marco Silva and Manuel Pellegrini are being strongly linked with exits, with Silva currently odds on to be the next Premier League manager to go. The Portuguese has failed to impress since taking over despite spending large sums and having a talented squad to work with, and things have gone from bad to worse this season with the club currently sitting in 15th. However, Everton fans will probably not be particularly inspired by the fact that former boss David Moyes is currently the favourite to succeed Silva.

Like Silva, Pellegrini has spent significant funds at West Ham, and the 16th place the Hammers find themselves in simply isn’t good enough considering the players at the manager’s disposal. While West Ham bosses are believed to be reluctant to sack Pellegrini, they are reportedly now considering his future, with Rafa Benitez and Eddie Howe linked with the role. West Ham face Chelsea, Wolves and Arsenal in their next three matches, so things certainly aren’t about to get any easier for Pellegrini.

The top teams have failed to truly hit top form so far this season in Spain, but the La Liga table has a more familiar look to it with Barcelona and Real Madrid first and second respectively. The big two are level on points, with Barca just ahead on goal difference. Ernesto Valverde’s won 2-1 away to Leganes, while Zinedine Zidane guided Real earned a 3-1 home victory over Real Sociedad. Atletico Madrid sit fourth as their mixed start to the season continued, drawing 1-1 away to surprise package against Granada.

Elsewhere in Europe, Serie A leaders Juventus stay top after a 3-1 win away to Atlanta, while challengers Inter kept up the pace by beating Torino 3-0. In Germany, a rejuvenated Bayern Munich beat Fortuna Dusseldorf 4-0 to move a point off the top, following league leaders Borussia Monchengladbach’s away defeat to Union Berlin. Neymar made his return to the PSG side as they beat Lille 2-0 to maintain their eight-point lead at the top of Ligue 1.

West Brom and Leeds move clear at the top

This weekend saw West Brom continue their winning ways to stay top of the Championship, though they were made to work for it by Sheffield Wednesday. Charlie Austin’s 88th-minute penalty secured the three points for the Baggies in what a tightly contested fixture. Fellow promotion hopefuls Leeds also left it late, with a Matty Pearson own goal securing a 2-1 away win against Luton Town. The win means Leeds stay second, two points off the top.

Preston’s run of three consecutive wins came to an end as Alex Neil’s side fell to a 1-0 away defeat to Derby, meaning the Lilywhites slip three points behind Leeds. Below them, Fulham, Nottingham Forest, Swansea and Bristol City sit level on nine points, with Brentford two behind courtesy of a 1-0 home win over Reading.

At the other end of the table, Barnsley were close to earning a point away to Blackburn only to concede in the 86th minute. The result means the Tykes are stuck at the bottom, five points adrift and already looking doomed. Stoke picked up their second consecutive win following Nathan Jones’ sacking, defeating Wigan 2-1 to move within a point of the Latics. Jonathan Woodgate’s struggles at Middlesbrough continued, the 2-2 home draw against Hull meaning the Boro are now winless in ten and just one spot off the relegation zone.