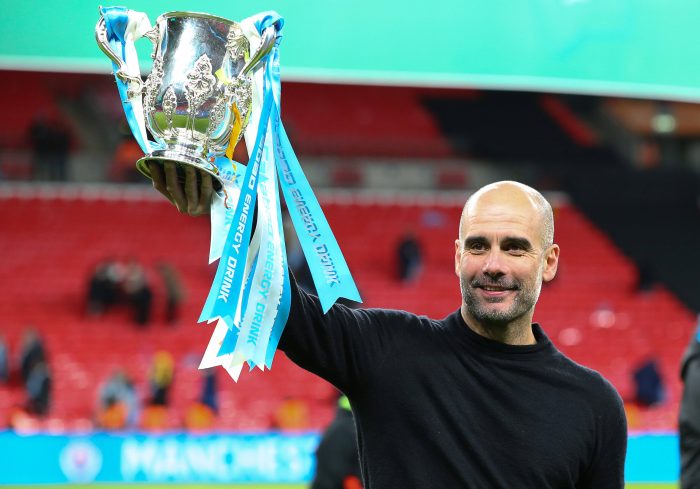 Manchester City made history on Sunday afternoon as they claimed a record-equalling fourth straight League Cup title, beating Tottenham 1-0 at Wembley. The tone of the game was one of total domination for City as they ended the game with 62% possession and a mammoth 21 shots compared to Spurs’ 2. It nonetheless took City 82 minutes to find the back of the net as Tottenham defended heroically in what was only Ryan Mason’s second game in charge of the side. But the breakthrough was finally made by Aymeric Laporte when the Frenchman nodded home a Kevin De Bruyne free-kick.

There are some who would argue that Laporte shouldn’t have even been on the pitch, having committed two bookable offences, but receiving only one yellow card. Whether the Frenchman’s sending off would have influenced the course of the game is unclear, but what is obvious is that City wholeheartedly deserved the victory. They could have had the game wrapped up in the first half alone, as Phil Foden slammed a gilt-edged opportunity hard against the post from close range. Riyad Mahrez’s finishing was also found wanting soon after as he cut onto his left foot before firing across the face of goal from a tight angle. But for all the beautiful football City used to pin Spurs back, it was a simple set-piece that proved to be the difference as Pep Guardiola’s men claimed their first trophy of the season.

The other notable aspect of the tie was that it was played in front of 8,000 spectators. It is the first time since December that a set of fans have been allowed into a stadium to watch their team. The event was one of a dozen others where fan attendance is being trialled in preparation for the national economic reopening on 21st June. Other events in the scheme include the FA Cup final and the World Snooker Championship.

Burnley gave their survival hopes a real boost on Sunday as they ran out 4-0 winners against a Wolves side who looked beleaguered and worn out. Despite an all-round first-class performance from the Clarets, it was Chris Wood who emerged as their star performer. The New Zealand striker bagged himself a hat-trick in the space of 30 frantic minutes for Burnley, claiming 10 goals for the season for the fourth year in a row. His goals were emblematic of a striker playing with confidence, as he managed to find the back of the net with a combination of fine finishing and intelligent movement.

His best goal was arguably his first, however, picking up the ball outside the Wolves penalty area, he drove at Connor Coady, who thought he’d done enough to force him towards the byline. But the Kiwi forward fired a thumping shot across the face of Rui Patricio and into the far left corner. Ashley Westwood then rounded off proceedings in the 85th minute with a piledriver from the edge of the box that gave Patricio no chance. The result leaves Burnley in 14th place, nine points outside the relegation zone and in good form at the most important part of the season. Wolves, however, will look back on 2020/21 as a season to forget. They have felt the absence of talismanic striker, Raul Jimenez, enormously this campaign and, without another solid result in their next five games, their season runs the risk of fizzling out.

Elsewhere in the Premier League, West Brom’s dim survival hopes were almost certainly extinguished when they suffered late heartbreak at the hands of Aston Villa. The Baggies had somehow managed to fight their way back into their game at Villa Park and just after the second half started, they were in the lead thanks to a Matheus Peirera penalty and a Tyrone Mings own goal. But with 92 minutes on the clock, a defensive calamity in the West Brom box saw Keinan Davis pounce on a loose ball to fire Villa level with their West Midland rivals. The result now means that West Brom remain in 19th place, nine points away from safety and with five games of the season remaining.

There was also fresh hope for Newcastle as their Premier League status looks all but safe following their dramatic 1-1 draw with Liverpool on Saturday afternoon. The Reds took the lead early on through an emphatic Mohammed Salah finish in the third minute. But as the game entered it’s closing stages, Jurgen Klopp’s men lost all semblance of motivation and drive. As such, it wasn’t long before Newcastle sniffed out an opportunity to bring the scores level as Callum Wilson drove at the defence and bundled the ball over the line. But after consulting with VAR, it was found that the ball had struck his arm on the way to crossing the line and that the goal would not stand. But mere minutes later, Joe Willock picked up on a loose ball in the Liverpool box and fired emphatically past Alisson to earn the Magpies a vital point.

Athletico Madrid lost yet more ground in the race to the La Liga title when they were beaten by Athletic Bilbao on Sunday evening. Bilbao initially took the lead through Alex Berenguer’s header on the eighth minute, but with just thirteen minutes on the clock, Atleti were back in it thanks to a header from Stefan Savic. The visitors looked to have done enough to secure an important point, but on the 86th minute, Inigo Martinez powered home a thumping header to give Bilbao a famous victory.

The result also means that there are now just two points separating Atletico Madrid, Real Madrid and Barcelona at the top of the La Liga table. Real themselves dropped points when they drew 0-0 with Real Betis on Saturday, but Barcelona made no such mistake, hammering Getafe 5-2 at the Camp Nou. What’s more, the Blaugranes have a game in hand over both Real and Atleti, which means that they could soon overtake a top spot that Diego Simeone’s men have held 24 out of the 33 gameweeks so far this season.

In Italy, Inter Milan moved one step closer to their first Serie A title since 2010 by beating Hellas Verona 1-0. The single goal was scored by Matteo Darmian in the 76th minute, extending their lead at the top of the table to eleven points with just five games to go. Their nearest challengers all season, AC Milan, had been in the driving seat for much of the season, but following a disastrous downturn in form, Stefan Pioli’s side have now slipped to third in the table. With just a handful of fixtures remaining, he must arrest the decline before they slide out of contention for the Champions League places altogether.

Victory for Barcelona will put them top of La Liga for the first time this season.

May 8: Barcelona vs. Atletico Madrid