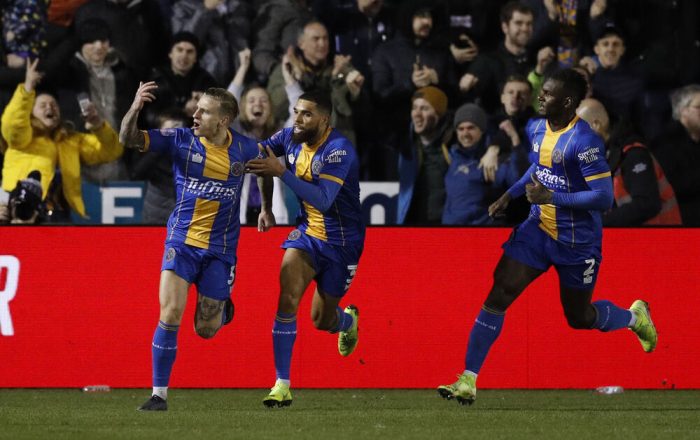 There were a few surprising results in the FA Cup this weekend, but none more so than Shrewbury’s draw against Champions League holders Liverpool.

Jurgen Klopp played a fairly strong team that consisted of a mix of experience and youth, with the Reds taking an early lead through youngster Curtis Jones in the 15th minute. A horror own goal by Shrewsbury wing-back Donald Love just after half-time made it 2-0 and there looked to be little chance of the Shrews coming back.

However, Shrewsbury manager introduced striker Jason Cummings on the hour mark, and it took him just five minutes to make an impact. Cummings tucked home a controversial penalty, young Liverpool full-back Yasser Larouici bringing down Laurent outside the box but there being no VAR in play to review the incorrect decision.

Cummings then added an incredible second just ten minutes later, getting the better of Dejan Lovren from a long ball and striking past Adrian. Shrewsbury weathered the storm as Klopp introduced Mo Salah and Roberto Firmino to secure a memorable draw and a replay at Anfield.

Other FA Cup results saw Chelsea, Manchester United and Manchester City all make the next round, while Tottenham face a replay at Southampton following a 1-1 draw at Saint Mary’s. League One side Oxford held a near full-strength Newcastle to a 0-0 draw at Saint James’s Park, while struggling West Ham were knocked out by former boss Slaven Bilic’s West Brom side.

Chelsea hosted Arsenal in the midweek Premier League fixtures, with Gunners boss Mikel Arteta looking for revenge following the Blues’ smash-and-grab win in December. However, his side were put at a huge disadvantage when ex-Chelsea man David Luiz was sent off in the 26th minute, Jorginho scoring the resulting penalty.

Chelsea proceeded to dominate against their ten-man opponents, but Arsenal showed a resilience so often lacking under former manager Unai Emery, with young Brazilian Gabriel Martinelli equalising in the 63rd minute.

Chelsea continued to threaten the Arsenal goal, eventually retaking the lead when Cesar Azpilicueta poked him in the 84th minute. However, that lead was short-lived as Arsenal proved their resilience once again, Hector Bellerin curling the ball past Kepa to level the scores at 2-2 in the 87th. It was a bitter pill to swallow for Frank Lampard, who’s side really should have secured the win, but Arteta will take lots of positives from the result considering they played over an hour a man down.

Arsenal's captain for the night rescues a point for the visitors with a stunning effort!

What a moment for him! pic.twitter.com/tGc190cqp2

Chelsea’s result gave Manchester United the chance to gain valuable ground in the race for fourth spot, but Ole Gunnar Solskjaer’s side limped to a humiliating 2-0 home defeat to Burnley in the absence of Marcus Rashford. That means Spurs are now level with United on 34 points following their 2-1 win over Norwich, though both sides currently sit six points behind Chelsea.

At the bottom end of the table, Bournemouth got a vital 3-1 home win over Brighton, the Cherries’ first victory in seven league games. They now sit 18th, level on points with West Ham after the Hammers suffered defeat at the hands of Leicester. Aston Villa beat Watford 2-1 in what was a relegation six-pointer, Villa moving to 16th while Watford slip down to 19th.

New Barcelona Quique Setien boss oversaw his second league game in charge of the Catalans, although the trip to Valencia didn’t go to plan. Barca dominated the play but couldn’t find a way through, with Maxi Gomez giving the home side the lead shortly after half-time. Gomez then added a second in the 77th minute, handing Setien his first defeat as Barcelona manager.

It was a significant result in terms of the La Liga title race as it gave Real Madrid the chance to go top. Zinedine Zidane’s side duly took their chance, although they were made it work for it, being held by Valladolid until a 78th-minute header from Nacho secured a 1-0 win. The result means Real go top by a three-point margin and will now be confident of securing a first La Liga title since 2017.

The Bundesliga is commonly derided as a one-team-league, but it’s currently providing what is arguably this season’s most exciting title race. Just four points separate the top four sides, this weekend’s results having made things even tighter.

Borussia Dortmund played on Friday and demolished Koln 5-1, with new signing Erling Haaland continuing his stunning start in the Bundesliga with a brace from the bench. Surprise challengers Borussia Monchengladbach then beat Mainz 3-1 on Saturday to pick up their first win in three games.

It was then over to league leaders RB Leipzig to maintain the gap, but they fell to a surprising 2-0 defeat away to Eintracht Frankfurt, the side’s first defeat in 9-0 league games. That gave a resurgent Bayern the chance to close the gap, with the Bavarians duly responding with a 5-0 battering of Schalke.

Those results mean Leipzig stay top on 40 points, though Bayern are now just one behind, while Gladbach sit third on 38 and Dortmund are two points behind in fourth place. Bayern are probably still the favourites to retain their crown, but there’s no doubt they’re facing the biggest threat to their dominance for several seasons.

There was a shock result in Serie A this weekend, as crisis club Napoli stunned Juventus 2-1 in Naples. Napoli had just one league win from 12 games before this weekend, but second-half goals from Piotr Zielinski and Lorenzo Insigne gave them a 2-0 lead over the current Champions. Cristiano Ronaldo pulled one back in the 90th minute, but it wasn’t enough to prevent the Old Lady from suffering their first defeat in six league games.

Despite that loss, Juve maintain a three-point cushion at the top, seeing as challengers Inter could only manage a 1-1 home draw to Cagliari. Antonio Conte’s men have now drawn three league games on the bounce as their title charge has stalled. That result gave Lazio the chance to go second, but city-rivals Roma held them to a 1-1 draw, bringing Lazio’s stunning 10-game winning run in Serie A to an end.