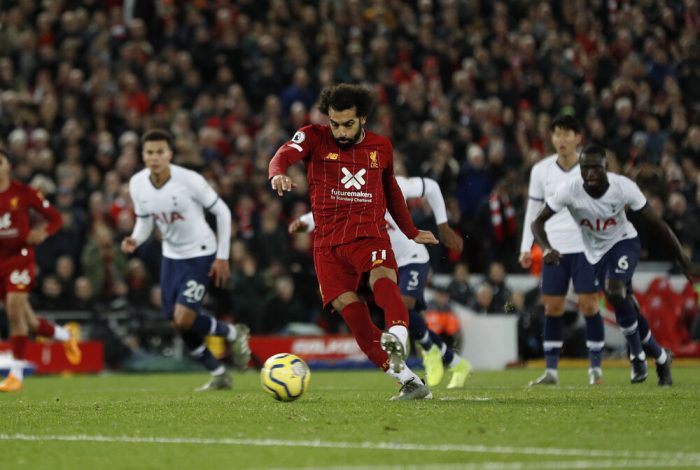 Liverpool faced one of their toughest challenges yet this season, as they welcome Spurs to Anfield on Saturday. While the Reds were strong favourites before the start of the game, a goal from Harry Kane in the first minute of play meant they had an uphill task on their hands.

Liverpool exerted their dominance throughout the game, recording 69% possession and 13 shots on target, though Spurs keeper Paulo Gazzaniga was in impressive form. Jordan Henderson eventually got the equaliser early in the second half, before Mo Salah scored a penalty in the 75th minute after Serge Aurier brought down Sadio Mane.

The result means the Liverpool steamroller shows no signs of slowing done, with Jurgen Klopp’s unbeaten side having won nine of their first ten games. Manchester City are doing their best to keep up, winning 3-0 at home to Aston Villa on Saturday, but the gap remains six points. The match between the top two on the November 10th promises to be a season defining fixture.

It was another bad week for Arsenal, who threw away a 2-0 lead to draw 2-2 at home to Crystal Palace. The Gunners’ much-maligned centre-backs gave them the early advantage, Sokratis and David Luiz both scoring within the opening ten minutes.

However, the defence was once again Arsenal’s undoing, with Calum Chambers first fouling Wilfried Zaha and Luka Milivojevic scoring from the resultant penalty. Luiz then allowed Jordan Ayew to ghost in to score the equaliser

Sokratis thought he’d scored the winner late on, only for the goal to be ruled out by VAR for a supposed foul in the build-up. The fact that Granit Xhaka is in hot water for appearing to swear at jeering Arsenal supporters while being substituted means it was a pretty torrid night all round for Unai Emery.

2 – After winning 49 consecutive Premier League games when going two goals ahead, Arsenal have dropped points in each of the last two matches where they have taken a two-goal lead (also drawing 2-2 v Watford in September). Backbone. pic.twitter.com/ARdtf0qPg4

While there is somewhat of a toxic atmosphere surrounding Arsenal at the minute, there are much more positive feelings at some of their top four rivals. Chelsea moved in to fourth place following their 4-2 win over Burnley on Saturday, with Cristian Pulisic finally making his mark with a perfect hat-trick. The result means Frank Lampard’s young side have now won four Premier League games on the bounce.

However, the big winners of the weekend were Leicester City, who recorded the highest ever Premier League away win in their 9-0 demolition of Southampton. The Foxes sit third on 20 points, just two behind Manchester City, and look to be serious contenders for a Champions League place this campaign.

There were few shocks in the latest round of European fixtures, with the favourites generally coming out on top in the Champions League. The most notable result was Inter’s much needed 2-0 win over Borussia Dortmund, meaning the Italian and German sides now both sit on four points behind Barcelona in the so-called group of death.

Chelsea earned a credible 1-0 away win to last season’s semi-finalists Ajax, courtesy of a late Michy Batshuayi goal. Real Madrid also secured a crucial 1-0 win against Galatasaray in Turkey, giving Zinedine Zidane’s side their first victory in this season’s competition.

After three games the groups are now taking shape, and it’s mostly as you would have expected before the season kicked off. The four English sides all sit in qualifying positions, though Liverpool and Spurs are currently second. Liverpool will hope to claim top spot sitting just a point behind Napoli, but Spurs look unlikely to assail the five-point gap between themselves and Bayern Munich.

Arsenal, Manchester United and Wolves all won in the Europa League, but it was the Scottish sides who really impressed. Celtic earned an impressive 2-1 home win against Lazio, while Rangers gained a vital point away to Porto. Both sides were drawn in tough groups, but with Celtic sitting top and Rangers in second, they’ve given themselves a good chance of making the knockout rounds.

The weekend’s fixtures saw a new name move into the automatic promotion spots in the Championship, as Preston North End moved into second. Alex Neil’s side took advantage of Leeds’ failure to beat Sheffield Wednesday, defeating Blackburn 3-2 at Deepdale. It was quite the comeback, Preston winning 3-2 despite being two down inside the first eleven minutes.

Elsewhere in the Championship, West Brom remain top following a 2-2 home draw against Charlton, while Fulham fell out of the top six after drawing 0-0 away to Middlesbrough. Bristol City took their place, earning a point at home to Wigan, while Swansea won the Welsh derby against Cardiff 1-0 to go fourth.

Towards the bottom, Huddersfield continue to feel the positive impact of manager Danny Cowley’s arrival, moving out of the bottom three thanks to a 2-1 win against Barnsley. Middlesbrough slip into the relegation zone, while Stoke and Barnsley stay stuck in the bottom two spots, both having gained just eight points from 14 league games.

However, while Bayern won 2-1 against Union Berlin, there is a surprise name at the top of the table. Borussia Monchengladbach sit first in 19 points, a point ahead of Bayern, having defeated Eintracht Frankfurt 4-2 at home. Gladbach’s young side have impressed this term, having wisely invested the money gained from Thorgan Hazard’s sale in the exciting talents of Breel Embolo and Marcus Thuram.

Freiburg themselves are another surprise package, sitting in third place and just a point behind Bayern on 17. Wolfsburg are a place behind on goal difference, despite drawing the last two games. While many thought that this year could be one of the more exciting Bundesliga title races, so far it’s the less fancied sides leading the challenge to Bayern’s crown.

There were some surprise results in Italy this weekend, with Juventus drawing 1-1 away to newly-promoted Lecce. The Old Lady are yet to hit full throttle under Maurizio Sarri, with the team not quite displaying the free flowing style the manager is known for. He does seem to be getting a tune out of Paulo Dybala, however, with the Argentine scoring again after netting two in the mid-week Champions League game.

Juve’s slip up gave Inter the chance to reclaim top spot, only for Antonio Conte’s side to draw 2-2 at home to Parma. Inter went from 1-0 up to 2-1 down in the space of seven minutes, though Romelu Lukaku drew them level in the second half. Napoli’s disappointing start to the season continued, with Carlo Ancelotti’s side once again dropping points, this time 1-1 away to SPAL.