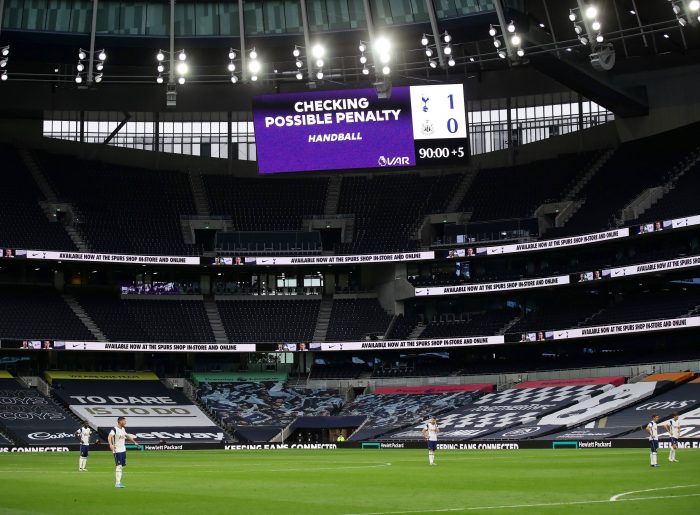 It was a weekend to remember in the Premier League as controversy and goals were in abundance across both Saturday and Sunday. Perhaps the highlight of the weekend, however, was Leicester’s 5-2 drubbing of Manchester City. City had started the game well, with Riyad Mahrez firing home a rocket of a volley from the edge of the Leicester box after just 4 minutes of action. But the Foxes were level by half time following a Jamie Vardy penalty that Leicester’s talismanic forward had himself won. If the first half was a relatively cagey affair, however, then the second couldn’t have been more different. Vardy rounded off his second hat-trick against Pep Guardiola’s City within the first 15 minutes, scoring a cheeky backheeled finish five minutes before converting his second penalty of the match. The goal of the game, however, came on the 77th minute mark as James Maddison picked the ball up from the left hand side of the field and drove forward unchallenged, before firing a thunderbolt of a shot from around 25 yards out into the top corner, leaving Ederson in goal with no chance. City clawed back some pride as Nathan Ake scored on his Etihad debut, but Leicester rounded off the fine victory with a fifth goal as Youri Tielemans converted a third penalty for the Foxes. Leicester will undoubtedly be over the moon having maintained their 100% start to the season in such convincing style, while Guardiola will be left to ponder his side’s calamitous defensive display especially considering the over £400 million he has spent on defenders since he took over the role in Manchester.

Earlier on Sunday, Tottenham’s game against Newcastle also attracted international attention but for all the wrong reasons. A dominant display from Spurs in the first half had seen them 1-0 before the break and it looked as if that was set to be the result at full-time despite a slight drop off in intensity from Mourinho’s men. But Newcastle were able to rescue a totally undeserved point following yet another controversial handball decision. Following a change in the rules from FIFA, penalties are now given if the ball strikes a defender’s arm when their arm is in an unnatural position – regardless of that player’s intention. As such, when Andy Carroll headed the ball into the back of Eric Dier’s arm while Spurs were defending a set-piece, Peter Bankes had no choice but to award the penalty even after he had viewed it on the monitor. Callum Wilson duly tucked the penalty home to steal a point for Newcastle, but the decision attracted a huge amount of criticism, not least of which from the Newcastle manager, Steve Bruce, himself.

There had been a similar incident in Saturday’s 3 o’clock kick-off between Crystal Palace and Everton. With the game locked at 1-1, Digne’s header had struck Joel Ward on the arm from about 3 yards out, leading to a penalty to be awarded to the Toffees. Richarlison’s conversion from the spot would ultimately win the game for Everton, but the result was not the main talking point after the game as Roy Hodgson railed against the rule change, accusing the new law of “killing the game.” Following Sunday’s incident during the Spurs game, these feelings were reflected across the football world as many players and managers took to social media to vent their anger.

Sunday’s action also saw West Ham secure a shock 4-0 win against a Wolves side who looked desperately out of form. Two goals from Jarrod Bowen set the Hammers on their way before the hour mark, while an own goal from Raul Jiminez and a neat header from Sebastian Haller rounded off a convincing victory for the East Londoners. There was also the small matter of a Yorkshire derby in Sunday’s early kick-off, which was a tight tactical contest between Sheffield United and Leeds United. Leeds would eventually come out on top thanks to a late header from Patrick Bamford, but it was a game that Sheffield United will feel aggrieved about losing having put in a fine display from the first whistle to the last.

Roy Hodgson is NOT happy.

He says the new handball law is "killing the game". pic.twitter.com/4qUX343njZ

Saturday’s early kick-off saw Manchester United travel to face a Brighton side who have looked in impressive form since the season restarted and the Seagulls showed just why they’ve been unlucky to pick up only one win from three. For large parts of the game they were all over United and deservedly had the lead in the 40th minute following a beautiful panenka penalty from Neal Maupay. But just before half time, United were back on level terms following a scrambled own goal from Lewis Dunk. United then had the lead after half time as Marcus Rashford charged down Brighton’s right flank, before cutting inside and sitting Ben White down twice to score a fine solo goal. Brighton never gave up, however, and hit the woodwork five times, with Solly March responsible for three of them. But they had their rewards in injury time as March finally put the ball in the back of the United net as he got his head on the end of an Alireza Jahanbakhsh cross. The game was still not finished there, however, as United were given a penalty after the final whistle had been blown courtesy of a Maupay handball. Bruno Fernandes was then able to win the game with the last kick, firing a sumptuous penalty into the top right hand corner to give Mat Ryan in goal no chance.

Chelsea mounted their very own comeback on Saturday evening as they took on West Brom. Despite their recent summer splurge in the transfer market, Chelsea have looked worryingly inconsistent of late and were almost fatally exposed again, this time by Slavan Bilic’s Baggies. West Brom were 3-0 ahead before half time thanks in no small part to some awful defending from Chelsea. Thiago Silva let the ball slip under his feet, giving Callum Robinson the pportunity to steal it from him and score his second of the match, while Reece James fell asleep at the back post during a corner, leaving Kyle Bartley completely unmarked and able to tap the ball home from close range for West Brom’s third. Chelsea, therefore, had it all to do in the second half and were soon back on the right course following a fine Mason Mount finish from a long way out. They grabbed a second as a nice flowing move saw Callum Huson-Odoi and Kai Havertz combine, leading to a neat finish from the young English winger. The equaliser finally came in the third minute of stoppage time as Sam Johnstone saved Mount’s long distance attempt, only to then palm it into the path of Tammy Abraham who duly tapped it home. It was a much improved display from West Brom and a good example of Chelsea’s spirit, but it will still irk Frank Lampard that his side made it so hard for themselves by letting in three totally avoidable goals.

As well as the dramatic Palace v Everton game, there was also action from Burnley and Southampton as the two sides met at Turf Moor in Saturday’s final fixture. Injury hit Burnely were without seven senior players and the lack of reinforcements showed as they fell to a 1-0 defeat. It was the former Clarets man, Danny Ings, who settled the affair in the first 5 minutes, poking home a Che Adams pass into the back of the net to earn the Saints their first victory at Turf Moor in over 50 years. Burnley could have had a penalty themselves, but they were nowhere near their usual best, with Sean Dyche admitting after the game that they “need players” if they want to continue to compete in the Premier League.

It was a busy week in European football as well as in the Premier League, with a whole host of exciting games and controversial decisions seen across the continent. On Wednesday night, Bayern were crowned European Super Cup champions following their 2-1 extra time win over Sevilla. They then followed up this victory with a shock defeat to Hoffenheim on Sunday. Played in a stadium with an actual crowd in attendance, the Hoffenheim fans were able to watch their side walk out as 4-1 winners against the European and German champions in what was Bayern’s first loss for 32 games. There was also a shock loss for Borussia Dortmund who wound up on the wrong end of a 2-0 defeat against Ausburg.

Elsewhere in the Bundesliga, there was the first sacking of the season as Schalke boss, David Wagner, was relieved of his duties just two games into the new season. Having lost 8-0 to Bayern last weekend and 3-1 to Werder Bremen on Saturday, Schalke are now without a win for 18 games, a run that left the owners with no choice to show the former Huddersfield boss the door.

In Spain, there was the culmination of one of the most controversial transfers for years as Luis Suarez joined Atletico Madrid. Pushed out of Barcelona after new manager, Ronald Koeman, had made it clear he was not in his long term plans, Suarez has found a new home under the guidance of Diego Simeone and it hasn’t taken him long to get off the mark, with the Uruguayan registering an assist and two goals on his debut. Back in Barcelona, any suspicions of a growing rift between Lionel Messi and Koeman following the Argentinian’s failed transfer request were put to bed as he scored in Barca’s season opener, a 4-0 win against Villarreal. There was also a win for their title rivals, Real Madrid, who won a 3-2 thriller against Real Betis, with captain Sergio Ramos scoring the decisive penalty in the 82nd minute.