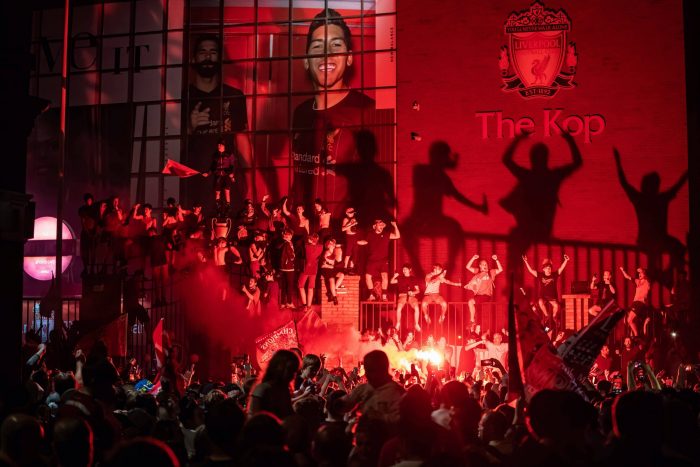 Liverpool’s long 30 year wait for a top flight English title was ended on Thursday night as Chelsea beat Manchester City 2-1 at Stamford Bridge. Only a win could have prevented Liverpool from claiming the title on the night following their 4-0 dismantling of Crystal Palace on Wednesday, but City’s defensive frailties were once again the difference. Christian Pulisic’s 36th minute goal typified everything that has gone wrong at the back for City this season. A defensive mix up on the half way line between Benjamin Mendy and Ilkay Gundogan allowed Pulisic to pounce on to the loose ball, skipping past Mendy’s lunging recovery challenge, before slotting superbly past Ederson. A spectacular Kevin de Bruyne free kick equalised the game 10 minutes after half time, but Fernandinho’s blatant handball on the goal line 20 minutes later meant Willian was able to retake the lead from the penalty spot. With Fernandinho sent off for his hand-ball, a City comeback was almost impossible and all Liverpool had to do was wait for the final whistle to be blown.

It’s the second time in four years that the title has been decided by Chelsea at Stamford Bridge, the first being their 2-2 draw with Spurs in 2016 that gave Leicester their own debut Premier League crown. Jubilant scenes followed on Thursday night as Liverpool fans gathered outside Anfield to celebrate their first English title in a generation. All eyes are now on how they finish the season. They’ve already broken the record for winning the league with the most games to spare (7), but they will surely be looking to beat City’s 100 points mark to become arguably the greatest Premier League side of all time. These credentials will be tested when the new champions face City on Thursday night at the Etihad in what promises to be an electrifying fixture.

Elsewhere in the Premier League the race for Champions League football continued to rage on. 3rd placed Leicester’s shaky return to football continued as they drew 0-0 with Brighton on Tuesday night. It means the Foxes have only picked up 2 points from a possible 6 since the season restart, a run of form that has seen 4th placed Chelsea start to reign them in. Chelsea’s victory over City not only crowned Liverpool, but closed the gap on Leicester to just 1 point. The incoming signings of Hakim Ziyech and TImo Werner have clearly given Frank Lampard’s men the boost they needed going into the final few games of the season and, with upcoming games against relegation threatened West Ham, Watford and Norwich in the coming weeks, their march up the table is showing little signs of stopping. 5th placed Wolves have made one of the strongest returns to the Premier League, winning all three of their games so far. Their comfortable wins against West Ham and Bournemouth were rounded off by a 1-0 victory against Aston Villa in a tight West Midlands derby on Saturday. What’s even more impressive than Wolves’ current form is that their win against Villa was their 50th game this season. Finally, Manchester United’s game against Sheffield United on Wednesday had all the hallmarks of a season defining moment for both sides. A resurgent Manchester United were the stronger of the two, however, as Martial’s first senior hat-trick gave the Red Devils a 3-0 win, compounding a sorry return to football for the Blades in the process.

At the other end of the table the relegation battle entered its final stretch. Brighton’s victory against Arsenal and their draw away at Leicester has largely moved them clear of any trouble, meaning that the scrap for Premier League survival is likely to be contested by five teams. 16th placed Watford had seemingly returned to action positively with their well earned draw against Leicester, but losses to both Burnley and Southampton this week have seen them slump back into the rat race. 17th placed West Ham have been a sorry sight for large parts of this season and their performance against Spurs only continued their fans’ misery. The 2-0 loss means they are now only outside the drop zone by goal difference alone. 18th placed Bournemouth have been on a similarly barren run, having not won a game since beating Aston Villa on 1st February. Their final run-in is one of the worst in the league, with games against Manchester United, Tottenham, Leicester and Manchester City all to navigate before a final game of the season against Everton.

19th placed Villa will have gained some confidence from the quality of their four performances since the restart, but just the 2 points from a possible 12 has not been enough to move them clear of trouble. A final game of the season clash against West Ham on 26th July could prove to be one of the most consequential games of the campaign. And propping up the table in 20th place at Norwich City who, it’s now widely believed, look destined for the drop back down the Championship. Last season’s second tier champions have been in dire form since coming back to action, but the prowess of individuals like Todd Cantwell, Max Aarons and Jamal Lewis should give them some hope that there will at least be a decent financial reward for their foray into the Premier League.

Since 2017-18, Anthony Martial has scored 31 non-penalty goals in the Premier League. 25 of them have either been bottom corner finishes or chips over the keeper.

After nearly four months away, the FA Cup returned to action this week as the competitions quarter finals got underway. The first game of the round was on Saturday as Premier League strugglers Norwich hosted a resurgent Manchester United side. The Red Devils have had a spring in their step since the season restart with the signing of Bruno Fernandes from Sporting proving to be the solution to their attacking woes. With a player willing and able to make things happen in the middle of the park, the United forwards have been in dreamland in recent weeks as Martial’s hat-trick against Sheffield United proved. But it was two fairly scrappy goals that earned United the win at Carrow Road. Odion Ighalo poked home a loose ball inside the 6 yard box to break the deadlock after 51 minutes, before a gorgeous low drive from Norwich’s Todd Cantwell took the game to extra time. Poor defending from Norwich in the dying embers, however, meant Harry Maguire was able to swing a leg from close range and take United through to the FA Cup semi finals for the first time since 2018.

Arsenal were able to resurrect their recent woes by heaping some of it onto Sheffield United instead. The Gunners travelled to Bramall Lane looking to add some silver linings to what has been a sorry domestic campaign. After a stuttering start to life in North London, Nicolas Pepe has been finding the back of the net more regularly for Arsenal and was one hand to give them the lead from 12 yards after Chris Basham clipped Alexandre Lacazette just inside the box. David McGoldrick gave the Blades some hope in the 87th minute by scoring only his second goal of the season, but Dani Ceballos’s tight angle finish in the 91st minute took the tie away from United at the last moment.

18 – Dani Ceballos has scored his first goal in 18 competitive appearances for Arsenal, with his last strike coming in October 2019 versus Standard Liège. Timely. pic.twitter.com/4V9wuUywfK

Leicester hosted Chelsea on Sunday for a chance to play in an FA Cup semi final for the first time since 1982, but their tepid run of form since the season restarted continued. The Foxes started the game brightly with a flurry of chances within the first 25 minutes that kept Chelsea stopper Willy Caballero on his toes. But without the injured James Maddison in the side, Chelsea were able to get a hold on the game through the red-hot form of Christian Pulisic. While the young American did not score he was instrumental in a lot of Chelsea’s most exciting moves, giving fans cause to be excited about how he may line up with summer signings Hakim Ziyech and Timo Werner. But it was Ross Barkley who made the difference in the game, getting on the end of a WIllian cross to score with a tidy first time finish. Chelsea’s victory sets up a mirror of 2018’s semi final as the Blues face off against Manchester United at Wembley on the weekend of the 18th-19th July.

In the final quarter final of the weekend, Newcastle United hosted a Manchester City side still smarting from the loss of their Premier League title just three nights before. City dominated the game in a way that was impressive even for them. Newcastle barely had a sniff as City pinged the ball from player to player in a style reminiscent of Spain’s World Cup winning side of 2010. Ironically though, their first goal didn’t come from open play but from a Kevin de Bruyne penalty following Fabian Schar’s blatant push in the back of Gabriel Jesus. Nonetheless, Newcastle did take the game to City in the second half, playing far more aggressively and engaging the City midfield further up the pitch. But a glaring miss from Dwight Gayle on the 67th minute, opened the door for Raheem Sterling to finish off the tie by stylishly curling a shot past Karl Darlow in goal just moments later. City now move onto the next round against Arsenal, facing the Gunners in an FA Cup semi final for the second time in three years.

The latest rounds of Championship games were full of intrigue and drama this weekend as the race for promotion entered the final stretch. Before the season restart West Brom and Leeds’s positions in 1st and 2nd place seemed unassailable, but after United’s shock loss to Cardiff last week and West Brom’s slip up at Brentford on Friday, the hunt for automatic promotion is back on. Brentford’s 1-0 win over the Baggies means they move up to 3rd, only 5 points behind the West Midland side. Leeds were able to consolidate their position in 1st following a comfortable 3-0 victory against Fulham on Saturday to give them an 8 point buffer over Brentford, but results elsewhere in top half mean that the Bees are not alone in the search for automatic promotion.

Nottingham Forest were frustrated at last weekend’s fixture away at Sheffield Wednesday as the Reds were forced to share the points in a tight 1-1 draw at Hillsborough. Their game against Huddersfield Town on Sunday, however, was anything but. Forest walked out as 3-1 winners on Trentside following a Lewis Grabban brace, moving them up to 4th in the table only 2 points behind Brentford. Fulham’s loss to Leeds saw them drop down to 5th, while Preston’s 2-1 loss to Cardiff saw the two sides swap places as the Bluebirds moved up into the play off places. Meanwhile, consecutive victories for Derby County has meant that Phillip Cocu’s side have charged up the table into 8th and are now well within a chance of grabbing the final play off spot.

Further down the table, victory at Swansea gave Luton hope that they could somehow claw themselves out of the bottom three, while Barnsley’s 0-0 stalemate against Millwall did little to improve their survival chances. Huddersfield’s loss at Forest means that the Terriers slip into the drop zone, swapping places with Hull who managed to grab a point after a crazy 3-3 draw away at Birmingham. Earlier in the week Middlesborough parted company with manager and former player Jonathan Woodgate, turning to Neil Warnock to help guide the Teesiders towards safety and he hit the ground running. Their fixture against fellow strugglers Stoke City couldn’t have been more crucial, with Stoke just 2 points above Boro in the table. A solid 2-0 win for Boro means that the sides swap places, putting them in a healthier position as the final 7 games of the season loom in the view.

All of the angles of @grabbs22's belting first goal yesterday ???? #NFFC pic.twitter.com/3VzF8exgzE