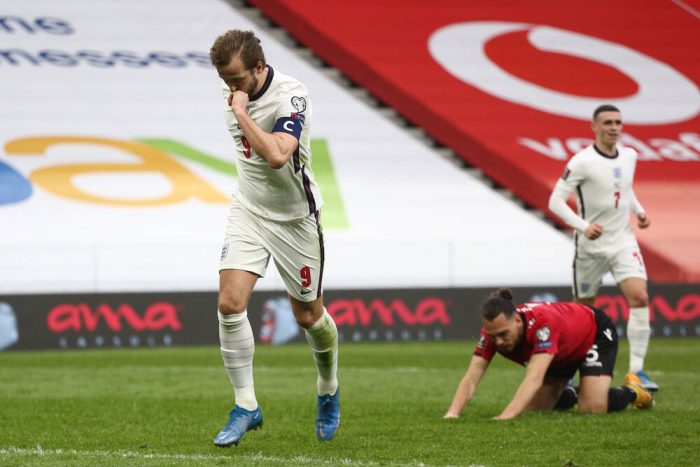 A couple of moments of quality proved the difference in England’s Group I clash with Albania in Tirana as assured finishes from Harry Kane and Mason Mount meant England ran out 2-0 winners at the Air Albania Stadium. The win sees Gareth Southgate’s side take a two-point lead at the top of their group ahead of the visit of second-placed Poland on Wednesday, who will be without talisman Robert Lewandowski through injury.

The Three Lions survived an early scare as their hosts squandered a golden chance to take an unexpected lead when Mason Mount’s misplaced pass inadvertently gifted Albania a two-on-one attack. Napoli’s Elseid Hysaj broke down England’s right side and managed to slide the ball through the legs of the backtracking Kyle Walker to give Myrto Uzuni a clear sight on goal. However, the wide man couldn’t capitalise on what would be Albania’s best chance of the game and his hurried shot flew skywards and over Nick Pope’s goal.

England spent much of the first-half labouring to break down a disciplined Albania side and for all their possession they couldn’t pry their hosts open. But the deadlock was broken in the 38th minute by one of the game’s few moments of genuine quality. Mount regathered a weak Albanian clearance before exchanging passes with Raheem Sterling and teeing up Luke Shaw who delivered an expertly weighted cross onto the edge of Albania’s six-yard area. The ball caught the home side’s defenders flat-footed whilst England captain Harry Kane’s instinctual movement got him in front of Frederic Veseli before he guided a perfectly placed diving header into Etrit Berisha’s net. The strike was Kane’s 33rd England goal and his first for his country for over five-hundred days.

The goal was just what England and the game needed and it became a considerably more open affair afterwards. Both Kane and Phil Foden had efforts foiled by the woodwork either side of half-time before England put the result beyond doubt in the 63rd minute. An overambitious pass from centre-back Berat Djimisti exposed the hosts when it was cut out by Sterling thirty yards from goal. Harry Kane then played in the onrushing Mount who lifted the ball over Berisha and into the net for England’s second. The goal was Mount’s third in his last seven England appearances and the Chelsea man looks increasingly likely to be a starter come this summer’s European Championship.

Southgate and England seemed content with the two-goal lead and saw out the game’s remaining half-hour comfortably, perhaps with one eye on Wednesday’s clash with Poland at Wembley which will surely pose the sternest test of this qualifying campaign.

Elsewhere, Scotland came from behind to take a point in their 1-1 draw against Israel in Tel-Aviv thanks to a second-half strike from Ryan Fraser, whilst Wales secured a 1-0 friendly win over Mexico at the Cardiff City Stadium with Bluebirds striker Keiffer Moore the difference-maker on his home ground.

Northern Ireland manager Ian Barraclough is yet to win in ninety minutes in his ten games at the helm after a 2-1 friendly defeat to the USA, whilst the Republic of Ireland’s Stephen Kenny is also winless in his eleven game reign as his side suffered a shock 1-0 loss to 98th-ranked side Luxembourg. The win was the minnow’s first qualification win away from home since 2008.

Two of Ryan Fraser’s three goals for Scotland have come in his last two appearances.

Starting to make a habit of scoring. 😅 pic.twitter.com/FPWoveATsh

Spain needed a 92nd minute Dani Olmo strike to overcome Georgia in Tbilisi and record their first win of the qualifying campaign. La Roja were held to a 1-1 draw by Greece in their Group B opener on Thursday and things didn’t get off to the best start for them in Georgia on Sunday when Khvicha Kvaratskhelia put the hosts in front just before half-time. But Luis Enrique’s side rallied after the break and they were on level terms when Manchester City’s Ferran Torres was on hand to turn home Jordi Alba’s cross. The home side looked set to take an unlikely point against the former world champions but when Dani Olmo turned and released a looping shot at Giorgi Loria’s goal in the 92nd minute, the Georgian stopper could only palm it into his own net. The action hadn’t yet finished, however, as Georgia were then reduced to ten men in the 94th minute when substitute Levan Shengelia overran the ball and made a lunging shin-high tackle on Jordi Alba.

The win leaves Spain second in Group B behind Sweden who made it two wins from two games since the return of Zlatan Ibrahimovic to the national side. The 39-year-old provided a trademark acrobatic flick to assist Ludwig Augustinsson for the Swedes’ opener in their 3-0 win over Kosovo. Goals from Alexander Isak and former Sunderland man Seb Larsson rounded off the win that puts Sweden top of Group B with a 100% record so far.

Elsewhere there were wins for Germany in Romania thanks to a Serge Gnabry goal, and France over Kazakhstan courtesy of a goal from Barcelona’s Moussa Dembele and an own goal from Serhi Malyi. Denmark recorded an emphatic 8-0 win over Moldova in Copenhagen with Nice’s Kaspar Dolberg and Atalanta’s Mikkel Damsgaard scoring a brace each, the latter on just his second appearance for the national side.

Chelsea and City Make it Five on the Bounce

Both league leaders Chelsea and second-placed Manchester City made it five wins in a row without conceding in the Women’s Super League. City were 1-0 winners over Reading on Saturday thanks to a late goal from Chloe Kelly. The victory made it eleven consecutive league wins for Gareth Taylor’s side, who haven’t conceded a goal since their 2-1 win over Arsenal on the 7th February, and saw them briefly take top spot ahead of Chelsea’s game on Sunday.

Chelsea responded by retaking top spot with a 2-0 win over Aston Villa. A brace from Australia captain Sam Kerr was enough to see off Villa at Kingsmeadow meaning that Emma Hayes’ side remain on course to retain the WSL.

The Blues took the lead in the 24th minute when Fran Kirby turned and lofted a measured ball into the Villa area where Kerr rose highest to glance home a header. Kirby nearly laid on a second minutes later when she intercepted a lax Villa pass and then slid Kerr through on goal only for the striker to be denied by Villa stopper Lisa Weiß. And it was that same combination that eventually led to Chelsea’s second goal. After some hesitation between Weiß and defender Asmita Ale, the keeper’s deflected clearance landed at the feet of England international Kirby who was able to tee up Kerr for a delightfully weighted finish into the far corner. The strike was the prolific Australian’s fourteenth league goal of the season and leaves the Blues two points clear at the top of the WSL going into the final four gameweeks.

Elsewhere there was a win for Arsenal over Spurs in the North London Derby where the Gunners emerged as 3-0 winners over their fierce rivals. Goals from Caitlin Foord, Vivianne Miedema and Katie McCabe gave the fourth-placed Gunners a crucial win and moved them to within three points of Manchester United with a game in hand. United were also winners at the weekend after a 2-0 victory over bottom club West Ham. Two goals in six second-half minutes from Lauren James and Christen Press were enough to sink the Hammers and keep United on track to qualify for a first-ever Champions League campaign.