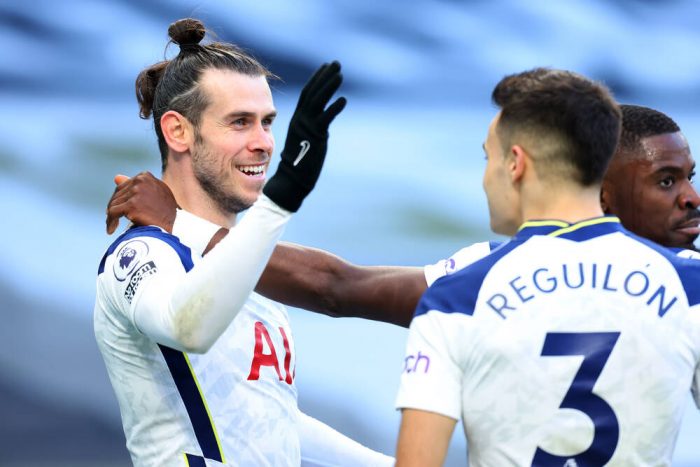 Tottenham returned to winning ways on Sunday as they emerged as emphatic 4-0 winners over Burnley. An inspired Gareth Bale led the Lilywhites to victory as the Welshman netted twice and recorded one assist to make it seven goal involvements in his last four games. An unusually lacklustre Burnley allowed him full run of The Tottenham Hotspur Stadium and the Clarets were subsequently punished for their slow start early on, with Bale netting the opener within the first two minutes. Bale then turned provider 13 minutes later, firing an inch-perfect ball over the Burnley defence to find Harry Kane who needed no second opportunity to fire home an emphatic finish. Lucas Moura then rounded off a dominant first half by netting his third Premier League goal of the season to give Spurs an unassailable 3-0 lead. Bale was then on hand to rub salt in Burnley wounds as he scored his most stylish goal this season, collecting the ball on the edge of the Burnley box before cutting inside to fire home past a hapless Nick Pope.

The win moves Spurs back up to eighth in the table, but still six points away from the top four. Burnley, however, remain in fifteenth, maintaining their precarious position just above the relegation zone.

Earlier on Sunday, Arsenal continued their fine run of form by recording an assured comeback-win against Leicester. Youri Tielemans initially gave the Foxes the lead in the first six minutes, making the most of some pitiful Arsenal defending. The Belgian international was allowed to waltz over 40 yards down the pitch before firing past Bernd Leno in goal. But Arsenal had the lead before the half time whistle was blown courtesy of a fine David Luiz header and an emphatic Alexandre Lacazette penalty. Nicolas Pépé then continued his recent goal-scoring run by adding a third for Arsenal and rounding off a convincing win for the Gunners. The win leaves Arsenal in tenth, seven points off a Europa League spot while Leicester remain third but on a tricky run of form having been knocked out of the Europa League by Slavia Prague on Thursday.

Liverpool finally amended their dismal domestic run on Sunday when they beat bottom club Sheffield United 2-0 at Brammall Lane. United put in a spirited display on the night, with goalkeeper Aaron Ramsdale performing heroically to defy all comers. But in the end, it was two slices of good fortune that gifted the Reds a first league win in five. Curtis Jones’ opener followed a Trent Alexander-Arnold cutback that most Sheffield United defenders thought had gone out of play, only for the replays to show not all of the ball had crossed the line. Liverpool’s second and Roberto Firmino’s sixth of the season sealed the win, but only after taking a significant deflection off defender Kean Bryan. Liverpool are now just a point outside the Europa League places, while Sheffield United’s fate is looking more certain with every passing week, with the Blades now 15 points adrift of safety with just 12 games left to play.

Manchester City continued their seemingly unstoppable charge to the title as they completed their 20th win in a row by beating West Ham 2-1. The Hammers have been in seriously good form of late and well deserve their position in the Champions League spots. But they were no match for a City side basking in some simply glorious form. Both of City’s goals came from their central defenders as Ruben Dias headed home his first goal for the club before John Stones fired home a striker-like finish 30 minutes from time. West Ham had pulled the game level just before half time through Michael Antonio, however, demonstrating all the fight and spirit that has pushed them so far up the table this season.

There was fresh VAR controversy this weekend during West Brom’s vital 1-0 win over fellow relegation contenders, Brighton. West Brom had taken the lead through captain Kyle Bartley’s close-range header, but just as the half was winding down, Brighton were awarded a free-kick on the edge of the West Brom box. Lewis Dunk decided to take advantage of the Baggies’ poor organisation and took it quickly. But despite referee Lee Mason blowing the whistle to let the shot be taken, he panicked and blew his whistle a second time. Under apparent instruction from his VAR counterpart, he initially gave the goal, but then upon secondary review, he was forced to overrule his decision because the ball had not crossed the line before he blew his whistle. Nonetheless, West Brom held onto the lead, despite Brighton striking the woodwork from two separate penalties.

Fresh questions will be asked of the influence of VAR on not just the flow of the game but on the standard of refereeing. With every move match officials make scrutinised in-play, the increased pressure of VAR is seemingly having an effect on the mindset of referees.

There was also a much-needed win for Aston Villa against Leeds whose European hopes were beginning to flitter away following their run of just one win in February. A glorious first touch from Anwar El-Ghazi saw him in acres of space inside the Leeds box, giving him the perfect opportunity to send Villa into the lead within the first five minutes. Villa held on heroically until the final whistle, recording just 31% possession to earn a significant win in their hunt for a return to European football for the first time in 10 years.

There was also a 1-1 draw between Wolves and Newcastle. The point is particularly precious for Newcastle who will have been more than aware of the recent uptick in form of fellow strugglers Fulham and West Brom. Wolves, however, remain in 12th and will most likely be looking to the off-season in order to regroup and mount a serious European push next campaign.

RB Leipzig kept the pressure on Bundesliga leaders, Bayern Munich, by beating Borussia Mönchengladbach 3-2 in a dramatic comeback win. The Foals initially had a two-goal advantage in the first half, courtesy of a Jonas Hofmann penalty and Marcus Thuram header. But Julien Ngalesmann’s men dug deep and by the 66th minute, they were right back in it. Christopher Nkuku got on the end of a fine move to bring the scored to 2-1, before Yussef Poulsen fired a superb long-range effort beyond Jan Sommer in goal to make it 2-2. The crowning moment for the east German side came in the third minute of stoppage time as Alexander Sörloth rose highest to nod home a glorious header. Leipzig are now just two points behind Bayern, despite the Bavarian side’s emphatic 5-1 win over FC Köln. If their current forms continue, then the meeting between Germany’s top two teams on 3rd April could well be the title decider.

There was another win for Atletico Madrid in Spain’s La Liga on Sunday as they beat Villarreal 2-0 to maintain their five-point lead at the top of the table. An own goal from Alfonso Pedraza and Joao Felix’s seventh league strike of the season was the difference in the end as Atleti bounced back from their midweek loss to Chelsea in the Champions League. Next week’s Madrid derby gives Real Madrid the chance to cut down their local rivals lead to just two points and eliminate their game in hand advantage in one fell swoop. All eyes will therefore be on Diego Simeone and co. to see whether they can stand the heat.

And in Italy, Inter maintained their lead at the top of the Serie A table by beating Genoa 3-0. It was all an ex-Manchester United display for Internazionale as Romelu Lukaku, Matteo Darmian and Alexis Sanchez netted all three of their goals in a dominant display. Arch-rivals AC returned to winning ways by beating Champions League hopefuls Roma 3-1 at the Stadio Olimpico. But with a four-point game to make up as the season enters its final stretch and Inter look as assured as ever, there is limited hope for Stefano Pioli’s men.