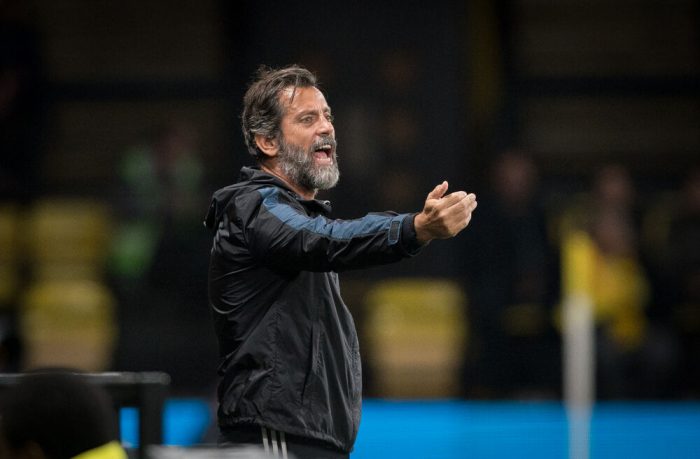 The Premier League’s two basement clubs faced off this weekend, with both Wolves and Watford looking for their first win. It was Wolves who came out on top with a 2-0 victory, courtesy of a Matt Doherty strike and a Daryl Janmaat own goal.

Nuno Espirito Santo switched things up a bit, dropping Ruben Neves to the bench and going for a two-man midfield, rather than the usual three. Adama Traore and Pedro Neto supported Raul Jimenez, and despite Watford dominating possession and having 14 attempts to Wolves’ six, it was the Molineux side that came out on top.

The result pushes Wolves up to 13th, while Watford remain bottom with just two points, three behind 19th-placed Newcastle. It really is a worrying start for the Hornets. Watford impressed in new boss Quique Flores Sanchez’s first game against Arsenal, but then proceeded to lose 8-0 to City prior to the Wolves’ result.

It’s still early days, but the Premier League is unforgiving and Watford are in desperate need of their first win. The longer the wait goes on, the harder it will be to claw back ground on the teams above them.

The Carabao Cup was back in action in midweek, and there were one or two shocks. Tottenham were the first big side to suffer, going out on penalties after a 0-0 draw away to League Two side, Colchester United. West Ham then outdid their London rivals by suffering a humiliating 4-0 loss at the home of League One’s Oxford United.

Sheffield United also suffered a home defeat to Sunderland, while Manchester United only just scraped past League Two side Rochdale, getting through on penalties after a 1-1 draw. Manchester City, Liverpool, Arsenal and Chelsea were among the other top tier sides to progress.

The draw for the next round has set up for some tasty looking games, with Chelsea at home at Manchester United and Liverpool playing Arsenal at Anfield. Crawley Town will also face off against Colchester, meaning there will be at least one League Two side joining the big guns in the quarter-finals.

This weekend saw a new team take the top spot of the Championship table as West Brom ran out 2-0 winners away to QPR. The Baggies are now the only team still unbeaten in the division, with Slaven Bilić’s side having accumulated 19 points. Next up is fifth place Leeds, who suffered a surprising 1-0 defeat away to Charlton, meaning the Addicks rise into the play-off positions.

That loss meant Leeds were leapfrogged by Nottingham Forest who came out on top against Stoke by a 3-2 scoreline. The Potters remain rooted to the bottom of the table, already 6 points from safety, with pressure increasing rapidly on Nathan Jones.

The worst win percentage in the club's history of managers who have managed 15+ games ?#SCFC pic.twitter.com/hLAiTv2f3D

Other notable results saw Danny Cowley pick up his first point for Huddersfield, holding Millwall 1-1 to end a dreadful run of seven straight defeats. Cowley’s former team Luton earned an impressive 2-1 win away at Blackburn, while Derby managed to put the drink driving storm surrounding the club to one side and beat Birmingham 3-2, a much-needed victory for boss Phillip Cocu.

The first Madrid derby saw Diego Simeone and Zinedine Zidane’s sides play out a 0-0 draw at the Wanda Metropolitano. The match saw both teams’ new no. 7s face-off, though neither really stood out after difficult starts to their respective careers.

João Felix had a good chance in the first half which he dragged wide, while Eden Hazard again looked short of match fitness and far from his best. Both are still settling, but the expensive pair are already finding that there’s little patience for poor form in the Spanish capital.

The result keeps Real top on 15 points, while Atletico sit in third on 14 points and Barcelona have 13 following their 2-0 win against Getafe. Granada remain this season’s surprise package, the newly-promoted side sitting pretty in second after a 1-0 home win against bottom club Leganes.

AC Milan’s torrid start to the season continued as they were defeated 3-1 at home to Fiorentina. It was the Rossoneri’s third defeat on the bounce, leaving the 18-time Serie A winners sitting in 16th place with just 6 points on the board – their worst start since 1938. According to reports, manager Marco Giampaolo is now nearing the sack and could go if he doesn’t get a result in the next game against Genoa.

While the red half of Milan is in turmoil, the story for their cross-city rivals couldn’t be any more different. Antonio Conte’s Inter maintained their 100% record, beating Sampdoria 3-1 with Alexis Sanchez scoring his first goal before being sent off. The result means Inter remain top ahead of Juventus, the Nerazzurri looking the real deal this season.

With Inter now having won the last three Milan derbies— last losing in December 2017— the gap between these two storied clubs has rarely been larger.

Neymar proves his point with another winner

It’s fair to say that Neymar’s reputation, both on and off the pitch, has taken somewhat of a beating in the last couple of seasons. Significant time spent injured, play-acting and his pushing for a move back to Spain have all seen the Brazilian’s effectiveness and character called into question. However, if anyone had doubts about his ability, Neymar has gone about proving them wrong since his return to the PSG team.

Saturday’s fixture against Bordeaux was the third time in the last four Ligue 1 games in which Neymar has scored the winner in a 1-0 victory for PSG. This goal wasn’t as spectacular as the strikes against Strasbourg and Lyon, but it was a vital one nonetheless for a PSG side that have struggled to hit full speed so far this season. Based on the early evidence, it looks like keeping Neymar will be vital to PSG’s hopes of going far in the Champions League.