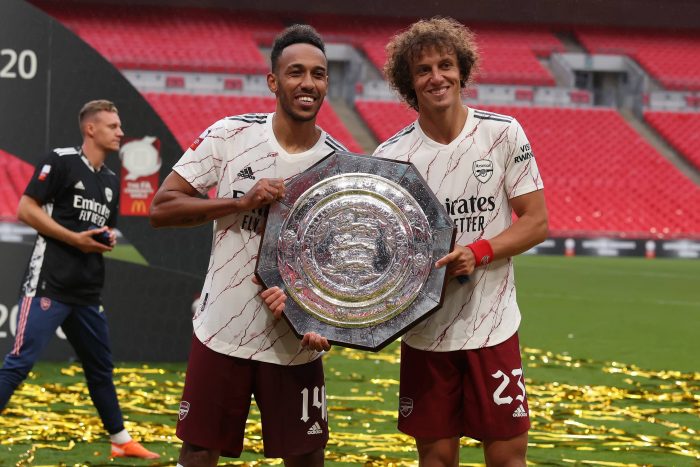 The annual curtain raiser to the season, the FA Community Shield, was won by Arsenal for the 16th time in their history on Saturday, as they overcame newly crowned Premier League champions Liverpool. Liverpool fielded the far stronger side, with only Trent Alexander-Arnold and Jordan Henderson missing out, but they stuttered against an Arsenal team rejuvenated under Mikel Arteta. But despite the quick turnaround since the end of the 2019/20 season, both sides approached the game rustily. It was nonetheless a tight affair, with it difficult to predict a winner throughout.

Liverpool had the best of the early chances. Van Dijk had the ball in the back of the net following an Andy Robertson set piece only for it to be ruled offside, while James Milner should have buried his headed chance when a Nico Williams cross found him unmarked just around the penalty spot. But as is always the case, after Liverpool had failed to take their chances, Arsenal went straight up the other end and took there’s. A wonderful display of playing out from the back was rewarded with a stunning strike from Arsenal’s talismanic forward, Pierre-Emerick Aubameyang. The Gunners had worked the ball stylishly down the right hand side to find their new number 7, Bukayo Saka, in an advanced position. His elegant switch ball landed at the feet of the Arsenal captain in an unassuming position on the left flank, but after swiftly cutting inside Williams, he bent a stunning shot past Alisson in goal.

The exciting young forward, Eddie Nketiah, led the line for Arsenal during the game and had two gilt-edged first half chances to prove his worth with the new season just two weeks away. But the sparkling form he found himself in during his loan spell at Leeds United couldn’t be replicated as he failed to place his first effort far enough away from Alisson and skied his second far over the Liverpool goal.

The second half, however, was all about Liverpool as the Reds tried desperately to find a way back into the game. But the champions looked slow and unable to move out of second gear. The usually deadly Sadio Mane worked himself into a one on one position against Emi Martinez twice during the game, but couldn’t find the composure for either opportunity. All the first chance needed just a delicate flick to take the ball over the onrushing goalkeeper, while the second lacked the instinctive first touch so prevalent in the Senegalese forward’s finishing. But it was Takumo Minamino, the Japanese midfielder signed from RB Salzburg, who equalised for Liverpool with his first goal for the club. A tight piece of interplay saw the ball bobble around on the edge of the box, with it eventually landing at the feet of Minamino who thumped it resoundingly past Martinez.

With the two sides locked together at 1-1 and the game edging towards penalties, Rhian Brewster was brought on for Gini Wijnaldum to add more firepower to Liverpool’s spot kick options. But it was heartbreak for the 20-year old who hit the bar, leaving the door open for Arsenal to grab the advantage. As the shootout came down to the final penalty, Auybameyang stepped forward to send Alisson the wrong way and claim the Community Shield for Arsenal.

Despite the trophy’s limited stature, Arteta will see the win as a major achievement for his side. They were not only clinical in attack, but dogged in defence, with Ainsley Maitland-Niles putting in such a fine performance at wing back that Arteta has had no choice but to cancel his proposed move to Wolves. The only real piece of business the Gunners need to finalise now is Aubameyang’s new contract which has dragged on all summer.

Liverpool, however, will be left to rue missed chances. They made some decent opportunities, but they looked slow and second best in most areas of the pitch. The supposedly imminent arrival of Thiago from Bayern Munich will certainly add some dynamism to their midfield, but with both Wijnaldum and Naby Keita perfectly capable options in the middle of the park, the question of who would have to make way rises to the top of the agenda.

Last week the football world was stunned as Lionel Messi handed in a transfer request to leave Barcelona following on from Barca’s humiliating 8-2 loss at the hands of European champions Bayern Munich. Sent via a now infamous burofax, the Argentine sought to invoke a clause in his contract that would allow him to leave for free. The deadline for that clause was 10th June, but because the coronavirus pandemic forced him to play deep into August, his lawyers are arguing that this deadline is no longer valid. As of a statement from La Liga this weekend, however, Spanish football’s top division has decided that the forward’s initial release clause of €700m (£624m) is in fact still valid meaning that, at the moment, he is unable to leave on a free.

While the €700m fee is impossible to finance for any potential suitor, it is undeniable that Messi wants to leave Barcelona. As well as handing in a transfer request, he failed to turn up for a pre-season medical on Sunday. As such, it is likely that he will be bought by another side somewhere around the £200m mark. His wages of £60m will also have to be supported, however, meaning that there are a very select few teams who can actually afford to take him off Barca’s hands. His wages are in fact the key reason why the Barcelona hierarchy will not be too sad to see him go. The Catalan giants have run up enormous debts under the leadership of their current president Josep Maria Bartomeu, racking up a wage bill of €500m – the largest in all of world sport.

The favourite to grab the Argentine’s signature is Manchester City, where a reunion with Pep Guardiola presents Messi with a particularly favourable alternative to the toxic culture at Barca. Several high profile figures in both Messi’s and Barca’s camp have indicated that City is his favoured destination, with Barcelona presidential candidate Toni Freixa stating that it is “likely” that Messi will be playing in the North West next season.

La Liga confirmed that they side with Barcelona on Lionel Messi's contract dispute, stating his current contract is still valid and interested clubs must pay his €700m release clause.

La Liga and the Barca board: pic.twitter.com/41Def45XgC

On the surface, the only real issue for City is the cost of the transfer. While a fee somewhere around the £200m mark is indeed achievable for them via ammortisation, shouldering his wages on top of that will come at enormous yearly expense for the recently dethroned Premier League champions. As part of a recent study into the finances of a potential Messi-City transfer from The Athletic, it was calculated that if City were to sign Messi on five-year deal similar to his current contract at Barca, a £100m transfer would cost them £80m a year, a £150m transfer would cost £90m a year, a £300m transfer would be £120 a year and the preposterous £635 transfer fee Barca are demanding would come to £187m a year.

This is no small task for City who were under the microscope of Financial Fair Play no less than two months ago. With recent arrivals Nathan Ake and Ferran Torres signed for a combined cost of £60m and the rumoured arrival of Kalidou Koulibaly likely to set them back somewhere in the realm of £50m, many are beginning to wonder whether the funding behind their current project is entirely legitimate. But according to football finance expert Kieran Maguire, author of The Price of Football, City are actually in relatively clear financial water.

“From an FFP perspective, they’re fairly strong,” Maguire says. “City have made profits of £1 million, £10 million and £10 million in the last three years, and that’s before taking into account the exemptions that UEFA allow for FFP purposes…For the 2016-19 period, City have an FFP ‘profit’ of about £107 million, compared to an allowable loss of €30 million (£26.8 million), so there’s plenty of wiggle room available going forward.”

City are in arguably the strongest position to sign Messi. Financially they can probably manage it and they have the favour of the great man himself, but they will still face stiff competition from other financial heavyweights such as Paris Saint Germain and Inter Milan who are both still smarting from their respective European failures. Nonetheless, wherever Messi decides to go next season, it is set to be box office. While crowds may still be a thing of the future, the commercial revenue a club would accrue from having arguably the greatest to ever play the game join their ranks would be immeasurable.

A young fan waited for Messi to show up to Barca's pre-season training ? pic.twitter.com/AjYfOXqLZF

Lyon won the Women’s Champions League on Sunday, beating German champions Wolfsburg 3-1 in San Sebastian. Played as part of a nine day mini tournament in Northern Spain, this year’s Champions League is the first competitive football many of the players had been involved in since the WSL was called off due to coronavirus. It was Lyon’s fifth straight Champions League title and seventh in nine final appearances since 2010, rounding off a decade of total domination in Europe for the French side.

Lyon were pushed onto the final by a squad littered with England internationals, none more high profile than left back Lucy Bronze who finished the evening with her third consecutive European title. Jodie Taylor and Alex Greenwood came off the bench during the game to help push Lyon over the line, while forward Nikita Parris was forced to miss the profile through suspension.

The game itself was largely decided in the first half, with goals from Eugenie le Sommer and Saki Kumagai giving Lyon control of the game early on. A goal from Alexandra Popp just after half time gave Wolfsburg hope of an unlikely turnaround, but after le Sommer’s late strike cannoned off the post and then off former Wolfsburg defender, Sara Bjork Gunnarsdottir, Lyon had the breathing room they desired.

Sunday’s final was the fourth meeting in seven years at this stage of the Champions League for the two sides, with Lyon now having won three of them. As if the point of Lyon’s monopoly over European football needed proving any more, it was also the fifth consecutive victory for the French side over Wolfsburg in the Champions League. Their win means that Lyon will go down as one of the greatest sports teams in history, executing an era of domination and consistency of style rarely seen at football’s elite level.