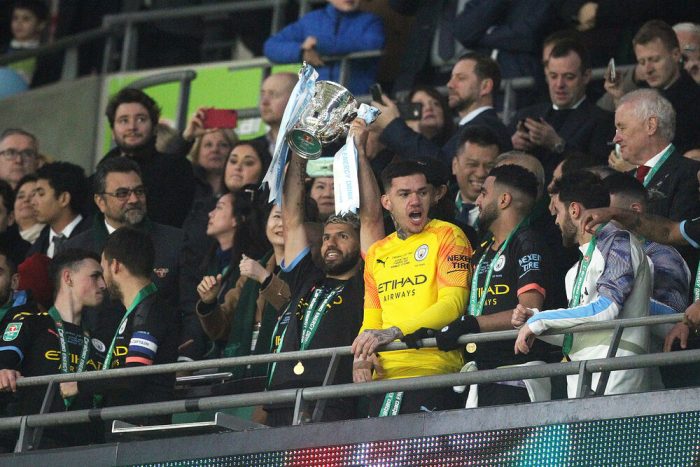 The League Cup final took place on Sunday, with Manchester City looking to secure their third consecutive trophy against Aston Villa, who were aiming to win their first major domestic trophy since they won the competition in 1996.

City were overwhelming favourites to beat relegation-threatened Villa, and it took Pep Guardiola’s side just 20 minutes to take the lead, with Sergio Aguero putting his side in the lead Midfielder Rodri then heading in a corner to make it 2-0 with half an hour again, leaving Villa an almighty mountain to climb.

Dean Smith’s side certainly gave it a good go, with January signing Mbwana Samtta pulling one back shortly after half time following a John Stones error. Villa pushed for an equaliser and had their chances late on, but City held out for the win and claimed their first silverware of the season courtesy of a 2-1 victory.

With the league title as good as wrapped up, attention had turned to whether Liverpool could match Arsenal’s Invincibles achievement of 2003/04 and go an entire Premier League season unbeaten. Jurgen Klopp’s side certainly looked more than capable of doing so, having shown a resilience befitting of Champions throughout the season.

However, that unbeaten run came to an end in surprising circumstances this weekend, Liverpool losing 3-0 away to Watford. French forward Ismaila Sarr gave the home side a shock lead in the 54th minute and then doubled their advantage on the hour mark, with Troy Deeney rounding things off in the 72nd minute.

Liverpool now need to regroup ahead of the FA Cup match versus Chelsea tomorrow and the crunch Champions League fixture against Atletico next week.

The goals that ended Liverpool's chance at invincibility ?pic.twitter.com/mTfCI1cEzX

This season has seen the race for fourth spot blown wide open due to the poor form of the likes of Chelsea, Manchester United and Spurs, and this weekend was another in which several Champions League hopefuls failed to capitalise on their rival’s shortcomings.

Third-place Leicester City were first up on Friday, hoping to stop their poor run of form away to bottom club Norwich. However, the Canaries secured a 1-0 victory courtesy of a Jamal Lewis strike, leaving Leicester without a league win in four and at real risk of being dragged into the battle for fourth despite previously looking like having a Champions League place wrapped up.

Chelsea then travelled to Bournemouth on Saturday, looking to respond after their 3-0 drubbing at the hands of Bayern Munich in midweek. Marcos Alonso gave the Blues the lead, but Bournemouth scored twice within three second-half minutes to go 2-1 up. Alonso struck again in the 85th minute to level things up and should have won the match in injury time, but his wayward header meant the game ended 2-2.

That result gave Manchester United the chance to go level on points with Chelsea, but a David de Gea howler three minutes into the match against Everton allowed Dominic Calvert-Lewin to give the Toffees an early lead. January signing Bruno Fernandes continued his impressive form by equalising in the 31st minute, though United failed to find a winner meaning they still sit three points behind Chelsea.

Not the result that we wanted but we’ll keep fighting to improve! Thank you for the amazing support today in the stands reds ? Time to rest and get ready for the FA Cup ?? @premierleague @ManUtd pic.twitter.com/8QpF84RIik

Finally, Tottenham and Wolves faced off on Sunday afternoon. A goal from Serge Aurier on the stroke of half time sent Spurs into the break 2-1 up, following earlier goals from Steven Bergwijn and Matt Doherty. However, Digo Jota and Raul Jimenez turned things around in the second half, securing the away side a 3-2 victory which saw Wolves leapfrog Spurs into sixth, leaving Jose Mourinho’s side languishing in seventh and five points off a Champions League spot.

The big winners were certainly Wolves, who now sit sixth, level with United and just three points off Chelsea. With the big guns continue to stumble their way to the finish line, Nuno Espirito Santo’s side have a real chance of causing an upset and stealing that precious fourth spot.

Since joining Wolves at the beginning of last season, Raul Jimenez has:

– Scored 39 goals.
– Assisted a further 18.
– Helped them reach the last 16 of the Europa League.
– Become Wolves' all-time top goalscorer in the Premier League.

Sunday evening saw Real Madrid host Barcelona in El Clasico, with the prize for the winner being a place atop the La Liga table. Both sides were missing big players through injury, with Real without Eden Hazard while Luis Suarez and Ousmane Dembele were out for Barca.

Barca had the best of the chances in what was a cagey first half, with Thibaut Courtois making a couple of big saves to keep the Catalans out. However, Madrid came out strongly in the second half and eventually made the breakthrough in the 71st minute, with Brazilian teenager Vinicius putting Zinedine Zidane’s side ahead.

Both sides had good chances as the game progressed into its closing stage before substitute Mariano sealed the win for Real by making it 2-0 in injury time. The win was Madrid’s first in a Clasico in eight attempts and means Zidane’s side returns to the top of the table, a single point above their fierce rivals.

Last week saw the second set of last 16 first leg fixtures take place in the Champions League, and Chelsea were the English side up first, hosting Bayern Munich at Stamford Bridge. Many predicted a difficult night for Lampard’s inconsistent side, and it proved true almost immediately, Thomas Muller testing Chelsea ‘keeper Willy Caballero in the first minute. Bayern dominated the first half, with Muller particularly impressive, but Chelsea managed to hold out, surviving a number of close shaves.

That quickly changed in the second half, as Serge Gnabry scored twice within three minutes to put Bayern 2-0 by the 54th minute. Chelsea failed to ever really got a grip on the game and Roberto Lewandowski made it 3-0 in the 76th minute to all but decide the tie. The Blues simply couldn’t cope with Bayern, who were a class apart and showed that Frank Lampard’s have a lot of work to do in the summer if they want to get back to competing with Europe’s elite.

Manchester City then travelled to the Bernabeu on Wednesday, Pep Guardiola looking to guide his club to its first win over Real Madrid. The Spanish coach sprang a surprise with his line up, leaving Sergio Aguero, Raheem Sterling and Fernandinho on the bench while utilising Gabriel Jesus on the left-wing and Kevin de Bruyne furthest forward. It was a system that had many scratching their heads, but it certainly paid dividends.

It was a fairly passive first half with both sides creating little in the way of clear cut chances. Isco gave Real the lead on the hour mark, but the goal came against the run of play and City were level 18 minutes later when Gabriel Jesus equalised. Substitute Raheem Sterling then won a penalty shortly after which Kevin de Bruyne slotted home to give City two precious away goals. Real captain Sergio Ramos getting a straight red and a ban for the second leg in the process was the icing on the cake for Guardiola’s side.

? Manchester City have beaten Real Madrid for the first time in their history ?#UCL pic.twitter.com/cw0eVart0E

Tuesday also Serie A side Napoli host Barcelona at the San Paolo. Napoli have rediscovered some form recently following a disastrous first half of the season, and Dries Mertens put the club 1-0 up in the 30th minute, becoming the club’s joint-record goalscorer in the process. Barca dominated possession and found their way back into it when Antoine Griezmann netted in the second half, giving the Catalans a precious away goal ahead of the second leg.

Finally, there was a shock in France as underdogs Lyon managed to secure a 1-0 home victory over Juventus. The Italians were poor and failed to register a shot on target, although they will still be confident of making the next round when the two sides meet again in Turin for the second leg.

Arsenal crash out of the Europa League

Thursday evening saw the majority of the last 32-second leg Europa League ties kick-off. Wolves made it through despite losing 3-2 away to Espanyol, having won the first leg 4-0, while Manchester United joined them in the last 16 by brushing Belgian side Club Brugge aside 5-0. However, Arsenal didn’t join them.

The Gunners hosted Greek side Olympiacos at the Emirates, holding a 1-0 advantage from the first leg. Many predicted a straightforward night for Mikel Arteta’s side, but centre-back Pape Cisse gave the visitors the lead and a crucial away goal when he headed in from a corner in the 53rd minute.

Arsenal couldn’t find away through the staunch Greek defence, and with the scores level on aggregate at 90 minutes, the game went to extra time. Pierre-Emerick Aubameyang finally made the breakthrough in the 113rd minute with an excellent scissor kick, and looked to have won Arsenal the time. But it wasn’t to be, as Youssef El-Arabi struck a dramatic goal just a minute from time, securing Olympiacos a famous victory and a humiliating European exit for Arsenal.

Elsewhere, Rangers secured their place in the last 16 with a 1-0 away victory against Portuguese side Braga on Wednesday. Their domestic rivals Celtic didn’t make it through, however, suffering a 3-2 home defeat to FC Copenhagen. Another big name side to go out was Ajax, last season’s Champions League finalists, whose 2-1 win over Getafe wasn’t enough to overturn the first leg deficit.